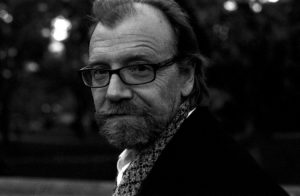 Beloved fiction writer George Saunders has long been known for his daring short stories, collected most recently in 2013’s Story Prize-winning Tenth of December, and his keen interest in moral introspection, highlighted by his much-shared commencement speech for 2013 Syracuse University graduates about the importance of kindness.

Saunders just published his first novel, Lincoln in the Bardo, an unconventional work of historical fiction about the moment when Abraham Lincoln was embroiled in the Civil War and lost his son Willie to typhoid fever.

Jenny Shank: You create a chorus of voices in the commentaries about Lincoln that are taken from historical sources. Did the feeling of these contrary voices inspire the fictional characters you created, or was it the other way around?

George Saunders: It was both. It was like a feedback loop. You’d write a ghost section in which there was a certain rhythm in those exchanges, and that rhythm would be in your head the next time you went to arrange the real sources. And vice versa. You’d get a certain kind of velocity in those factual sections that would make a high bar for the ghost sections.

There was a big breakthrough one day where I was trying to figure out where to put the attributions—because you could put them at the beginning or the end. If you put them at the end, then the ghost speeches are at first glance indistinguishable from the factual ones. I liked that there would be one rule for all of them.

This book isn’t actually that long, so you could always be rewriting all of it. If at the end of the book I had a certain tone, I might find myself revising an earlier section in that spirit.

J.S.: Did you consider it a risk to make a good portion of your book out of other people’s words?

G.S.: Yes. I remember thinking, this isn’t writing, this is typing! But I really wanted to communicate some of that emotion of that image of Lincoln holding Willie’s body.

At one point I was working with the party section. I spent three days on the floor moving quotes around. All the while, I was thinking exactly what you’re describing, “Oh my God, is this just crazy? Am I just wasting my time? I’m not actually writing anything.” But then I looked at the section and thought huh, that’s kind of working. Compared to the earlier one which was much sloppier, it was clearly more emotion-conveying.

Then I thought, maybe we just have to expand the definition of what writing is.

When I first started to make up historical sources, they were always really show-offy and they stuck out like crazy. They had writer with a capital W all over them.

Part of the revision was to go, no, you have to quiet those things down so that they’re indistinguishable from the real ones. It’s like if you were known for being a loud, funny drunk at a party, and then you went to a really nice party and you had to be drunk and yet not loud.

J.S.: You said in a New Yorker radio interview that half the time you weren’t sure it would work—which I guess is related to everything you’ve just been telling me, right? You were inventing it from scratch.

G.S.: For some people it didn’t work. There was a really nice review in the Washington Post, but he described it as “divisive,” and said that some people will love it and some people will hate it. In the early reviews, you really can see that. I didn’t anticipate that, but I kind of like it.

At this stage of life, to be almost sixty, you don’t want to write a book that everybody kind of limply agrees with. That doesn’t seem energetic. Especially because I’m a naturally passive, people-pleasing person. To stir up the shit a little bit feels actually kind of wonderful.

J.S.: In this novel, you focus on a small period of time, going around the same events from different perspectives, much as you might in a short story. Did it help you to find similarities between novels and short stories as you worked?

G.S.: It actually takes place over one night, with flashbacks to Willie’s sickness and a party that took place about a month before he died.

One thing I found was—maybe it’s more about my approach to storytelling. It’s so simple. You’re in a scene, and you kind of have a vague idea of what the scene is supposed to do, but you’re mostly having fun within that scene. You’re trying to make the lines work, trying to have a nice pace, trying to get some jokes in.

You’re working closely within the text on its own merits. Almost like cooking to taste. At some point it will spit out a plot point.

So, say a bunch of people are sitting around a table talking, and one of them is really grouchy because it’s funny. And you go, “I wonder why he’s so grouchy?” At some point he says he hasn’t eaten in a day. And you go, “Ah!” So the next talking point is: Get that guy some food.

It’s nothing really theoretical, it’s coming out of the natural energy of the piece. And then, having done that, you might want to look upstream to the proceeding section. Why hasn’t that guy eaten in two days?

All storytelling is kind of that—there’s a bit of text that you put pressure on that spits out some desire that a character has and then you follow that. The other part is that every scene raises an expectation in the reader’s mind—that’s part of its job is to make you look in and be curious.

The next thing kind of satisfies that, it’s entertaining, but it does that whole process over again. You can see a whole book as a series of creating an expectation and then delivering a skew on that expectation so it’s not totally satisfied.

So it wasn’t actually that different than writing a story. At the end, because it was longer, there were payoffs I was getting that I didn’t know would come.

I always describe writing a story as throwing bowling pins in the air and then catching them, and with a story of this length, there were more bowling pins coming up, and they were coming down in interesting ways that I hadn’t anticipated.

J.S.: You were raised Catholic and then became a Buddhist. What’s the difference between the concepts of purgatory and the bardo?

G.S.: For me, as a Catholic—are you Catholic?

G.S.: So you also have an inner nun, like I do. The way I understood purgatory—and maybe you’ve got a different version—but in Chicago in the ’70s, the idea was it was like detention.

You had screwed up and you go over there in purgatory and you sit there until the end of days and then we’ll decide. You’d made your mistake, and you were in prison, and it’s not terrible and it’s not great, and you feel a little crappy because you were not in the presence of God.

The bardo in the book is not the bardo of Tibetan texts. It’s my own twisted version of it. I think the idea is that you’re only there by your own habits of thought. If only the person in that state could find the power to turn their mind on itself and say, “What’s the problem here? What’s going on?”

In the book it’s particularized by the idea if they realize they’re dead, they can go on. It’s from the ghost tradition.

J.S.: It reminded me of what psychics on TV ghost shows say, that the ghosts don’t realize they’re dead.

G.S.: There’s a great book by Hans Holzer, Ghosts. It’s a thousand pages of ghost séance things, and that’s the riff: if you can get the ghost to understand that it’s 2017 and not 1840, they kind of go: D’oh!

What I really found myself interested in was the idea that our minds are so powerful and when we’re living, the mind is dampened by the body. As crazy as our minds can get, they’re only so crazy because they’re physically housed.

In the Buddhist texts, some of them say, when you die, basically that wild horse gets cut loose, and the mind is incredibly powerful and expansive, omniscient and can go anywhere and see anything, but—and this is the catch—it’s colored by the habits of thought we made in life.

So if you’re fearful and neurotic now, and you cut the tether, that gets writ large. I think that’s where the notions of heaven or hell might come from.

In other words, if you’re self-eviscerating and down on yourself and can’t stand other people, that’s what your mind is doing, but on this global scale. I don’t know if that’s true or not, but it’s a wonderful basis to think about not so much death, but life.

What is my habit of mind? If I’m just sitting there, what am I doing? If you’re like me, you find yourself being defensive and little egotistical—why would that change the moment you die, if the mind goes on at all?

In Catholicism, we would say you’re going to be judged, so therefore you should do better now. For me, Buddhism is somewhat more workable because instead of saying I have to do good, it says I have to notice what I’m actually doing.

Above image by Fort Greene Focus, used with permission under a Creative Commons License.