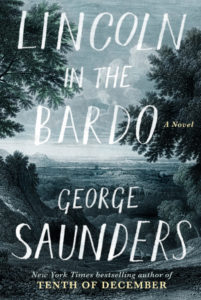 Beloved fiction writer George Saunders just published his first novel, Lincoln in the Bardo, an unconventional work of historical fiction about the moment when Abraham Lincoln was embroiled in the Civil War and lost his son Willie to typhoid fever.

Part 1 of our conversation ran yesterday.

Jenny Shank: In your book the Reverend Everly Thomas learns he’s going to be damned, and he can’t figure out what he did wrong. I’m still puzzling over this. What does it signify? The unfairness of life? Or the fact that we can’t truly know what the consequences of our actions are?

George Saunders: I don’t know what he did, and the idea is he doesn’t either.

In this bardo state, you’re constantly repeating your story and you’re desperately trying to stay there. You become less than you were in life.

You know how sometimes certain old people are hooked on two or three stories in their life and they repetitively tell them? And in the process they forget the other stuff that they did. These ghosts are kind of like that.

I think the Reverend has told these stories so much and he’s been in this place so long that he actually can’t remember whole swaths of his life, including what he did wrong. Built into that is also the notion that maybe we don’t know what the basis for judgment is. In some ways it would be kind of weird if we did.

The story sometimes writes you into a corner. I knew that I didn’t want to say, “Oh, he stole.” Then it would be like you’re playing God in a funny way. So I wanted it to be me not knowing, you not knowing, and him not knowing. So that would imply that there could be a very unpredictable God and also that the Reverend is not in a state to remember stuff.

Right before the Reverend decides to run off with Willie’s body, there is a moment where he thinks, “Whatever I did in life, I did it, and I’m damned for it, but I have to believe that God is still watching me and will credit even the slightest good intention.”

That’s my assumption about most things. If I go to the coffee shop and have a nice interaction with the barista, I don’t know what that does for world peace, but we have to assume that in the great basket of goodness maybe that’s one little micron or one little neutron that you’ve put in there.

That’s the only way that I can figure out how to live, is to say, “Well, I don’t know what this adds up to, but I can do the best I can.”

J.S.: The ghosts are fun. How did you come up with the characters and how did you decide to give them strange ailments?

G.S.: For me, when I’m coming up to a place where I have to make somebody up, it’s almost like driving and taking your hands off the wheel.

I’ve been in this book for a while, and I know what this moment is, so let me just yield control to the subconscious. That means for me to just start typing, almost like trying to do improv, let the person start yapping, knowing that you’ll revise it later. In that way, they’ll cough up something that you need.

Rather than say, I need this kind of character, so let me research them, it’s more like running into the room and letting the character talk.

It’s more intuitive than I would have believed, just dwelling in the moment and seeing what your subconscious comes up with.

The deformities thing, that’s a ghost trope also. There are lots of places where ghosts have weird things. Earlier versions of the novel were not very funny, and I knew it would get sad, and we would need some comic levity. That was a way of making it funny, to have the Reverend with his hair sticking up and Vollman with his huge member.

It’s almost like riding a bike. If the bike is lurching too far over to the sadness, you have to put something in to change it. So once you decide to do that, you’ve got to stick with it, so you’ve got to make sure either everybody has some kind of manifestation, or if they don’t then there’s a reason for that.

G.S.: Part of the fun was to say, whatever happens when we die, it would be really weird if it was what we had expected. Even if you were a lifelong Christian believer, it would be kind of weird if there actually were pearly gates.

There might be pearly gates, but based even on our experience on Earth, when you say, “Oh, I’m going to Tampa,” and you go there and it’s not what you thought, ever.

Part of the book was to build that in a comic way—we all think we know what happens after death. But maybe it’s going to be not only weird but also dorky and comic and inconsistent. Any time that world started to make too much literal sense, I tried to throw a little curve ball so the reader would feel like “I don’t really know what the rules are.” That was part of the plan.

J.S.: I took a writing class with you where you said that often you can figure out the problems with a piece of writing that isn’t working by going down into the sentence level and figuring out which sentences are false, or bullying, or BS, and working through those, and that in turn will solve your larger problems with character or plot.

I’ve always been a fan of Abraham Lincoln’s writing. He always strikes me as someone who left no detectable BS in his writing on a sentence level—which is something I don’t think I can say for any other politician whose words I’ve studied!

Did Lincoln appeal to you as a writer?

Once I realized I was going to have to somehow represent Lincoln, I read speeches that he had written. People who’ve written about his writing emphasize how logical he was. His writing was a syllogistic tool. He would say, if A, then B, and he would reason through it. His late writing especially is so tight and so beautifully reasoned.

I tried to think well, okay he wrote those things, he revised those things, so what would that way of thinking look like raw, in his head? In his speeches, he’s logical and he works with things in an efficient way. I felt like if Lincoln was to write a speech based on those monologues [in the novel] it would be much tighter. But he’s sitting there in a graveyard, and that’s how he’s thinking.

I read an article by John McPhee in the New Yorker about omission. He mentioned that when Time magazine was in the pre-digital days, the process involved that the writer, having edited heavily, at the eleventh hour would get some feedback from the editor, and this process was called “greening.” The editor would be like, “Just to fit it on the page, we have to cut X number of words.” They would make suggestions in green pen.

This was already a tightly edited piece that they would be happy to run just as it is, but for space reasons they had to shrink it. He said this is a great thing to try. Take any piece of writing that you’ve done or somebody else has done and say, arbitrarily, green ten, which means you’ve got to cut ten words. Somebody claimed you could green the Gettysburg Address by six, but if you did seven words you’d ruin it.

That’s kind of a test of a piece of prose, if you can green it.

J.S.: This novel is all written in dialogue. Why did you decide to do that, and what were the challenges of writing only in dialogue?

G.S.: I was trying to avoid that kind of third person voice, you know: “On a dark night Abraham Lincoln entered the graveyard.” That just made me cringe. I didn’t want to do that.

Many years ago I wrote another book set in a graveyard, that had this device almost like a chat line, the dead were kind of talking to and past each other. That was real jangly, I really liked the way that felt. It gave you a lot of freedom to represent contradictory viewpoints. And it just looked good on the page.

At some critical moment, I was talking to Deborah Treisman from the New Yorker about this material. I’d written a play that wasn’t that good. She said, “But why don’t you write it as a novel?” I respect her so much that her saying that turned on this permission light in my head. Within a few weeks, one of my students, Adam Levin, said in an email, “if you ever wrote a novel, I think it would be in a series of monologues.”

You could just do it by having people talk, and then you could avoid using the word “ghost,” which I didn’t want to do, because then you’d see a guy in a sheet. In a way it was a technique of avoiding the banal stuff I didn’t want to do. Sometimes you put it up on its feet and you go, that little move was really kind of fun. This lets me come in from this side angle and get more feeling out of it.

If you really wanted a God’s eye view of that gathering it would be a hundred simultaneous inner monologues. Monologues, in some ways, are the most scientific descriptions of consciousness and even of gatherings.

You go to the marketplace and there are seventeen consciousnesses moving in and out. Sometimes you want the same shirt that I want, and our thought bubbles collide a bit and that makes plot.

It’s the most honest way to represent human beings.