Alastair John Gordon’s newest exhibit, “Souvenirs from the Waste Land,” draws on the postcard collection of Howard and Roberta Ahmanson, philanthropists and art collectors in L.A. Their collection includes mementos from their travels, scenes of architectural interest, and reproductions of works of art—over 18,500 postcards in all.

I spoke with Gordon by phone and over email to discuss his interest in both the gallery and the gift shop. 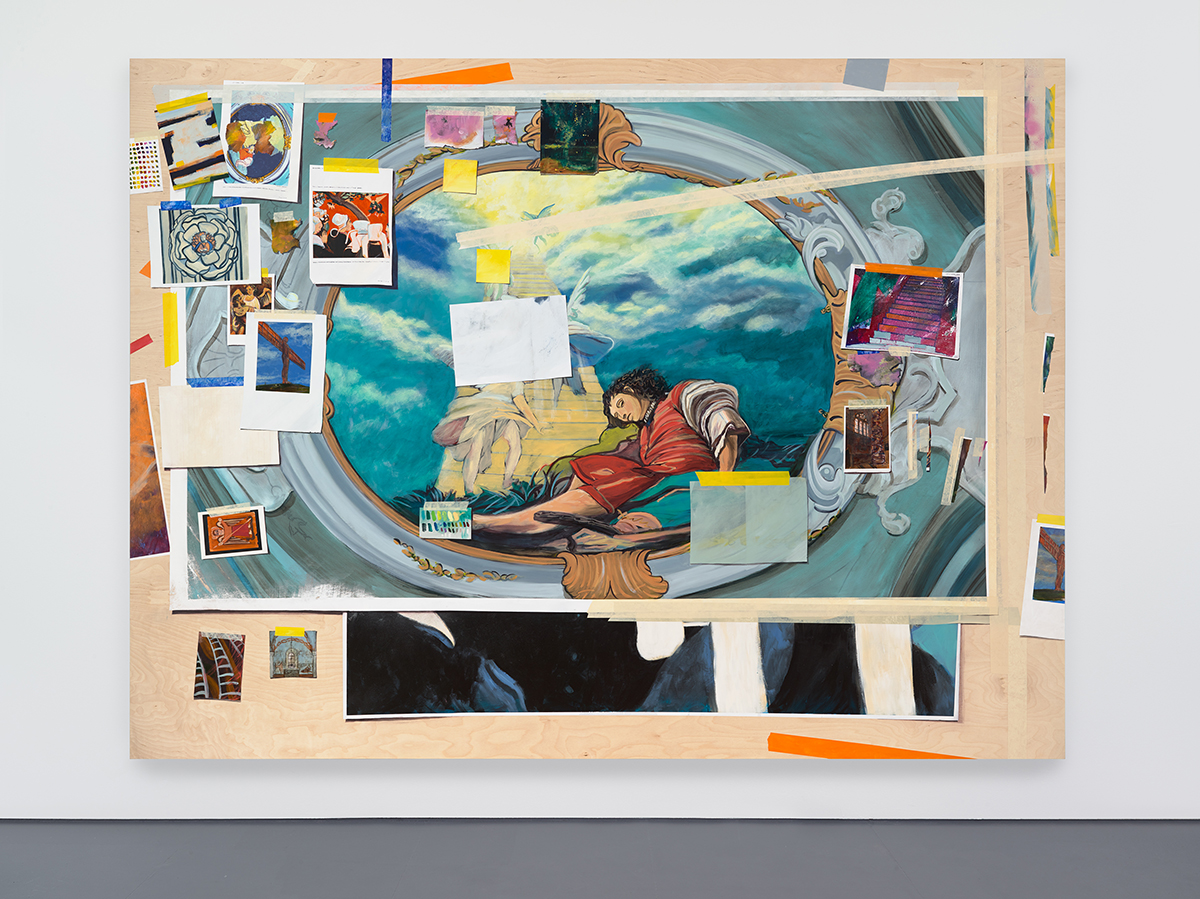 Nicole Miller: Viewers may not recognize the features of abstract expressionism in your work. Can you say more about what you’re taking from that tradition?

Alastair John Gordon: As an art student, I took great delight in studying the artists we now lump in together as abstract expressionists. I was interested in this idea that a mark or gesture in paint could somehow describe something that existed beyond the realm of rational thought or sight.

Specifically, I was interested in Phillip Guston’s attempts toward the end of the movement to bring a more representational language back into the expressive mark making. He saw a need to return abstract expressionism back to a more recognizable visual language and to paint objects that weren’t just gesture but could be located as real things that existed in the world.

To me, the masking tape and postcards in my paintings act like those expressive gestures. They exist in the real world though I use them in a very gestural way. An expressive smear of paint is replaced by a swipe of masking tape or an abstracted splurge of blue becomes a figurative postcard with a blue image on it.

The modernist critic Clement Greenberg posited that each painting medium has its own specificity—something that was unique to that particular field or material. He described how paint could transcend its material components to describe non-physical things like ideas, questions, or emotions. For example, Rothko’s field paintings are like a deep void that seem both endless yet bound on the flat surface of the canvas.

I see a link between this and the early church notion of the sacrament. Here, everyday objects such as bread, cups and rings transcend their material parts.

NM: I haven’t come across this reading of Greenberg before—where you see transcendence, others might see immanence.

AJG: I suspect that Greenberg would contest my interpretation of his ideas. Transcendence implies a higher ideal than immanence. As far as I see, Greenberg never uses the term “transcend,” and no doubt I am bringing my own agenda to his writing, but I hope he would feel sympathetic towards a strip of masking tape being used as a painterly gesture.

The great thing about a painting is that you can hold together ideas that were never meant to co-exist or that might even contradict.

NM: It strikes me that you’ve found a different solution to the problem Greenberg diagnosed. For him, pure abstraction was the only way to address the representational illusions of late-capitalist, consumer culture. But you’ve turned consumer objects into gestures.

AJG: The titles of the paintings are sort of interesting at this point. The titles themselves are found objects. Some of them come from T.S. Eliot’s “The Waste Land,” some are from novels by Iain M. Banks, some are from Michael Crichton movies.

These lines begin as part of a poem or a highly valued text; they’re read online or misquoted in a movie, and they enter popular usage; then I reintegrate them into an original work of art. 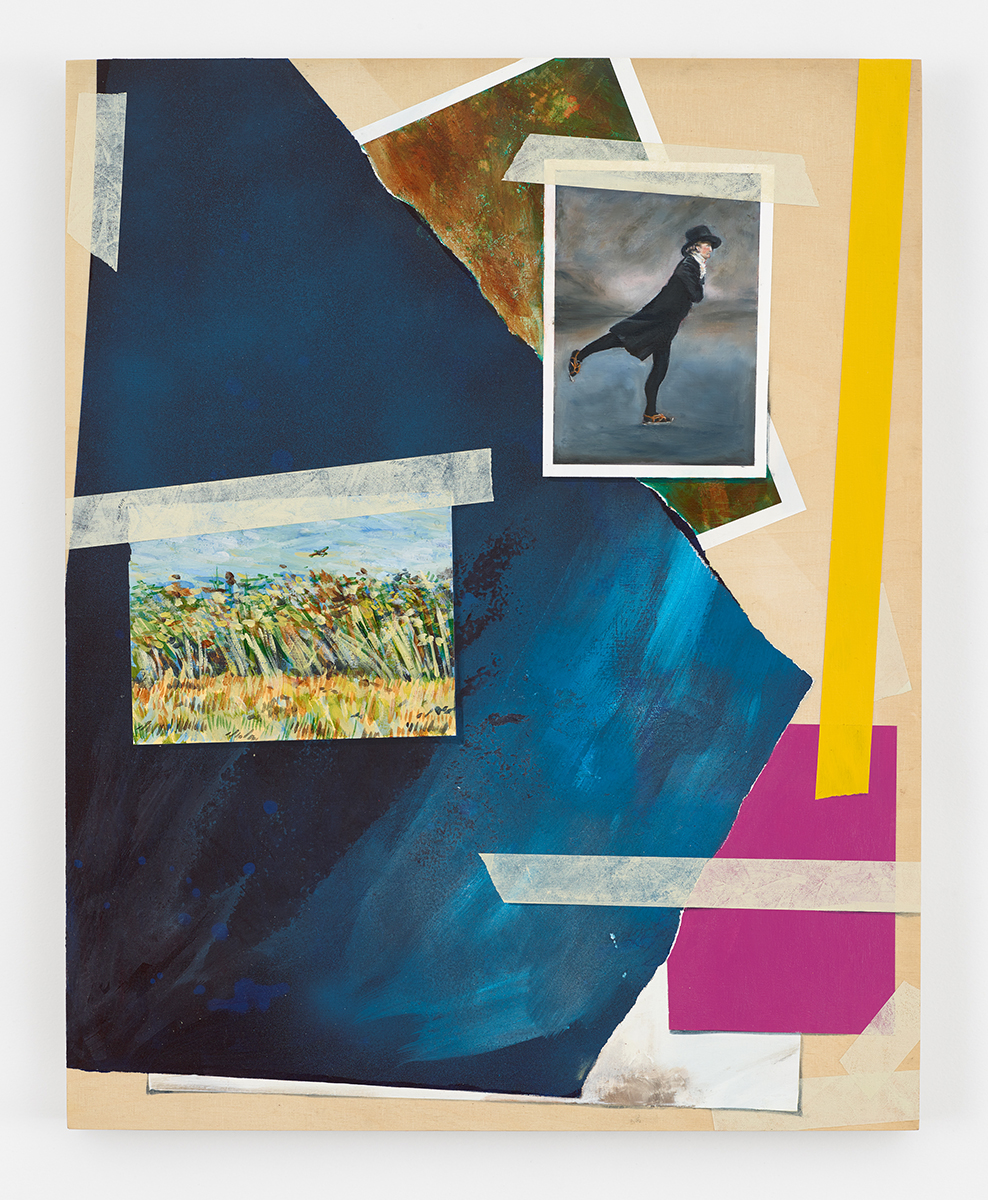 NM: In your exhibit at the Ahmanson gallery, your paintings are mounted beside some of the original postcards displayed in glass vitrines. Tell me about the relationship between the two.

AJG: Social critic Susan Stewart wrote a book called On Longing that talks about collections and curating. She claims that once you put an object into a box or behind glass, it becomes a dead artifact. But if we find connections between the paintings and the postcards, then we sort of reanimate them.

Conversations can then emerge, and maybe that becomes another work in itself.

NM: As you were talking about wunderkammer, you reminded me about a museum in L.A. called the Museum of Jurassic Technology. Lawrence Weschler wrote a wonderful book that captures the uncanny quality of their collections, which seem to blend fact with fiction—or trompe l’oeil.

AJG: Oh, I’ve heard of this. I should go! It’s almost as if the historical artifact—its authenticity or the story behind it—somehow isn’t as important as the representation of it.

In the Atelier de Cézanne in the south of France, there are two identical painting palettes. One of them belonged to Cezanne and the other one is a replication of it made years later. There was a fire at the museum, and they lost the documentation identifying which palette was the original. They don’t know which is which, and the carbon dating can’t place it, so they just show both of them.

In a similar way, I was in Orlando about five years ago, and I visited a theme park called the Holy Land Experience. At the museum there, they have historical artifacts and old biblical scrolls and Martin Luther’s Bible and cheap plastic replicas of old Bibles, all together in the same vitrine.

It brought to mind what Umberto Eco wrote about hyperreality—this idea that something is totally fake and knows it’s fake, so it has a kind of authentic fakery about it. I find that in making these paintings, it’s a form of the hyperreal.

NM: And in some way it forces the audience into a position of having to look closer. That position of uncertainty and being off balance forces a different kind of looking.

AJG: I’ve had two paintings returned from galleries this year with scratches in them on the edges where the masking tape would be, where someone’s gone in and tried to peel off the tape. Which I guess is a nice little compliment to the painting. 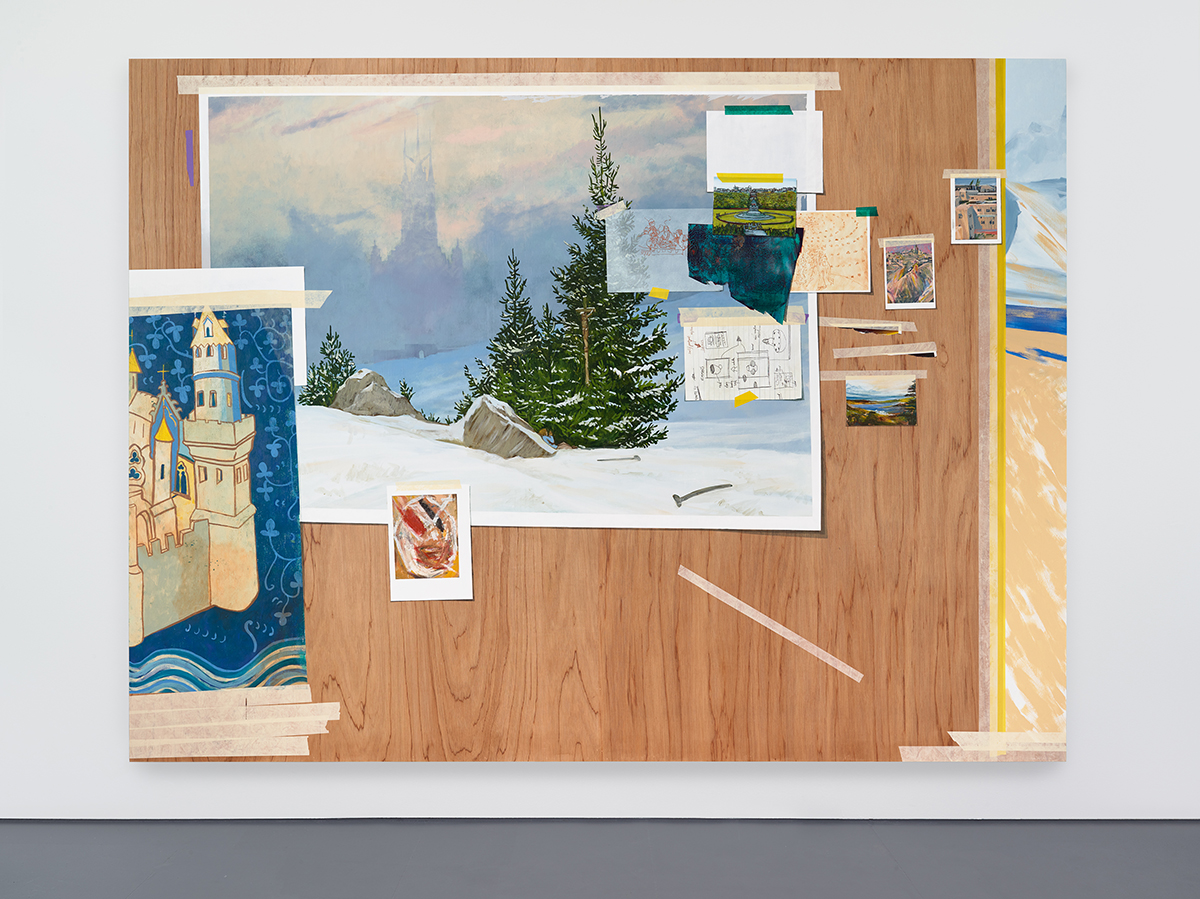 Nicole Miller is a Brooklyn-based writer, editor, and teacher. A former Milton fellow at Image, she's also received residencies from the Wassaic Project and the Marble House Project. Her fiction and nonfiction have appeared in Guernica, Fence, Image, The Atlas Review, Hyperallergic, and elsewhere. She serves as an editor for the digital journal Underwater New York.