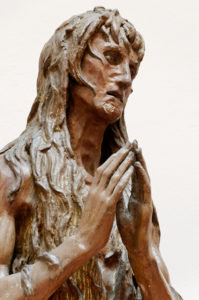 The following is a response to Morgan Meis’s letter posted yesterday.

Thanks for throwing down this particular gauntlet. Yes, we adopted Dostoevsky’s phrase from The Idiot, where one of the characters attributes the saying “beauty will save the world” to the eponymous hero of the novel, Prince Myshkin.

I’m well aware that any slogan or mantra can quickly become a stand-in for real thought, for Jacob-and-the-angel wrestling with difficult, complex subjects. Neither I nor the extended Image community is immune from that sort of danger.

We acknowledged that a while back when we published an entire symposium on the topic of “The Word-Soaked World: Troubling the Lexicon of Faith” in issue #75. The purpose there was to interrogate and “trouble” frequently invoked terms (art, faith, mystery!) that had become anodyne through thoughtlessness and over-usage.

And just for the benefit of readers wanting to pursue these issues further, I would point out that I’ve dealt with some of your challenges in essays like “The Wound of Beauty” and “The Tragic Sense of Life.”

Given the large amount of historical baggage attached to the word beauty, it is never going to be a word that we can use without qualms and qualifications. That’s why T.S. Eliot once wrote:

We mean all sorts of things, I know, by Beauty. But the essential advantage for a poet is not to have a beautiful world with which to deal: it is to be able to see beneath both beauty and ugliness; to see the boredom, and the horror, and the glory.

As you can see, Eliot fundamentally agrees with your insistence that the truth of the world is hardly beautiful in the conventional sense. But Eliot is also struggling to rescue beauty in his own way, I think. By pointing out that the poet goes beyond conventional ideas about beauty and ugliness to deal with boredom, horror, and glory, he’s grasping for a sort of synthesis that accommodates both the good and the bad in the world.

In other words, boredom and horror are there, but so is glory: the repulsive and the attractive together.

Well, you might say, that’s simply a formula for an eternal Manichean battle between equally ranged forces of light and dark—a scenario that ends in stalemate.

But that would be to ignore the role of the poet herself—the role of art. For in the poet’s hands, these things are welded into a larger unity. The work of art, then, encompasses the truth within a form. And that form, in turn, achieves a beauty involving not only the proportion, harmony, and radiance (to borrow terms from Aquinas) of its parts, but the truth that it comprehends.

When talking to students about these matters, I sometimes ask them a question. “Which would you say is more beautiful: a mass-produced statue of the Blessed Virgin Mary, rendered in a sickly-sweet, sentimental fashion or an exquisitely crafted statue of a prostitute lying in a gutter?” That one at least gives them pause.

Or take an actual work of art: Donatello’s Mary Magdalene. This is not the Mary Magdalene we’re accustomed to seeing: a sensual, beautiful woman who may have turned toward matters of the spirit, but with a passion that reminds us of her former fleshly life.

No, Donatello’s Magdalene is an older woman, one who has spent decades of her life devoted to ascetical practices—a penitent in every sense of the word. Like John the Baptist, she’s a hollow-eyed, ragged figure. And yet there is a radiant beauty to her prayerfulness, to the evidence of her endurance of the slings and arrows of life, her hope for salvation. In short, it’s a work of great beauty.

But, you might object, isn’t the aestheticization of suffering itself a kind of falsehood? That’s one of the hardest challenges ever thrown down against the kind of argument I’m making and I don’t take it lightly.

This is where we need to move on to another level, to nothing less than a theology of a fallen world. I won’t drag out the quotations I usually use in this situation from the likes of Joseph Ratzinger and Hans Urs von Balthasar, but I will paraphrase what they’ve taught me.

The truth is that even the Greeks, who had such a love for the ideal, the perfect, the “classical,” knew the centrality of evil, brokenness, and suffering. How else do you account for Greek tragedy or the way that Aristotle attempted to account for the effect tragedy had on its viewers?

His Poetics claims that tragedy has an effect on the viewer that is purgative, that acknowledges both the frailty and contingency of human life (even a great man like Oedipus will bring about his own demise and suffer) and, in the process, asserts the dignity and, yes, beauty of that which is broken.

Christianity builds on this intuition by showing us, in the figure of Christ, someone who is both beautiful and nondescript, utterly perfect and reduced to the humiliating death of the cross. In other words, the Christian vision shows us that beauty can be found not only in the ideal but when a good, lovely thing is broken.

You can break and puncture the good—but, lo and behold, through the ugliness of that shines forth a beauty that cannot be defeated by evil. The Cross becomes the quintessentially beautiful work of art in Christendom.

One of the odd things about attacks on beauty is that they tend to come from an excess of moralism. In that sense, there is little difference between a Marxist or postmodern attack on beauty as falsehood and the sort of puritanical iconoclasm that has run throughout Western religious traditions from the very beginning.

Beauty, the moralists argue, is a distraction from justice, from the harsh truths of the world. But the opposite could also be argued. As Elaine Scarry has written in On Beauty and Being Just, beauty has the effect of making us care for what is fragile and evanescent.

Beauty is thus not a sugarcoated decoration around the bitter pill of truth but something that goes to the very core of reality. So, yes, I would say that is “irrefutable”—an attraction that pulls us toward reality and asks to trust in its essential goodness, in spite of all that mars it.

Well, I’m out of space. I don’t know how well I’ve responded to your challenge but I’m very glad you made it.