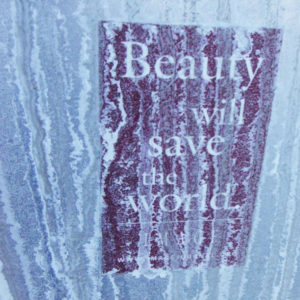 When we first started our conversation (see posts here, here and here for background), I thought we were having a debate about the declining relevance of religious intellectuals in today’s public realm. But that’s not what it was really about. At its heart, this conversation has always been about beauty.

So, I think we should get right to that, to beauty. I don’t know the story of how “Beauty Will Save the World” became a motto for Image journal and for the Glen Workshop. I’m assuming it is a reference to Dostoyevsky’s The Idiot.

I think I remember reading somewhere, in one of your essays (but I forget which one) how you’d come across the idea of beauty saving the world through Solzhenitsyn. Was it from Solzhenitsyn’s Nobel Prize Lecture? In the lecture, Solzhenitsyn says:

One day Dostoevsky threw out the enigmatic remark: “Beauty will save the world.” What sort of a statement is that? For a long time I considered it mere words. How could that be possible? When in bloodthirsty history did beauty ever save anyone from anything? Ennobled, uplifted, yes—but whom has it saved?

The next sentence in the lecture reads as follows:

Is that what you were getting at? Is that how beauty will save the world? Are we after a “peculiarity in the status of art” by which it becomes “irrefutable?” I’m curious as to how you would define that peculiarity, where it comes from and what it means.

For my own part, I was educated in an overwhelmingly secular scenario, capped off by a PhD in philosophy at the New School for Social Research. At the New School, there was not much talk of beauty. If the subject came up, it tended to be dismissed with a smirk and a knowing nod.

Beauty was something suspicious. Beauty was the means by which we are fooled, tricked, bamboozled, hoodwinked. To look at the world honestly, I was taught, was to look at it through a dispassionate lens, at best—or, at the very least, through a lens tinctured with a sense of horror.

This played itself out aesthetically in the following way. I prided myself on the degree to which I appreciated works of art that refused beauty altogether, or that sought to destroy beauty.

Thinking along these lines, I suppose I would have said, twenty years ago, that the duty of art is to give us the world as it really is. The truth of the world as it really is, I would have gone on, is something ugly and dark. The only glory and condolence to be found in expressing that dark truth is in knowing that you’ve proved your mettle, that you can take the hard medicine. When you’ve accepted the hard truths, you’ve earned your place at the grownup’s table.

My overall outlook was essentially Nietzschean in this regard. It could be summed up in the following formula: Beauty is false, truth is ugly.

It goes without saying that I don’t hold that position today. I wouldn’t be writing for Image or regularly attending the Catholic Mass if I did.

But I’ll also confess that I harbor a residual distrust of beauty. It goes along with my habitual distaste for certain forms of contemporary Christianity, which claim, against all prevailing evidence, that life is somehow supposed to be pleasant and nice and that believing in Jesus ensures this pleasantness.

I rather think that life is fundamentally about suffering; suffering, and then, ultimately, what you do with that suffering. The only way I can make sense of creation is as a kind of divine challenge. This is the gauntlet God seems to have thrown down: Come to love this world in and through the pain and the loss and the sadness.

To look for beauty as a sign of God’s goodness is to ignore the uncomfortable fact that the path to salvation is, alas, the way of the Cross. You can call this path “beautiful,” but then you are using the word differently than we are using it when we admire, say, a sunset. So why even use the word?

On the other hand, we can’t avoid the word, either. I came across the following, by Andrew Sullivan, just the other day:

I’ve managed to see Scorsese’s Silence twice in the last couple of weeks. It literally silenced me. It’s a surpassingly beautiful movie—but its genius lies in the complexity of its understanding of what faith really is. For some secular liberals, faith is some kind of easy, simple abdication of reason—a liberation from reality. For Scorsese, it’s a riddle wrapped in a mystery, and often inseparable from crippling, perpetual doubt. You see this in the main protagonist’s evolution: from a certain, absolutist arrogance to a long sacrifice of pride toward a deeper spiritual truth. Faith is a result, in the end, of living, of seeing your previous certainties crumble and be rebuilt, shakily, on new grounds. God is almost always silent, hidden, and sometimes most painfully so in the face of hideous injustice or suffering. A life of faith is therefore not real unless it is riddled with despair.

You’ll notice that Sullivan calls Silence “surpassingly beautiful.” “But,” he goes on to say, “its genius lies in the complexity of its understanding,” which culminates in the truth that a real life of faith is “riddled with despair.” That sounds right to me.

In the way you often write and speak about faith, Greg, I suspect that it sounds right to you too. If this is true, I wonder how you define ‘beauty’ such that it is compatible with this point of view.