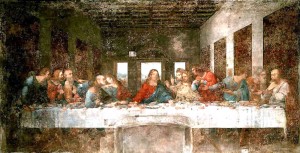 This poem is a meditation on Leonardo da Vinci’s famous painting, “The Last Supper.” But the meditation moves in an unexpected direction. The first stanza stays with the painting, though with a comical interpretation of “torn bread” scattered on the tablecloth. In stanza two, the poet moves to the wine—“or seeming / lack of it.” In the painting, no chalice is visible—nothing “bigger than a shot glass.” It’s from this image of a shot glass that the poem’s speaker takes off in stanza three. He seems to be pondering its meaning, as he twice says “that makes sense.” What makes sense now to the speaker is that a single shot of liquor suffices: it reveals “the power” that a bartender serves (as Jesus serves God?); it is sufficient for lingering camaraderie. From here, the speaker reflects on other smallnesses that are sufficient in life: “Only a heartbeat /of belief is necessary.” And “by small increments we learn to taste.” To taste what? The poem doesn’t say, but in the context of the de Vinci painting, I recall a song that we often sing during Communion in my Catholic parish: “Taste and See the Goodness of the Lord.”

“The Last Supper,” by Jack Stewart

Pieces of torn bread on the tablecloth.
Plates empty in front of them as if they
have just removed the halos they will wear
in a few years. Jesus holds out his arms
like he is scolding them for such a mess.
They look startled, like they are seeing it
for the first time: it couldn’t be their fault.

Leonardo claimed this is the moment
of Christ’s announcement of betrayal,
and of course it is not clear who Judas is.
But what I notice is the wine—or seeming
lack of it. No goblets. No chalice.
The grail no bigger than a shot glass.

Jack Stewart attended the University of Alabama and Emory University, where he received his doctorate, and was a Brittain Fellow at the Georgia Institute of Technology. His work has appeared in Poetry, Dark Horse Review, Gettysburg Review, Southern Humanities Review, and other journals and anthologies. He currently lives in Montgomery, Alabama, with his wife and two daughters, and teaches at the Montgomery Academy.