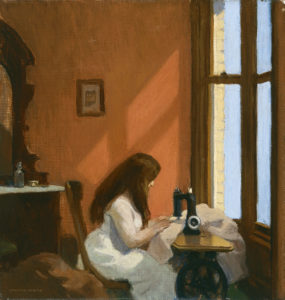 We don’t think enough—or at least I don’t—about how objects can contain memory. But Murray Bodo’s poem “Sewing Box” shows us how: in this box in which memory is literally contained. Each of the four stanzas takes us deeper into the box. At first it’s just “the busy / sewing box I’d organize on visits home.” So it’s a box, we guess, that belonged to the speaker’s mother. In the second stanza, it becomes “a memory chest,” as the speaker recalls his mother’s using it “to mend socks and hearts” after a hard day’s work. At the start of stanza three, the box becomes (alarmingly) “a sepulcher”; evidently the mother has died, and the box remains untouched between the speaker’s visits home, its “spools of thread, / buttons, thimbles, needles, and pins” all “stilled.” Then the final stanza heralds an unexpected discovery: “This year I found a hidden drawer / not noticed before…” The speaker finds in the drawer long-ago objects, including a needle-holder that he “made / for you in fourth grade.” But then the drawer reveals even more unexpected contents: holy cards and other religious aids to prayer. With these, which ends the poem, I see the box sacralized—as at the same time, the entire history of the speaker’s relation to his mother is sacralized as well.

I have the sewing box and pillow cases
you embroidered—having no children
to give them to. They comfort and hurt,
these flowered calligraphies, and the busy
sewing box I’d organize on visits home.

It’s a memory chest, dream embroiderer,
and you light of foot, hurrying home
from drudgery at the Elite Laundry
to mend socks and hearts; later your step
finical, trying to sidestep pain, your sewing
labored—with little left for me to organize.

It’s a sepulcher whose spools of thread,
buttons, thimbles, needles, and pins
are stilled, except for this my anniversary-
fussing with loose threads, drawing
them out straight, patting and checking
to see what’s there, what’s possibly
not there, these, can it be almost
twenty years of slow erasure?

This year I found a hidden drawer
not noticed before, a map of
home, avenues of nouns and static
verbs: Irontex Renew-a-Pocket,
25 cents a pair, no sewing, iron on!
And the felt needle-keeper cutout
of a bonneted girl’s silhouette I made
for you in fourth grade, whose black
bonneted head you trimmed in white
crocheted frill.
________The Irontex envelope
contains the patches, two holy cards,
prayers to Our Lady and a pamphlet
entitled, La Comunione dei Fedeli.

Murray Bodo is a Franciscan priest. His most recent book is Mystics: Ten Who Show Us the Ways of God (Saint Anthony Messenger). His volume of poems, Wounded Angels, was published in the spring of 2009 by Bliss Fool Press of Windermere, England.

Above image is Edward Hopper's "Girl at a Sewing Machine,” used with permission under a Creative Commons license, via Wikimedia Commons.