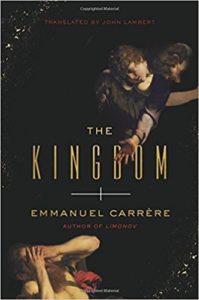 This post appears as the Editorial Statement in Image issue 92.

When The Kingdom landed on my desk with a thud, I could tell that it would pose a challenge—that it would be a book I had to contend with. In addition to being a substantial tome, it comes with the cultural imprimatur conveyed by its publisher, the venerable Farrar, Straus and Giroux, whose backlist includes the likes of Czeslaw Milosz, Seamus Heaney, and Flannery O’Connor.

From the publicity materials I learned that its author, Emmanuel Carrère, is one of France’s leading writers and intellectuals, the author not only of novels and memoirs but also of film and television screenplays, some of which he has also directed. One of these was a series about people who mysteriously come back from the dead, not as zombies, but as people resuming their normal lives: Les Revenants, remade in North America as The Returned. Carrère’s books include My Life as a Russian Novel and The Adversary, the chilling story of a Frenchman who posed as a doctor for twenty years, then killed his own family in a doomed attempt to prevent the truth from coming out.

The Kingdom begins with a memoir of Carrère’s fleeting conversion to Christianity more than twenty years ago, the moment when, as he put it at the time, he felt “touched by grace.” You can tell by the way he writes about it now that Carrère is embarrassed by the sentimentality of this phrase. But at the time his devotion was sincere, manifesting itself in daily Mass attendance and a series of notebooks in which he recorded a running commentary on the Gospel of John.

And yet, only a couple of years later, he would relinquish his faith. “I forsake you, Lord,” he wrote in the final notebook. “Please do not forsake me.”

There’s something touching about the ambiguity of that farewell message. Later, after finishing The Kingdom, I would realize that this sort of ambiguity is central to his method: he will make an assertion and then allow an almost diametrically opposed view to sneak in the back door, bringing to mind Walt Whitman’s “Do I contradict myself? Very well, then I contradict myself, (I am large, I contain multitudes.)”

More puzzling than his penchant for self-contradiction is the vagueness of Carrère’s writing about the context of his conversion experience. One has to look for clues as to why faith answered a need he felt at that time. He says at one point that he was looking less for “metaphysical flashes than rules of conduct.” He adds that faith enabled him to see his own griefs and problems as “ordeals” set by God to test him.

Perhaps someone wiser in the ways of faith could have told him that these are not the healthiest of reasons to embrace religion, but it is clear that the experience for him was largely solitary and private. If he’d met a wiser guide and opened himself up to a wider community, he might have learned that the attempt to find in religion a set of behavioral constraints rather than an experience of a presence that loves you in spite of your behavioral waywardness is doomed to frustration. He does not seem aware of the irony that in relinquishing his faith he isn’t freed from the hothouse of the isolated self but more deeply immersed in it.

His conversion/de-conversion story becomes the impetus for all that follows in The Kingdom. Looking back twenty years later, Carrère decides to investigate the experience by embarking on a wide-ranging exploration of the personalities and history behind the writing of the New Testament, with a focus on Saint Luke—his Gospel and his chronicle of the early church, the Acts of the Apostles.

Reading The Kingdom, it’s not hard to see why Carrère has become a successful author, at least on his home turf. His sophisticated but conversational tone, his ability to translate a lot of historical information into pleasantly digressive scenes and historical exposition, his savoir faire on and off the page—all this makes a long, complex narrative go down easily.

But the deeper I got into the book the harder it was to retain a sympathetic connection to the author. Some of this no doubt arises from my resistance to certain contemporary literary trends. As for example the claim that The Kingdom is, at least in part, a novel. What this boils down to are a few passages where Carrère imagines scenes with some of the principal players such as Paul and Luke. But in the current cultural moment the fad for blurring the genres of fiction and nonfiction felt like one more thing to cross off a literary checklist than a serious experiment in form.

My goodwill was further eroded by some of his mental tics, including the repetition of the cliché that “religious neuroses” are “an abhorrence of sex, agonizing scruples, overarching sadness” (modern literature contains abundant evidence that such problems afflict the secular as well as the religious). Or take the fresher, but still rather odd assertion: “You have to admit it, Jesus didn’t seem overly thrilled about breasts or wombs.”

But beyond these exasperations there is, in fact, a more substantive core to The Kingdom, which consists of Carrère’s sifting through the human and textual puzzles of the New Testament. This territory has been crisscrossed for centuries, but mostly by specialists, so if Carrère has little to offer by way of revelatory interpretation, at least his readership will find much of the material new and intriguing.

Above image by Raphael Labbe, used with permission under a Creative Commons License.