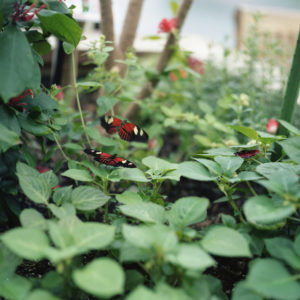 When we bought our new house, a jungle of weeds marked the front yard. I was annoyed. The previous owners—moving out of the state—had obviously phoned in the upkeep in their last months of ownership and I wondered aloud what else they would abandon in their final nights. Would we come home to a clogged bathtub? A basement of mice?

Our realtor laughed and assured me this was not, in fact, neglect but actually a “butterfly garden”—a bonus! When I told her I intended to cut it down—every last stalk—she paused for a long time, finally asking: “Why do you hate butterflies, Bryan?”

I do not hate butterflies. In fact, I love butterflies. When I see a monarch flitting through the air, I stop and watch. There’s an elegance to its flight, an against-all-odds mode of travel that somehow carries them thousands and thousands of miles each year. It seems impossible. The stuff of parables.

This, of course, is the reason behind butterfly gardens. Intentional sanctuaries. A marked path dotting yards across the country, encouraging monarchs to make this awesome journey year after year, generation after generation.

When we first moved in, one of the neighbors—who had also recently purchased a house on the block—told me this particular neighborhood was known for its commitment to landscaping. He loved this. Throughout the summer, I would see him plucking single, rogue leaves from his lawn, his entire body beaming with a strange pride.

I didn’t tell him then, but my approach is decidedly different. Life is too short to obsess over weed-and-feed, aeration, or the sort of discipline it takes to keep the edges of your lawn manicured like a military flattop. If my grass is below six inches, if the leaves are up before the snow comes down, I’m doing my part.

But even to a horticultural derelict such as myself, this “butterfly garden” was an eyesore.

It grew wild, with no discernible plan or intention. Well-meaning friends told me to look for milkweed, for various other plants that would serve as a sanctuary to the migrating monarchs. And we looked. I printed out pictures. I checked out books from the library.

If there was, in fact, a butterfly garden hidden among the twist of weeds and brush—I was determined to find it. Because I’m not a monster. I know butterflies are important to the ecosystem, a sign of health. But on a more basic level, imagine a world without butterflies.

Still, every time we pulled up to the house, a strange anxiety would grip my body and I’d sigh and indicate that it would be a good weekend to bring it down. The whispers of a Bible verse in my ear, You of little faith…

Of course, my kids lost their minds with grief. With outrage. I could see the idyllic scenes playing out in their heads—the sun dying behind them as butterflies gently descended on our house, landing on their outstretched fingers. Perhaps even on their noses, as they laughed with delight.

It took my son’s tearful plea for me to relent. His logic was bullet proof: how did I know butterflies wouldn’t show up at our house? It put me in a bit of a tailspin. As a Christian, I supposedly believe in things unseen. Ordinary things become, as Augustine describes, outward and visible signs of an inward and invisible grace.

So we kept the butterfly garden for the summer and, despite a near-constant watch, I didn’t see a single monarch. Every so often my children would catch me on the porch, staring at the “butterfly garden” and wondering at the cost of an axe. Perhaps reading my mind, they’d almost immediately report a sighting. Butterflies that always disappeared by the time I walked outside. Breathless promises that they were everywhere, I was just unlucky. Followed by indignant claims that I didn’t want to see them.

They gently checked the underside of plants for monarch eggs. They searched for caterpillars—or even evidence of caterpillars—among the leaves. But there were none, not a chrysalis in sight. Months later, a woman walking her dog told me that—while it may have been a butterfly garden once—it was now too dense. Too choked by weeds.

A few weeks later, just after the leaves started falling, we cut it down.

For the next several months, winter hid the scarred earth. Every time I passed from my car to the house, I felt a needle of guilt. We’d waited until I was sure there were no last-second Monarchs, hustling through Minnesota like a family late for a plane.

But it wasn’t that. I was convicted by something deeper: Could I no longer live in mystery, in wild expectation?

When the snow melted, a patch of dirt and exposed roots greeted us. It looked like a bad haircut, a haphazard hack job. We had a plan, of course. After months of research, I’d settled on a selection of ground covers. They wouldn’t grow high. They’d choke out any of the rogue weeds that considered resurrection.

But most importantly, they required the bare minimum of tending. Once they were in the ground, that was it. And it looked good. Drops of golden headed Scotch Moss. Mazus, already flowering. I had successfully asserted my will over something much bigger, much grander than myself.

The following week brought the sort of torrential rain that usually only happens in quick, stormy spurts. But every day was a downfall. I counted it as a sort of vague providence, as now I wouldn’t have to get up early to water the new plants.

On a rare, clear morning, I pulled my bike from the porch and was getting ready to ride to work when I spotted it. In the middle of the newly reformed garden, a shoot had come up. It was small, nothing more than a couple of inches. But it reached from the ground like a hand asking for help. Already late and not interested in getting caught in rain that would last for another four days, I left it.

A week later, there was a stalk of young, defiant milkweed.

Do I believe God caused this to happen? Of course not. Even my elementary knowledge of perennial plants can explain this. But perhaps there is something to be said about leaving our lives a bit wild. About the danger of trying to live outside of mystery. And maybe I’ll have more to say when those first monarchs appear in a few months. Because God knows my kids will be watching.

Bryan Bliss is the author of the novels Meet Me Here, No Parking at the End Times and the forthcoming We'll Fly Away, all with HarperCollins. He holds graduate degrees from Seattle Pacific University and Vanderbilt Divinity School. He lives in Saint Paul, MN with his wife and kids.

Above image by Chase Elliott Clark, used with permission under a Creative Commons License.