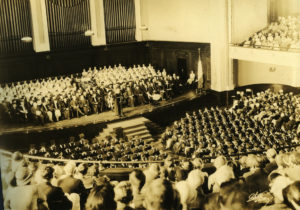 The following two-part post was originally delivered as the 2017 commencement address for Trinity Academy in Portland, Oregon.

Thank you for the high honor of inviting me to speak on this special occasion. My heartfelt congratulations to you graduating seniors for having reached this important milestone in your lives. Given the deep and demanding curriculum you’ve just completed, that is quite an achievement and I hope you feel justifiable pride in having reached this point. I know that your parents, family, and teachers feel that pride.

This is a special moment for me for a number of reasons, including one that you could have no way of knowing about. At a conference nearly forty years ago, when I was but a green behind the ears undergraduate student, I met a gifted, imaginative man named Kerry Koller, who shared with me his plan for founding Trinity School, which would be based on a wide-ranging liberal arts curriculum that integrated faith and learning according to classical educational principles going back to the medieval and Renaissance eras.

Now here I am, speaking to a graduating class from an institution affiliated with a whole network of Trinity schools.

Thinking back to that meeting with Kerry the immortal words of Darth Vader come to mind: “I’ve been waiting for you, Kerry-Wan. We meet again, at last. The circle is now complete. When I left you, I was but the learner; now I am the master.”

Seriously, though, I still consider myself the Padawan to Master Kerry and I salute him across these four decades with respect and affection for the movement he began and continues to inspire.

Now comes the segment of the commencement address that millions of graduating seniors down the years have collectively dubbed the “blah blah blah” part. Fortunately for us all, there are only about 1700 more blahs to go so it won’t take long. I also have to warn you that I may seem to stray from the topic of education into some rather mystical mumbo jumbo but I promise I’ll bring it back home again.

The topic I’d like to address today is time and how we live in it. More specifically, I want to talk about the present. The here and now.

If you burrow down into the Latin etymology of the word you find that it means “I am before—or, in front of—something.” Of course the word seems to encompass so much more. It is that mysterious place which exists between past and future, a moment that is forever moving and yet forever still. The poet T.S. Eliot called it “the still point of the turning world.”

For you graduates this present moment is, roughly speaking, the dividing line between childhood and adulthood, between the rich cultural heritage that you have been studying so assiduously over the years, and the beautiful, broken world that lies before you.

To be sure, most of you will be continuing your education in one way or another in the coming years, but this is one of the first great dividing lines in your life.

Man, that does sound a bit heavy, doesn’t it? Maybe it’s a mercy that it tends to go by in a blur.

That blur is a reminder of just how elusive the present can be. It turns out to be remarkably difficult for human beings to be present to the present. My wordplay here is deliberate, for one of the most profound mysteries we will ever know is the connection between “the present” and “presence.”

“The present” is the moving now in which we live and move and have our being; “presence” is being fully attentive to the moment, fully “there,” “in front of,” with all that you have and are as a human being.

We live in a time when the present seems more frantic, more inundated with information and noise, than ever before. But don’t worry: I’m not going to go on yet another rant against smart phones. I have nothing against Snapchat. Or even funny cat videos on Facebook.

Nonetheless, even though such things might seem to develop our capacity for attention, the quality of attention in the digital world is largely trivial and inane. There are times when it is fine to be zoned out, amused, or diverted. But we know that we’re gorging on a digital diet the way we gorge on fast food. It is entirely another thing altogether to be attentive, to be truly present.

The great French thinker and mystic Simone Weil said that “Attention is the rarest and purest form of generosity.” There is the connection with present, because to be present to someone is an act of generosity, an act that is simultaneously a denial of self and a gift of self. Weil goes on to say that “Attention, taken to its highest degree, is the same thing as prayer. It presupposes faith and love.”

Those are pretty big presuppositions; most of the time we fail to muster much faith or love. Living in the present is a difficult, which is why the past and future hold a certain allure and even, at times, become an escape mechanism. This is a phenomenon that touches on every aspect of our lives, from intimate, personal issues to the vast political and cultural problems affecting every part of the globe.

When it comes to our personal lives, it is easy to become stuck in the past, living in regret about bad decisions and missed opportunities. The future can also become an obsession, the place where all problems will be solved if only our circumstances change into the image of what we think they should be.

Deep down we suspect that to dwell in either past or present too much is to turn them into idols. Neither past nor future offers us the possibility of change; we can only change in the present.

On the larger social plane, these addictions to past and future are also clearly visible. For one thing, the future ain’t what it used to be. In the previous two centuries, men and women dreamed that the future would be glorious and triumphant, whether that was through the dictatorship of the proletariat or some other means of scientific or political evolution. Nowadays we fear the future.

Above image by Richard, used with permission under a Creative Commons License.