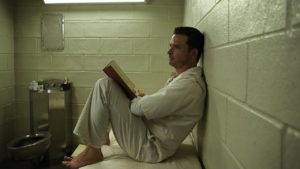 During its four seasons from 2013 to 2016, Rectify was no stranger to critical praise. Nearly a year after the series finale, I think it’s time to mention Ray McKinnon’s series alongside the usual exemplars of television’s “golden age”—shows like The Sopranos, Breaking Bad, Mad Men, and The Wire.

As I watched the series in recent weeks, it occurred to me that Rectify completed its run at just the right moment: In 2017, when it’s so easy for our time to be lost to fear and loathing, no other television show may be so worth our while.

As a teenager, Daniel Holden was convicted and placed on death row in Georgia for the rape and murder of his sixteen-year-old girlfriend, Hanna. New DNA evidence nineteen years later leads to an appeals court decision to vacate the judgment. Rectify begins with Daniel’s controversial release from prison.

The drama of Daniel’s return to his hometown in Paulie, Georgia is set when his first step outside of the prison is met with a horde of reporters. Daniel is dazed enough by the sun, let alone the news cycle’s demands and the renewed interest in whether or not he’s innocent.

The first season spans six episodes and occurs during six days. Time rarely slows down like this in television drama, at least not without requiring relentless slayings from Jack Bauer. Don’t worry: Rectify is also about quieter time.

McKinnon is interested in the conflict between a death row inmate who learned how to live in solitary confinement and the townspeople who are pissed off when he is released. Secrets abound on both sides.

Daniel’s reentry into the world provides drama that runs two ways. The first is that through reading and meditation, Daniel has touched the transcendent through a deep inner life. He is now able to see the world in ways that other people who have been caught up in it cannot. The second is that Daniel arrives at this limited insight with the deep wounds of the prison industrial complex. And if we delve into ourselves too long, we are in danger of losing ourselves.

Daniel sees the world with wide eyes and often sees it well, even while in many ways he is far from being well. His experience of freedom seesaws between exhilarated and utterly overwhelmed. His soft-spoken manner sometimes hides a buried rage that at times he channels against others.

Through slow-motion, sound design, POV shots, and lingering conversation, McKinnon seeks to give us Daniel’s sense of time now that he has returned to the world. Scene time is not reduced to accomplishing the next plot point. We have a main character who does not see himself as the center of all things, but instead sees “the time between the seconds.”

Rectify is about Daniel’s adjustment to freedom; it’s just as often about what Daniel’s presence illuminates in others. The show’s mise-en-scène stages a small town with nowhere to hide. The living spaces, the sites of revealing conversation, confine the characters. Nearly every scene is filmed to remind us: There is more than one way to be imprisoned.

Flannery O’Connor is an important reference point, but I can’t stop thinking about Tobias Wolff’s short story, “Bullet in the Brain.” Daniel mentions in conversation that he memorized the short story while in prison because of how it gave a different sense of time. I suspect that this is the show’s sense of time, too.

Wolff’s story is about a disgruntled literary critic named Anders who finds himself threatened by bank robbers. Anders’s prickly arrogance masks an impotence not just in the moment of the robbery, but in his life as a whole. Anders turns loose his critical tongue on the gunman, who then turns on Anders by shooting him in the head.

This is midway through the story. The second half takes place during that split second when the bullet passes through Anders’s brain. We get a life in microcosm, a trail of what Anders both does and doesn’t remember in this moment.

Wolff uses the rhetorical device known as anaphora (repeated words or phrases at the beginning of clauses) to provide a long list characterizing what Anders does not remember. In short, Anders does not remember the moments that were lost to his anger and resentment. And he does not remember many wonderful moments because those moments succumbed to his displeasure. To find an innocent moment Anders must return to childhood, when his critical imagination still loved the strange world set before him.

In effect, this is Rectify’s drama: Either become enamored with reconciling this imperfect world, or come to loathe it. Rectify shows us both ways. Surely we will experience both. Our question, then, is: How long will be the list of what we won’t remember?

In a strange time when it’s possible to be both distant from and hyper aware of others’ suffering, I understand the desire to settle for more lighthearted viewing—even the decision not to watch television at all. Yet, despite its harsh premise, Rectify is in some sense different from the likes of Breaking Bad and Mad Men. Let me try to name it: Rectify seeks the good, however fragmentary and momentary, in the midst of badness and madness.

This is also why I think a more experienced television critic than me is right when he says that Rectify is “truly Christian art.” When Daniel’s mother says life is too short to tell sad stories, Daniel replies, “That’s exactly why we have to tell them.”

In this humble way, Rectify knows exactly why it’s telling the story. In this life, it’s not fear and loathing but beauty and sorrow that make good company. Together they can’t help but hope: Things will be made right.