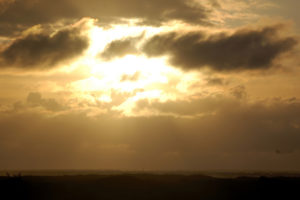 Here’s a brilliantly crafted poem which I love, even though it makes me a bit sea-sick. Bruce Bond’s poem “The Human Share” begins on familiar ground, with a well-known phrase from John’s gospel. But then in line 2, Christ’s salvific work is prefaced by “as if”—and the ground we’re on becomes shaky. “As if” implies that what follows didn’t really happen, but is likened to whatever happened. And since this is a poem with slippery grammar, with no period till the poem’s end, this “as if”—this imagined possibility— might be controlling the entire rest of the poem. Certainly by the close of the first stanza, the poetic imagination takes us to into the unknown: to a range of heavens mirroring earth. But then another marker of tentativeness enters: these heavens’ lakes are “like” a mirror. “Like” is the prepositional form of “as if”—so we have an imagined comparison within a previous imagined comparison. The “slipping” that’s repeated in stanzas 2 and 3 is the perfect verb for the movement of this poem, which slips from image to image. The images are offerings of ways to think of “this solitude we learn to bear”—which is “the human share” of the poem’s title. By the closing stanza, we’re so used to the poem’s slippages that we hardly notice when we’re set afloat on yet another “as if”—which leaves us “ever departing, arriving.” The final play on “it takes our breath away” circles us back dizzyingly to “our death” in line 2 of the poem.

For He so loved the world, goes the book,
as if in dying He died our death, crossing
over, not simply into heaven and back,
but into each particular heaven, the icons

of its lakes so like ours, like a mirror
that drinks the lightened fog of breathing,
so that this solitude we learn to bear
keeps slipping forward, terrified as birth,

slipping the way a record needle slips
holding still, or the lover who leans
with closed eyes, or even as we sleep
the endless voice of a distant ocean,

a shush of waves, how they come to rest
again and again, as if we too were
ever departing, arriving, ever the breath
no friend takes for us, taking it away.

Bruce Bond’s books of poetry include Blind Rain (Louisiana State), Cinder (Etruscan), The Throats of Narcissus (Arkansas), Radiography (BOA), The Anteroom of Paradise (QRL), andIndependence Days(Woodley). He is currently the poetry editor for American Literary Reviewand professor of English at the University of North Texas.

Above image by Colleen Benelli, used with permission under a Creative Commons License.