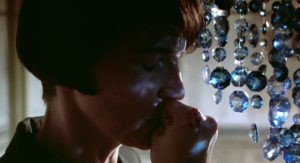 This post, continued from yesterday, appears as the Editorial Statement in Image issue #93 on the art of film guest edited by Gareth Higgins and Scott Teems.

Kieślowski’s Blue is a master class in film form—everything there is to learn about editing and sound design can be found in its first ten minutes—but what lingers longest in the memory is the slow softening of Juliette Binoche’s face over the course of its exquisite hour and a half. Though time and tragedy have rendered her countenance hard as stone, behind the eyes of the woman we see a hurt and helpless little girl. And we can’t help but love her.

I sometimes imagine this is the way God sees us—through the eyes. Despite our strivings for self-sufficiency, our eyes reveal our deepest needs—to love and be loved, just as we are. God responds in kind.

In the eyes of another, we find a soul that knows neither gender nor ethnicity. We find a shared experience, while at the same time we approach an abyss as fathomless as the stars and space that surround us.

We approach the essence of creation.

Because to render the human face in generous light is an act of grace. And to eliminate beauty for the sake of principle is akin to legalism. What is necessary, therefore, is to portray with honesty the experience of life on earth: the good and the bad, the blessing and the curse, the beautiful as well as the ugly.

“Here is the world,” wrote Frederick Buechner. “Beautiful and terrible things will happen. Don’t be afraid.”

Later in this special issue, my friend and fellow guest-editor, Gareth Higgins, will argue (along with over a dozen accomplished writers in our centerpiece symposium) that the purpose of art is to help us live better. And to live better is to deepen our capacity for empathy. True art opens a door onto the experience of the other, and film in particular allows us a vicarious encounter with a broad swath of human emotions, the darkest of which, if we are fortunate, we rarely experience directly.

To better understand the joys and sufferings of our fellow human beings is in every way necessary.

To be fair to Bresson, I admit that I may have misinterpreted his notion of “not beautiful, but necessary” from the beginning. I had always read the mantra as pitting the two against each other, implying that a necessary image could not be a beautiful one, nor vice versa. Perhaps I was wrong.

Beauty is marbled throughout Bresson’s filmography, perhaps nowhere more than in Diary of a Country Priest, which is abundant with striking photography, rendered in haunting black and white by his longtime cinematographer L.H. Burel. (Is it a coincidence, I ask myself, that Diary remains the Bresson film that most captures my attention?)

Perhaps Bresson knew all along how to hold the beautiful and the necessary together. Or maybe he was like me—a work-in-progress who often makes bold declarations, only to see them disproven by the talents of others. Maybe he wrestled with this dichotomy for the duration of his career, or maybe he forgot it as soon as he’d written it. After all, it was just a single idea in a notebook full of them.

And so we come to this special issue of Image.

Our desire in planning it was simple: to gather a handful of the brightest and most interesting filmmakers, writers, and scholars working today and let them talk about whatever moved them.

As we began to discuss the names of folks we hoped would contribute, our wish list could have filled three years’ worth of journals, and that was extremely encouraging. The appetite to watch, contemplate, and discuss the art of film—especially film that seeks to explore faith and mystery—is alive and well in the world. We’re deeply grateful to our contributors, who have brought great heart and elegance to their reflections.

Given the predominance of long-form series in today’s overstuffed small-screen marketplace, however, you may be surprised to find that, aside from a single essay on growing up with network reality shows (a bold and vulnerable piece that caused me to rethink my entire relationship with that much-chastened genre), there is little mention of what we used to call television.

This is no slight to the form; after all, the most success I’ve had in the business has been on the small screen, and I appreciate the depth and nuance that can be mined over the course of a multi-season story.

But I’m a Flannery man at heart, and I love my stories in smaller doses.

I love how films push the boundaries of their form in ways that television rarely even aspires to. For it’s not just the story you tell; it’s the way you tell the story. Small-screen stories almost always devolve over time into people sitting in rooms talking. It’s a writer’s medium, after all, and while it can often be a transformative one, it does not hold a candle to the theatrical experience. To the time inside the temple.

In the end, what’s truly necessary is for audiences to continue watching films in communal environments—whether in magnificent theatrical palaces (for which there is no equal), or ’round the contemporary campfire of the flat screen at home (a diminished but necessary substitute).

As Gareth has said, at a time when the most important question we can ask may be “What is it like to be you?” the light bouncing from a generously lit face to our own watching faces conveys a truth no words could ever replicate. It is a necessary experience, and it needs to be shared.