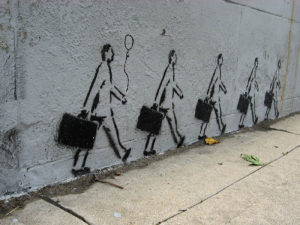 One year ago, I abandoned the nonprofit and academic world to become a freelance copywriter, a man whose goal was to help businesses share their stories with the world. I fancied myself something of an author-consultant, a skilled writer who could chart out the best alignment of speaker, message, and audience.

I told people I was a marketer, or that I wrote webpages, blogs, and email newsletters for businesses. Occasionally, I would tell them I “had my own business.” Which was true, though I had a hard time saying it.

My therapist likes to talk about the stories we tell ourselves, how those stories may lie dormant or operate unconsciously for a long time until some event evokes them, and then we find ourselves reacting to the story rather than the reality.

One of the grander stories for me had been the American Dream (and I’ve written in Good Letters about how I had to get over that one). Another grand story went something like this: Businesspeople are successful either because they know the right people, begin with the kind of money that puts them in the right place at the right time, or are willing to sell their souls for it. I don’t know the right people, have money to begin with, and am not willing to sell my soul. Therefore, I won’t be successful in business.

This wasn’t an explicit lesson from my youth; it was more a fact of our lives. My family never had much money, and we were always at the whims of more powerful business interests.

I’ll admit a part of me saw wealth itself as running counter to my faith. Christians who valued wealth seemed to have magical thinking that ignored their social advantages such as growing up with money and in the right circles, whatever one might think of their souls.

Whatever “liberalization” happened to me in college taught me that the values-forward thinking my conservative upbringing told me to apply to family and politics should also apply to economics, but I could never quite become one of those shadow-Marxist progressive Christians. I didn’t want to base my economic faith on a theory that didn’t take sin seriously.

But you know how these essays work. There’s always some change. You might be leary of where this is going.

I was recently at a business event run by a man of faith who believes God wants us to prosper. He brought in a speaker to tell us about God’s “benefits package” for us—and for our businesses.

It wasn’t “health and wealth.” It certainly wasn’t Marxism. It was a message from a murky territory where faith and capitalism meet on the merriest of terms.

Because I was feeling discouraged about parts of my business, I was attracted to this man’s optimism and faith. He spoke like one of my Vineyard church’s many charismatic pastors, and he shared stories of the Spirit at work such as we often hear in the Vineyard.

At the Vineyard, we also know to be cautious when we are vulnerable. It is both when God can do the most with us, and when we can be most easily led astray.

Eager to believe, but wary of temptation, I heard stories of the Spirit doing things in people’s businesses. The Spirit was connecting them to the right people. It was putting them in the right places at the right times. Sometimes it was restoring their souls so they could rededicate themselves to their vocations.

I had to fight to keep an open mind. These stories were clashing with those other stories, the ones where I am not a person who ever makes money. I had to pray for God to help me discern the truth of what this man spoke.

I found that, by some thoughtful triangulation with other ideas important to me, the specific words he spoke guided me away from the old story more than what he meant by them.

“Business,” he said, “is a vehicle for adding value to the world.” That’s a business-speak way of saying business is creative. In Tolkien’s terms, it is a form of sub-creation, a lesser participation in the activity of God himself. That it is often unjust only means it requires redemption like the rest of our lives.

Then he said something that connected my theology to my desires: “If you do not believe, deep down, that what you are doing is good, you won’t give yourself wholly to it.”

When you’re running your own business, you need all the sustenance you can get, but the spiritual logic of the world requires that you cannot receive life until you have given your own away—yes, even in business.

Business, like religion or love, is one of those words that connotes so many different things to people that it feels unwieldy, a word I still reserve for specific company lest I be misperceived.

Yet am I a businessman. And here, at the beginning of this venture, I know I need to come to terms with the religious meaning of my labor, lest in success I become the very thing I sought to avoid by failure.

Above image by David Drexler, used with permission under a Creative Commons License.