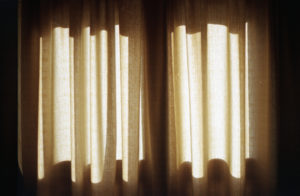 Like the biblical psalms, Nicholas Samaras’s “Psalm as Frustration I Can Live With” speaks for the human condition. And, like many of the biblical psalms, Samaras’s psalm finds the human condition one of being thrust between opposite experiences. “I feel [God’s]presence only to lose it, / lose his presence only to feel it return.” And so it goes throughout the poem: presence becomes absence becomes presence; I see, then don’t see, then see again. But there’s a constant throughout all these changes: “love.” This is the poem’s most frequent verb; “I love” makes five appearances in twelve lines. I read it as the poem’s grounding. Holding together all the swinging between opposites is “love” as the basic baseline, the one solid truth we can count on.

“Psalm as Frustration I Can Live With” by Nicholas Samaras

Nicholas Samaras won the Yale Series of Younger Poets Award for Hands of the Saddlemaker (Yale). His poems have appeared in the New Yorker, New York Times, Paris Review, Poetry, New Republic, and Kenyon Review. He is now working on a manuscript entitled “Psalms, Miktams, and Maskils,” as well as a memoir. He lives in West Nyack, New York.

Above image by apetitu, used with permission under a Creative Commons License.