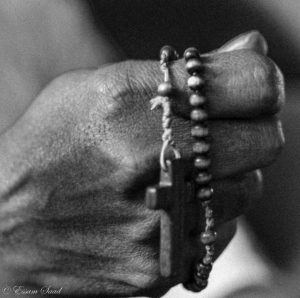 This post originally appeared at “Good Letters” on August 18, 2008.

The birds’ wings shake out the smell of the men who sleep in the park: the smell of meat, sweat, and bread. The birds lift up and fly away as I ride my bike through the park’s courtyard, and in the trees a stone Cardinal sits on a throne, staring down at the ground where the men slept.

Now it is morning and the men line up on the Shrine steps to sleep again, fight, amuse themselves until breakfast in the church basement. The sky above them is white, a clean dome already growling with traffic, construction, and all the sounds of a poor neighborhood being ground down and rebuilt. At the nearby traffic light, fresh streamers of police tape fly up like kiteless lines. The men seem not to notice. They wander like shipwreck survivors with red eyes and salted lungs. They have just stumbled to the sand, washed up with logs and rags and pots, old loot festooned on a beach. They shake off death like a dream.

A few of the men watch me hoist my bike up the Shrine steps and lock it to the gate. I’m late to Mass again. I am not Catholic and I cannot take communion, but almost every morning I run through the garden and up the stairs to the daily chapel, touching two fingers to the holy water. Too fast, today. I throw the door open and the chapel is still. Candles lit, as always, flowers still sagging in their altar vases. But there is something different in the small room, something somber. An elderly neighbor stands at the lectern, the white frost of her balding hair stretched back to a tiny French twist. She does not smile to greet me. Her dark hands are clasped as if in prayer; she unbraids them only to drag the Bible’s red ribbon from yesterday’s readings to today’s. I stop, silent, by the door. The water on my forehead milks down like a tear.

Father Stephen takes the lectern. I sit down in the front row. He gathers up his long cassock sleeves and tells us that there is a body in the church today. It is a little girl, killed late last night, shot in the neighborhood. He closes his eyes and we pray together, then we sing. A few of us are old and come to the table each morning as if to greet death; these ones close their eyes. The rest of us are young; we stare as we sing. Some voices are grainy, others hinged with hard accents. The latter tongues belt out the songs in throaty tones. In the pews of my childhood church, the old voices were like this: axes, wheels, rudders, meant to carve, not carry, old songs. But in the chapel, it is the younger voices that have this strength. I don’t know why. This morning, they wield the strongest word like an awl, boring hard and deep: Hallelujah. They almost seem to shout it, and the old men and women raise their hands.

I wonder where she is: on the altar, in the sacristy, hidden in one of the hallways leading back to the old choir loft. Where does one keep a body? Undoubtedly, she is black; little white girls never die here. The storefront funeral parlors make clear that death is for the remnants of the old neighborhood. The humble, reverent signs and neon doves, the old women easing up the steps on Saturday afternoons, all hats and veils and pocketbooks, arms wound through the elbows of cornrowed grandsons. I had never seen so many funeral homes until moving to this neighborhood, and now, a few years later, they have begun to disappear one-by-one. Will no one die when they are gone?

The sermon, then the Mass. As our row stands, the only shipwrecked man who ever joins us skulks into the chapel, a gray rosary strung in his hands. The door slams behind him. I let him pass in front of me, and then I follow him around the candles and the lectern, down the aisle to the altar table at the other end of the room. He even smells like seawater: salt, sweat, mossy refuse of the world. His feet are black shells stuffed in peeling shoes; his hands are red-ridged starfish. Apart from me, he is the only one who does not partake, and there is some solace in him coming now.

What does he know about this little girl? The men who roam watch everything in the dying neighborhood. Did he see her on the street last night, when she was shot? Does he know that while he slept in the park, her small hands and feet were washed and dressed for the last time? He mutters, bows, as we approach the table, and his voice is like the sounds of the birds in the park. I cross my hands against my chest and think of the girl’s hands folded against her own. If there were ever a morning to break the rule and take the host, it would be now, when death is so close.

We take one step, two steps; the man closes his eyes and draws in a breath. His hands fold flat against his chest. Now the priest is before him and he bows deeply. His hands hesitate like wings fluttering, then he lowers them and the white host comes down. He brings the bread flat-handed to his mouth; he takes the chalice like a child drinking from a cup. He is eager, relieved. He steps away and wipes his mouth on the back of his red hands.

I wade into the scent of his body and stand before the priest. What should I ask? Always, even though the priest knows me and my crossed arms, there is a moment when he holds the host up like a white coin. Gazing at it, his tired eyes look hopeful. Then he sees my posture; he lays the host down in its dish. He cups my head with his hand and blesses me: Father, Son, and Holy Spirit.

I turn away from the chalice and sit down again. The shipwrecked man is standing by the door, his gaze long lost, his tongue licking clean the crevices of his teeth. The others, old and young, are solemn in their worship. All eyes close but mine, and I am alone in their midst, the only body alone. I taste the clean saliva in my mouth and wish for the sour aftertaste of bread, the hot welt of the wine in my throat. I think about the girl, all her senses muted, all quiet as she waits for resurrection. The man turns, stumbles, and batters briefly at the door. His rosary clangs against the brass knob as the door swings open, the roar of the neighborhood sweeps in, and then he is gone.

Above image by Essam Saad, used with permission under a Creative Commons License.