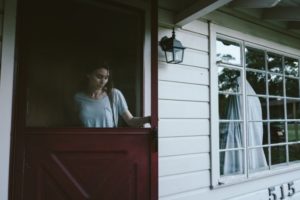 If you want to be reminded of all that overwhelms you, go see David Lowery’s latest film A Ghost Story. I know that sounds like a good reason not to see a movie, but consider it a recommendation. To be human is to be any number of things; one such attribute is that near-cliché, haunted. In Lowery’s ghost tale, don’t expect a conventionally scary haunted house story.

The extent to which this film will get under your skin depends on what you see when you stare into the depths of space and time—into the possibility of cosmic significance. A Ghost Story uses conventional haunted house tropes to reveal a singular, less conventional scare: You’d better learn to make the most of this life, and also prepare to let go of it.

Rooney Mara and Casey Affleck (M and C, respectively—their archetypal characters aren’t given names) play a young, married couple living in a small suburban Texas home. Based on what we know of their lives together, which isn’t much early in the film, C is a struggling musician. They appear to have a disagreement, and they also appear to love one another. Characterization is brief, visual, and unspecific.

A Ghost Story is a film best experienced knowing next to nothing going in, and the details better left unspoiled begin early in the film. (You’ve been warned!).

Near the beginning of A Ghost Story, the unmistakable sound of the couple’s piano startles M and C awake, disrupting the night’s expected silence. They rush into the living room and turn on the lights. Nothing’s there. At least nothing out of the ordinary that the eye can see. Yet, there’s also no immediate explanation for the sound. M and C return to bed.

What follows the bump in the night are three sequences in the first half of the film that I won’t be able to forget. They are memorable for how they are shot—static long-takes—and for how they are interconnected—perhaps best described as a triptych of love, death, and grief.

In the first of these three scenes, M and C lie next to each other after they’ve returned to bed. Half-awake, they whisper inaudible words, they nuzzle noses, and they kiss. As we watch them in close-up from a God’s-eye-view, it’s almost unbearably intimate.

In one of the first masterful cuts of the film, we move from the bedroom to outside the house where we see an almost supernatural mist. It’s unclear how much time has passed. The camera pans slowly until we finally see a totaled car in the middle of the road after an accident.

The second of the three scenes is in the hospital where C’s dead body lies beneath a white sheet. We stare at his still-sheeted form for some unnerving moments. Eventually, C rises, still covered in the white sheet that now becomes his ghostly form. Walking through the hospital unnoticed, C’s ghost encounters a beam of light in the shape of a large door. He stares at it for a moment, as if facing a decision. He turns away, then wanders home.

The third memorable scene—also the most talked about—follows soon after C’s ghost returns home. He witnesses what his wife’s life is like in the aftermath of his death. By now you’ve probably heard about the scene: M, in her grief, consumes an entire pie during a five minute, uninterrupted shot. There is no sound, save for the sounds of her eating, which quickly transfigure into the image and sound of deep sorrow.

The triptych of scenes share some similarities. One is the sense of time they establish. In these scenes, and in much of the movie, we are asked to slow down and embrace silence. We are given room for contemplation. There is also a discomforting intimacy about all three scenes. When we are brought close to the passage of time, we can almost sense that it is fleeting. This is one of the triumphs of the film: Lowery slows down time so we can sense that everything is short-lived. We are forced to sit with this limitation.

It’s not just that C’s ghost can’t let go of the fact that he’s lost his life; it’s that he can’t let go of the particular home in which his life took particular shape. The specific spaces where he was living. Where he was moving. Where he was being. He returns to his wife, even while she doesn’t know he’s there. He sees her grief. He sees her move on. He sees her with another man. He sees her leave. Then he sees another family move in and make the house a home of their own. As his sense of loss increases, C’s ghost becomes angrier. He even begins spooking the family in all the conventional ways.

Accented by the film’s boxy 1:33:1 aspect ratio, C’s ghost is both unstuck to time, yet stuck in a box of nostalgia that he refuses to climb out of. Whether we are witnessing the past, the present, or the future of this particular space (or some combination), it all has the feel of a home movie. Except imagine being able to relegate your existence to inhabiting that home movie from a disembodied, observer’s perspective.

Such is the purgatorial plight of C’s ghost in Lowery’s film. It’s a strange perspective that we inhabit: We both observe C’s ghost as he watches life continue, and we also inhabit a perspective that seems likened to his. Here the moviegoer joins with C’s observing, spectral presence.

We are watching, but also searching—for a way out, for a way to let go. This ghostly purgatory presents us with a conundrum about this life: Even if there is the mercy of a return after death, there may be folly in staying too long.