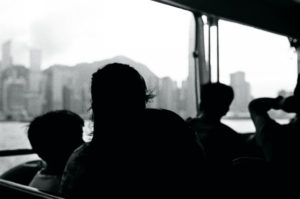 Beside me this morning is a child at the breakfast table vigorously chewing a Fuji apple and explaining to me the mutative abilities of a small vehicle based on the particular placement of a certain Lego brick. Sometimes the vehicle is a plow, sometimes a combine, depending on whether that brick is before it, behind it, or occasionally, totally removed. He is absolutely enthralled by the powers of his own creation, as he sends the vehicle making tracks through a mungy brown field of mixed up Play-Doh.

“What are you doing? Why are you putting on clothes?” he suddenly asks me. I have actually been wearing clothes (not pajamas) for near thirty minutes, but have just now put on and tied my shoes.

“This, my boy, is called getting dressed.” I like to do it every third day, at least. I have showered; I am shod and prepared to leave the house in the event necessity should require it.

I want to make note of the fact that I am happy. I have not done anything piggish or mean in about a week. Last week’s powerlessness and unrest have been replaced by a sense of competence and goodwill, which could be due to a renewed resolution to make good decisions even in small matters, or it could be the result of some strange alchemy in my brain involving serotonin and prolactin.

I have also read this morning that the Spirit of God is sometimes present, and sometimes withdraws so that the receptive soul can realize that when the Spirit is absent, it can do nothing. It cannot be penitent, grateful, or good without the indwelling of the Spirit, which explains my occasionally bereft feeling when my interpersonal skills are less than desirable.

Children, your mother is dealing with infinite and transcendent powers that just happen to have fled her soul at the moment. Go easy on her or she may bite, for her empathic abilities are currently limited.

And likewise, may I be merciful with my children who have not yet begun to detect the divine presence that periodically takes up residence within.

I have lost interest in reading or writing prescriptive articles on Christian living, as though I need only tweak this or that area of my life to be a spiritual success story.

Sometimes, in downplaying worldly success, it’s possible to overemphasize domestic success, spiritual success, marital success. In the big picture, it’s all worldly. Domestic bliss is “of this world” just as existential crisis is.

Some things are just as true as they are mysterious: I want to immerse myself in the truth of Jesus Christ. In him you cannot go wrong, no dwelling in parameters, no rationalization of nonessentials, no perpetual use of self as anecdotal evidence.

One week’s powerlessness can be another week’s progress depending on the Spirit’s placement. But Christ never changes.

Before my husband leaves for work, I have recently begun asking for a hug. A lifelong touch-me-not, somehow it has become essential for me to be wrapped in someone and something bigger than myself. I just want to get to the core of us, where the presence, God-willing, sometimes is.

At the Resurrection Christ told Mary Magdalene, “Stop hanging onto me.” And my husband occasionally follows in the footsteps of the Lord. “How long is this going to take?” he wants to know.

He’s holding a cup of coffee, which I take and set on the counter. At this point I have often not dressed or brushed my teeth. I’m still wearing my glasses, and I can see that this is a great sacrifice for him to be receptive to this outside object interfering with his forward motion. Inertia is the enemy of love.

“Ten seconds,” I say, as he submits, possibly counting inwardly. “It’s good for me. It’s probably good for you too.”

I am recalling the Irish brogue of a priest I once heard talking about men who have forgotten how “to use their strong arms for loving.”

Strength is for loving. And those ten seconds supply me with most of my needs for the day. I recall this sensation, when the little boy with the Lego tractor has been following me around the room. Anywhere I sit down, he sits down too.

“No.” He weasels his feet under my thigh, which feels irritating to me. Toes pinch.

So I put down what I’m holding, whatever it is, and hug him for ten seconds. Unlike some of my other kids, he doesn’t protest. Then he slips to the floor, tractor in hand, and pushes it out of the room.