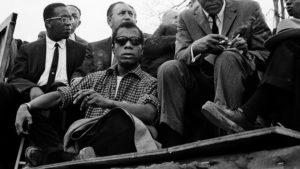 Near the beginning of Raoul Peck’s documentary, I Am Not Your Negro, James Baldwin says that in 1957 he couldn’t stop thinking about a photograph he saw at every newspaper kiosk in Paris. It was of the fifteen-year-old black girl Dorothy Counts, who was surrounded by a white crowd filled with revulsion at the sight of her. Dorothy walked to school in Charlotte, North Carolina in the wake of integration in the south.

Samuel L. Jackson voices Baldwin’s words: “There was unutterable pride, tension, and anger in that girl’s face as she approached the halls of learning with history jeering at her back. It made me furious—it filled me with hatred and pity, and it made me ashamed. Someone of us should have been there with her.”

One of Baldwin’s central preoccupations, like so many black Americans before and since, was why so many white Americans refuse to see injustices occurring in plain sight. I Am Not Your Negro is another attempt to give eyes to see.

When Baldwin saw Dorothy Counts, he knew he was returning to America. He planned to write about black Americans’ “dreadful journey” thus far, represented by the lives of three men: Malcolm X, Martin Luther King Jr., and Medgar Evers. All three men would die before the age of forty, betrayed and murdered by their fellow countrymen.

The book was going to be a memoir called Remember This House. According to Baldwin, the black American feels like a stranger at home. There is no place for you in your own country.

Baldwin died before finishing the book. Peck’s documentary uses Baldwin’s unpublished words to narrate the images, and thus bear witness in the way that Baldwin said was his life’s work. The documentary shows footage both from Baldwin’s time and from ours. Accompanied by Baldwin’s words, we are invited to see how he brought insight to his own time, and also how that insight was prophetic.

A common thread of Baldwin’s thought is that the majority of white Americans resist seeing what is really happening. It makes sense that he devotes so much analysis to comparing popular culture’s depictions of black and white Americans. What he finds in the American (mostly white) social imaginary is a strange irony: The love of violence but also the lust for safety and comfort.

To watch the television for any length of time, Baldwin says, is to “learn some really frightening things about the American sense of reality.” The majority of people are shaped by images “that are designed not to trouble but to reassure. They weaken our ability to deal with the world as it is, ourselves as we are.”

A pivotal moment during the civil rights movement was when forty-eight million American viewers saw fifteen minutes of footage from Selma, Alabama showing Sheriff Jim Clark and a group of Alabama troopers brutalizing black protestors during the planned march across the Edmund Pettus Bridge. White American viewers who were tuning in for the Sunday Night Movie could not ignore the teargas and truncheons and violence that became known as “Bloody Sunday.”

Yet, in the last few years it’s been clear that history remains with us. What in the 1950s was televised news broadcasts of violence against black people is now social media videos of violence against black people. What was once on our television screens is now on our cell phone screens. While historians agree that the images from “Bloody Sunday” were crucial to the passage of the voting rights act later that year, the last few years have reiterated that those images alone did not give the insight necessary for long-term, systematic change.

If there is some hope when it comes to our image-driven culture and the context given to those images, it may be the voice that black artists have in crafting the narrative context and interpretation of our image-driven mythologies.

Whereas Selma was for many white people a decontextualized news clip couched between commercials, Ava DuVernay re-presents Selma onscreen in our own day with its full narrative context. Or consider Kendrick Lamar’s carefully crafted music videos during the rise of Black Lives Matter. In the video for the movement’s anthem “Alright,” a young black man (Lamar) is shot by a police officer but in the end rises back to life.

It occurred to W. E. B. Du Bois that he was shut out “by a vast veil.” Toni Morrison considered it her job to “rip that veil drawn over ‘proceedings too terrible to relate.’” If this veil has also long covered the eyes of white Americans, then sometimes you have to startle people. This is a good frame of reference for Jordan Peele’s film, Get Out. Peele uses horror tropes to rip away the veil. Long lulled into apathy by a desire for safety and comfort, white Americans are met with images that truly trouble.

Yet, videos of murdered black Americans are less often accompanied by context that might illuminate the pervasive conditions of racially motivated animus that has beset our country since its beginning. The videos are more often seen between your Aunt’s Candy Crush score and an advertisement targeted to your browser’s search history.

These images just as easily become lost in a sea of consumerism which, at its worst, inclines us to treat persons as things.

Ralph Ellison’s invisible man goes underground because of others’ refusal to see him. He says, “That invisibility to which I refer occurs because of the peculiar disposition of the eyes of those with whom I come in contact. A matter of the construction of their inner eyes, those eyes with which they look through their physical eyes upon reality.”

In I Am Not Your Negro, Baldwin is seen, and what he witnesses is made visible for all to see. The long-standing question is whether we will have the inner eyes to see it, then be moved to action. Baldwin saw well. When will we?