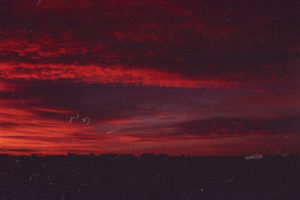 We’ve all suffered wounds in some way. If not the physical wounds of war or other violence, then the psychic wounds of broken relationships. We struggle against the evil both within ourselves and outside in the world. Richard Osler’s new poetry collection, Hyaena Season, fearlessly probes all these wounds, all this evil.

Let’s take the title poem in full, with its epigraph “For the Bushmen it [the hyaena] was the most clearly accredited representative of the power of darkness and the principality of evil. —Laurens van der Post

When my daughter was four I read her the story about Hyaena.
How, out of jealousy, she tried to murder Lynx, wife of Dawn’s Heart,
the morning star. How, when Dawn’s Heart saw his Lynx, poisoned
and dying, he threw down his spear like cold lightning and struck close
to where Hyaena hid and where, discovered and panicked,
Hyaena ran through a cooking fire, searing her feet on the burning coals.
After this Hyaena and all her descendants walked with a limp.
When I finished the story, Lynx safe at home with Dawn’s Heart,
I would say my daughter’s prayers, kiss her and tuck her in.

The hyaena’s broken gait. Call it a limp. Call it a sign. The one
who hunts in darkness. Death’s ungainly rhythms. What I saw in Kenya
when my daughter was twelve. In the hyaena’s mouth, the newborn gazelle.
The mother, fearless in her grief-struck madness, charging and helpless
to change the sounds of new bones in that mouth, breaking.

When my daughter was nineteen I told her the story of the murdered man
and she laughed nervously, admitted how naive it made her feel.
I didn’t say hers was the proper naivety of the white pine, the paper birch,
the new-day yellow of the Allamanda. I didn’t say I was glad of her innocence:
how she couldn’t imagine how they murdered him with a heroin overdose,
then, how the killers carried him, washed him,
put the thing he’d become in pajamas,

tucked him into bed.

The poem’s three stanzas each tell stories of evil: in myth, then in the natural world, then in humankind. And many of the poem’s images recur in other poems of this collection.

“The hyaena’s broken gait. Call it a limp…a sign…the sounds of new bones in that mouth, breaking.” Those bones breaking: in the poem “Twibuke,” on Osler’s re-visiting Africa years after the Rwandan genocide, he is taken to:

the bone room, coffins
racked on each side, packed with bones
skull, femur, rib, vertebrae, tibia, fibula—
rhizomes outside their season. Bone
quiet. No echo of village voices. Nothing.

Brokenness, woundedness is again the theme of a series of poems on the break-up of his marriage of twenty-five years:

“No.” the weight of a word. The way it locks fluid insistencies.
What it hardens. “I never loved you.” Words, their erosions,
gathered like loess, pressed into love’s hardest layer.
—“A Geologist Recites Stratigraphies: The Way of a Marriage”

Obsidian — little deaths — the refusals
a woman can cut into a man.
—“Obsidian”

Going back to “Hyaena Season,” I’m aware of how the pure evil of the final stanza’s murder recurs through much of the book. There’s a friend’s rape in “Arrested”:

…a man sprawled over her, her books scattered,
pale pages open like square moons, her face turned up, the cut
forehead, her clothes like ripped skin, hanging.

And there’s “Strange Batons,” one of the many poems evoking the evils of the Rwandan genocide, where most people were killed by machete:

The killer remembers how
odd it was. The way
most of them died,
quietly, no cries or pleas.
The man mentions this
with a sense of regret.
He doesn’t mention
sounds the blades made—
strange batons
conducting a music mad
with this breaking apart:

Clearly Osler’s Hyaena Season is not a light read. It deliberately pulls us into life’s dark side. So when positive moments come, they are well earned, and feel more astoundingly bright and true because they’ve emerged from darkness.

Even within the title poem, the poet’s tender relation to his daughter over the years of her childhood offers an invisible positive thread. In fact, at the heart of the poem is the contrast between his tender “tucking her in” and the murderers’ “tucking [their victim] into bed.”

Another whole poem is devoted to his love for her: “Lost Inside Henry VIII’s Chapel,” which recounts his finding her, at age six, in the chapel praying on her knees…

…already old enough to have asked
“who invented meanness?”…

But now all I know is how my heart beats outside of itself,
how my knees give way
with practiced discipline, when I drop
into place beside you.

Unexpected brightness also closes the book’s final poem, “Adaptation,” on his efforts after his mother’s stroke to communicate with her. Throughout most of the poem, he feels as if a door inside her has locked him out. He struggles to decode what she says: she points to Easter Lilies in her room and says “Daffodils.” She says “I can’t believe it, four…” and he tries to guess “Four what?” She shakes her head “no” with every guess, until at last, an opening:

he asks, “You can’t believe it’s been four years
since Dad died?” a key
clicks in a lock,

—————a door opens,
an Easter Lily flowers inside him.

Richard Osler knows darkness well. But he also knows the light when it blesses him.