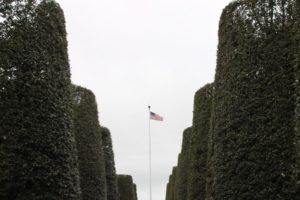 Recently I gave a talk to the freshman at a local college on the theme of negating hate. Their common reading this year was All Quiet on the Western Front, Erich Maria Remarque’s novel set in World War I.

The protagonist is a young soldier named Paul Baumer. A German. Our enemy in that war.

To negate hate, the idea is, you have to get to know your enemy, see him as a human being. Turn the enemy into the neighbor—or better yet, the brother.

I have some personal understanding of how this can work.

In February of 1991, I found myself sitting in a bunker under the sands of Iraq, looking through the photographs and letters of a soldier who lay stiff with rigor mortis above me, twenty feet from his severed arm. Looking at his personal belongings, I came to see the Iraqi as just a young man, like me in more essential ways than he was not.

I felt grief for him, and I felt shame for my part in his death.

In a powerful scene in All Quiet on the Western Front, Paul looks at his enemies, Russian prisoners, and thinks how things would be different “if I could know more of them, what their names are, how they live, what they are waiting for, what their burdens are….” He concludes, “A word of command has made these silent figures our enemies; a word of command might transform them into our friends.”

In another scene, pinned down in a foxhole with an enemy soldier he has stabbed, he waits for the man to die, unable to bring himself to finish the job. The man’s lungs gurgle as Paul waits to make his break. When the man finally dies, Paul addresses him:

But now, for the first time, I see you are a man like me. I thought of your hand-grenades, of your bayonet, of your rifle; now I see your wife, and your face and our fellowship.… Why do they never tell us that you are poor devils like us, that your mothers are just as anxious as ours, and that we have the same fear of dying and the same agony—forgive me, comrade; how could you be my enemy? If we threw away these rifles and this uniform you could be my brother…

During the famous Christmas Truce of 1914, German and British troops did act as brothers. They laid down their weapons and celebrated Christmas together in the no man’s land between them. The trench lines were so close in places that the soldiers could converse with one another during hostilities, while they were supposed to be killing one another. A British soldier named Murdoch Wood later said of that time, “If we had been left to ourselves there would never have been another shot fired.”

Recoiling from the murder of another human is the first natural reaction to combat. It is every bit as strong as the desire to stay alive.

We see the great Pandava warrior Arjuna having just such a crisis in the Bhagavad Gita, we find him riding in his chariot in the no man’s land between sides. He sees people he recognizes over there, members of his extended family. He cries out, “It is not good, O Keshav! nought of good / Can spring from mutual slaughter!”

In Stephen Crane’s Civil War novel, Red Badge of Courage, the protagonist Henry Fleming muses at one point that if he and the Confederate soldier he was obliged to kill had met under different circumstances they likely would have been friends.

If only it were so simple. While Murdoch Wood might have thought enemies in shared suffering could work things out and become friends, another soldier reportedly disagreed, and said of fraternization with the enemy, “Such a thing should not happen in wartime. Have you no German sense of honor?”

He was just a Corporal with the 16th Bavarians during WWI. His name was Adolph Hitler.

It is not hard for me to see how two low-ranking enemies who share the suffering of war come to agree that they have more in common with one another than with either of their superiors. But I see these men marching with their Tiki torches and my heart fills with hatred.

I wrapped up my freshman talk by telling the students that the easiest way to change the other—in this case, members of different races right here in the United States—into a friend is to reach out, make the effort to know them.

But my own advice comes up short for me when I think of the white supremacists experiencing a troubling renaissance. I grew up among them in a small West Virginia town. I know them all too well, and am the more disgusted for it.

How do you reach out to someone who is actively trying to deny other human beings their full humanity? How do you love the enemy who is your neighbor, return evil with good when he is carrying a torch down your street, espousing views that are not only reprehensible, but that actually incite some to horrendous violence?

How can I negate this hate? I really am asking. I cannot manage it.