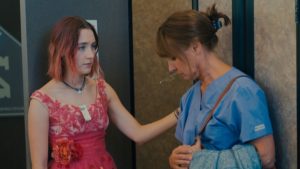 Lady Bird finds its rhythm by the quick wit of its characters’ banter and succeeds especially because of its excellent performances. Director Greta Gerwig adds to characterization as she frames and arranges their relationships.

Lady Bird and her mother have a memorable argument at the thrift store, and it’s as if they are nearly submerged in a clothing rack; at a high school party, we first see Kyle (Lady Bird’s boyfriend), alone, in a wide-angle shot by the pool; for what seems like several minutes Lady Bird’s father refuses to face a heated argument, and we’re shown just enough of solitaire on his computer screen.

Gerwig regularly enhances dialogue by locating characters with one another and their environment in a way that emphasizes their interior states. These staged interior states can either be in concert, or contrast, with what’s being said, but either way they’re revealing. As it’s been said, what is inside is also outside.

Gerwig’s first effort is unmistakably a Jon Brion film. I mean this sonically, but it’s not simply that Brion’s compositions are characteristically his, though they are, and able to summon a longing you didn’t know was dormant. This film feels of a kin with Eternal Sunshine of the Spotless Mind (which I mentioned in the beginning of Part 1 yesterday) in more ways than soundtrack. We have a lead character who longs to forget about home.

Eternal Sunshine finds its pace in people trying to resist the memory erasing. Lady Bird achieves something of the same frenetic pace. Here, though, it’s that of a teenager whose childhood is fast fading, and she’s trying to catch up with what it all means. (Gerwig told cinematographer Sam Levy she wanted the film to “feel like a memory.”).

It’s only when Lady Bird has sex with cool kid Kyle that she realizes how easy it is for us to deceive ourselves and others with “a whole experience that was wrong.”

In order to receive the sort of attention from Lady Bird that he wanted, Kyle made her believe that he was also a virgin. After they have sex, he tells her he’s had sex with at least six other people. He even seems to believe his own version of what happened (as 9/11 coverage continues in the background on the television in his room).

Gerwig handles the aftermath of this revelation with special care. Lady Bird slowly descends the stairs. We get a brief shot of Kyle’s father: asleep in the chair, unaware of anything going on. Outside, though, Lady Bird’s mother is waiting to pick her up, and she’s available to console her daughter as she begins to sob into her shoulder.

She takes Lady Bird to do one of their favorite things together: Tour model homes that they can only dream of inhabiting together. They imagine living a life that isn’t theirs, but it’s in the context of a mother being attentive to her hurting daughter, of being true and longing for something better.

Near the end of the film (spoilers ahead!), when Lady Bird is at college in New York, she asks a boy if he believes in God. He says belief in God is ridiculous.

“People call each other by the names that their parents gave them, but they won’t believe in God!” she says.

When he asks Lady Bird her name, she says it’s Christine.

Gerwig’s directorial debut is also impressive for how Dardenne-esque it is in resisting the obvious or easy concluding scene. In the hands of a lesser director, this film might have ended with Lady Bird’s POV shot from the window seat as her plane ascends from Sacramento.

Likewise, a lesser film might have made Lady Bird’s decision to adopt her given name a simple triumph. Instead, Christine goes on to claim she’s from San Francisco and gets emergency room-drunk.

The next morning, after she realizes it’s Sunday, Christine walks to a nearby Catholic Church, and we get another shot of her ascending. This time Gerwig is attentive to her flight up the stairs of the church and frames the shot to place Christine in relationship to the choir. Christine cries.

The film takes place in Sacramento because Gerwig grew up there, and it may be an unintended connection that the city is named after the river deriving its name from Most Holy Sacrament. Even so, it’s a happy accident. The ascension motif has a sacramental quality, a view of life that denotes partaking of a heavenly reality in our midst.

The most Brion-infused moments form a collective memory for Christine and her mother about what it’s like to drive around and live in Sacramento. The time spent paying attention transforms Sacramento into a place that they can regard as home, a place that is truly theirs. Even in New York Christine will not leave Sacramento.

It’s fundamentally human to play roles and often these roles—these identity markers—are defined by our relationship to others. We are free to accept or reject who we are; this is the art of personhood. We are able to make something of ourselves in responding freely to the world.

As Robert Spaemann warns, though, be careful: “We cannot make a clean break between the way we construct ourselves and the way we really are.”

The question isn’t whether or not we will play a role, adopt an image, or become counterparts to others. Rather, the question is: Where do we find ourselves, and will we be true?

I suspect we can find our true selves in Sacramento, yes, but also in New York, or anywhere. The horizon of being true is formed where time and eternity meet, where we clothe ourselves with the wisdom passed down by generations of those who’ve come of age with love and attention.