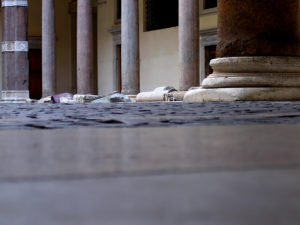 Anyone blessed enough to receive a good classical education is somewhere along the way warned that he must not oversimplify—must not reduce everything to allegory or elevate it to archetype. The world is a complicated place, after all, and there are usually multiple causes and manifold effects. Phenomena do not fit forms so neatly.

Nevertheless, the patterns and characteristics that have been discerned over the ages provide the basis of recognition, the building blocks of understanding. Without them, we would be left in a world without wheels, constantly reinventing what we could have had a blueprint for all along.

So while it is not perhaps the whole story behind Paul Thomas Anderson’s latest film Phantom Thread, the myth of Cupid and Psyche, from Apuleius’s Golden Ass, is a trusty referent when looking to understand this complex and beautifully-rendered work for the screen. The union of soul/spirit (Psyche) and love/desire (Cupid—or properly stated, Eros, in keeping Greek with Greek) has been a staple dichotomy of not only artists but also psychologists, philosophers, and theologians for as long as the ideational has been conceived as separate from the material.

To summarize what it is a sin to summarize, in the old tale, the beautiful human Psyche draws upon herself the wrath of a jealous Venus, goddess of beauty, whose tribute is being paid to Psyche rather than to her. So Venus commissions her son, Cupid, god of love, to work her revenge upon Psyche. Instead, he falls in love with the girl, and once she’s spirited away to a magical realm, visits her in a dark disguise and makes her his wife.

In time, Psyche, curious as to the identity of her husband, brings a lamp to their evening bed, but is so startled by his beauty and by her fledgling desire that she spills oil upon him. Burned, he wakes and flees. The forlorn Psyche then undergoes a series of trials and tests set out by Venus, who keeps her wounded son in her castle; but Psyche passes them all, Cupid escapes and returns, and all is well as Psyche is granted immortality and rules in union with her husband.

Obviously, the old body-soul tension and unification archetype are at play here, a standard for the Platonists and Neo-Platonists and Aristotelians and Thomists, etc. Freud had his fun with the drama as well: how could he resist the mother-fixation and the disjunction between the spiritual and the carnal? If the res is not made one with the verba, you’ve got no being for the philosophers to enjoy and no hypostatic union for the theologians to worship; in short, if the ghost doesn’t fall in love with the machine, bad things happen (pace, Descartes).

Consciously or unconsciously, Anderson, who is one of the modern masters of high art storytelling (and upon whom I’ve commented in an Image essay from a few years back: “Ordered Chaos: Three Films by Paul Thomas Anderson” (issue 27), has made a movie that transports the themes of the old myth to the world of fashion in its great heyday, the 1950s.

Reynolds Woodcock (played by Daniel Day-Lewis, in what he says is his last film) is a London couturier of the first rank. But he carries within his psychological entourage memories of a dead mother, whose wedding dress for her second marriage he feverishly sewed himself as a boy; a fussiness about routine, detail, and freedom from distraction that he carries to a manic level (he even finds too much “motion” at breakfast an unbearable affront); and a dragon of a spinster sister who both shields him from a harsh world while at the same time obliging his worst conduct in it.

Into this most feminine of environments, in which Woodcock is a curious genius, enters someone who he is amazed to find captivating, a beautiful waitress named Alma (the mesmerizing Vicki Krieps). She is as taken with him as he is with her, and as she finds her way into his confidence and becomes his model and muse, she comes to learn of his obsessions and superstitions.

He relates the myriad of spells and curses that are said to hover around the process of dressmaking, particularly wedding dress making, and how he dispels them by sewing into the linings little talismans to ward off the spectral world.

Despite Alma’s devotion to Woodcock, as his lover and champion, the unpredictable powers that have made him into the virtuoso that he is—the dangerous brew in his mind of mother-love and fear and insulation that bubbles into a monstrous but productive focus—repeatedly threaten to tip him over into tantrums that would destroy their union. His sister tells Alma that Woodcock feels doomed and cursed by love.

Alma’s tests, her attempts to win him back from the brink, provide the conflict in the film. The extreme measures that she takes to break the spell of what makes Woodcock a genius before it destroys him as a man testify to many things: the strange quality of brilliance that at the height of its realization always teeters on the precipice of ruin; the peculiar antidote that works to save geniuses from themselves; and the supreme sacrifice that such a volatile blending seems to require. When asked what Woodcock has received in return for fulfilling all of Alma’s dreams, she replies: “He has received every piece of me.”

But most of all the film acts as a reaffirmation of the archetypal truth that raw passion, untempered by the firm but gentle hand of reason, cannot alone bring about all that it is capable of—the carefully-made creation of great and timeless beauties, none so fine that they cannot be touched, nor any so common that they cannot be believed in.