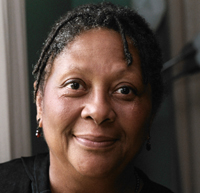 The daughter of a Tuskegee Airman and a teacher, Marilyn Nelson was brought up primarily on military bases and started writing while still in elementary school. She earned her BA from the University of California, Davis, and holds postgraduate degrees from the University of Pennsylvania (MA, 1970) and the University of Minnesota (PhD, 1979). Her long teaching career included positions at Saint Olaf College and the Universities of Connecticut and Delaware, and brief stints at the US Military Academy at West Point, in Denmark, in Germany, and in France.

Fortune’s Bones: The Manumission Requiem was a Coretta Scott King Honor Book and won the Lion and the Unicorn Award for Excellence in North American Poetry. A Wreath for Emmett Till won the Boston Globe/Horn Book Award and was a Coretta Scott King Honor Book, a Michael L. Printz Honor Book, and a Lee Bennett Hopkins Poetry Award Honor Book. The Cachoeira Tales and Other Poems won the L.E. Phillabaum Award and was a finalist for the Los Angeles Times Book Award.

Her honors include two NEA creative writing fellowships, a Connecticut Arts Award, a Fulbright Teaching Fellowship, a Guggenheim fellowship, three honorary doctorates, and the Commander’s Award for Public Service from the Department of the Army. Nelson is founder and director of Soul Mountain Retreat, a small writers’ colony, and was Poet Laureate of Connecticut from 2001 to 2006.

She was interviewed for Image issue #69 by Jeanne Murray Walker.

Image: How early did you know you wanted to be a writer?

Marilyn Nelson: It was a toss-up between being a poet and being a doctor from about age twelve to about eighteen, when I realized that probably not everybody in my Zoology 1-A class was making up quatrains about meiosis and mitosis to study for the midterm.

Image: Which poets did you read early in your life?

MN: The ones who most influenced my early writing were African American poets who showed me it was possible “to make a poet black, and bid him [sic] sing,” as Countee Cullen wrote. I read Paul Laurence Dunbar, James Weldon Johnson, Langston Hughes. Gwendolyn Brooks broke through the glass ceiling by winning the Pulitzer Prize when I was a child: for years I dreamed that she would discover me.

Working in the university library during my college years, I discovered, devoured, and discarded many poets. Some I remember: Theodore Roethke, Conrad Aiken, LeRoi Jones, Edna St. Vincent Millay. And of course, as an English major, I was reading classics in classes.

Image: I’ve read that one of your first jobs was in Lutheran Campus Ministry. What did that job involve and how did it serve as a portal to the rest of your life?

MN: When I dropped out of the PhD program at Penn, I went to the national Lutheran Church office on Queens Lane in Philadelphia to ask if there was some job I could apply for. It was 1969. I had decided to drop out of what seemed to me to be a completely irrelevant academic program in order to do something more relevant to the upheavals then taking place in the country. I thought one way I could contribute to positive change in American society was to move it from within, and working in the church seemed to be a way to do that.

I became the junior associate of a Lutheran pastor, Reverend Lee Snook, at Cornell University. I loved the job; I really felt I was doing something meaningful. My job involved hanging out and talking with Lee, a brilliant man who was at that time finishing a doctorate in divinity (he later left parish ministry to teach systematics at Luther Seminary) and his wonderful wife, Lois, and getting to know his colleagues in a big stone building on campus, Cornell United Religious Work. I was twenty-four. Everyone else in the building was older, male, white, and clergy of some denomination or another. Father Daniel Berrigan was one of them….

And I ran, with a group of students, a coffeehouse called the Unmuzzled Ox, in the basement of the building I lived in. I ran a call-me-anytime emergency suicide hotline. I counseled guys about how to meet girls. I drove people to DC to march. And I marched on campus. I led a Bible study group at the church. I taught a course on black theology for the church adult education program. I took part in Luther League retreats. I organized a benefit for Biafra….

During that year I got to know people who led to other things that happened to me. For instance, because people in the national Lutheran Church offices in Philadelphia knew I wrote poems, I was invited to serve on the hymn text committee of a new Lutheran hymnal. We revised every text in the hymnal, trying to remove all traces of racism, sexism, and militarism. (We threw up our hands in despair at “Onward, Christian Soldiers.”) One of the other committee members was the head of the English department at Saint Olaf College, a Lutheran college in Minnesota. When, several years later, there was an opening for an Americanist in that department, he invited me to apply. I spent five years teaching at Saint Olaf.

As Robert Frost says, “way leads on to way.” But every day is a portal to the rest of your life.

This interview is excerpted from Image issue #69. To be continued tomorrow.

Jeanne Murray Walker’s most recent books are Helping the Morning: New and Selected Poetry(Word Farm) and The Geography of Memory: A Pilgrimage through Alzheimer’s (Hachette). She is a professor of English at the University of Delaware and teaches in the Seattle Pacific University MFA Program. Her website is www.JeanneMurrayWalker.com.