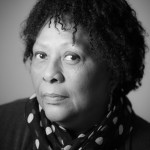 Marilyn Nelson is the author or translator of twelve books and three chapbooks. Her honors include two NEA creative writing fellowships, the 1990 Connecticut Arts Award, an A.C.L.S. Contemplative Practices Fellowship, a Fulbright Teaching Fellowship, a fellowship from the J.S. Guggenheim Memorial Foundation, three honorary doctorates, and the Commander’s Award for Public Service from the Department of the Army. Nelson is a professor emeritus of English at the University of Connecticut; founder and director of Soul Mountain Retreat, a small writers’ colony; and she was Poet Laureate of the State of Connecticut from 2001-2006.

She was interviewed for Image issue #69 by Jeanne Murray Walker.

Image: You have written very moving poems about your own life and experiences, but recently you have been writing about the lives of others, about George Washington Carver, about Venture Smith, about an integrated all-girl swing band that toured in the forties. And you have written a lovely and amazing long poem about a set of twins who were joined and lived that way for over sixty years. How are the processes and rewards of writing poetry different for these two very different kinds of writing—writing about yourself and writing about others?

MN: I’m not particularly interested in writing about my life. I’m one of the lucky ones, with too happy a life for poetry…. So I started writing about history. There are some wonderful stories out there, waiting to be told. How are the processes different? Well, for one thing, I can lose myself in research. I can be fascinated by discovery. The rewards? Well, I don’t lie awake wondering whether someone I love will feel their privacy has been invaded and their trust betrayed through my poems. And I don’t spend a lot of time thinking about and justifying myself.

Image: You often write in form, and some of the forms you use are very challenging—such as the heroic crown of sonnets you wrote about Emmett Till, the teenager who was lynched in Mississippi in 1955. Where did you learn the poetry toolkit—the traditional forms of poetry and strategies for working
in form?

MN: I learned by reading, and by practicing, by getting inside of poems I love and taking them apart to understand how they work.

Image: Why did you choose the very difficult and intricate heroic double crown of sonnets to write about Emmett Till?

MN: I wanted to write something that would blow people’s minds, so the poem’s affect would not rely entirely on the horror of its subject.

Image: Some of your recent poems have been published as books for children. How did you start writing for children and how does that process differ from writing for adults?

MN: For the most part I have been writing ordinary poems, which are published as young adult books. They’re not written for children; they are just poems. I write what I write and it’s published and marketed for the young adult audience. I’ve published several books this way: Carver: A Life in Poems; Fortune’s Bones; A Wreath for Emmett Till; Miss Crandall’s School for Young Ladies and Little Misses of Color (with Elizabeth Alexander); The Freedom Business.

This first started when I encountered an old friend, Stephen Roxburgh, whom I had lost contact with for several years. When we met again, Stephen had started an independent publishing company, Front Street Books, which published books for children and young adults. I was half finished with a collection of poems about George Washington Carver, which I was writing for adults. We started talking, and Stephen wound up publishing it.

Then Stephen heard me read a sequence of poems which had been commissioned to be the lyrics of a cantata called The Manumission Requiem. He decided it, too, could be a book for young adults. He changed the title to Fortune’s Bones. Because of the success of those early books, other young adult publishers started coming to me with ideas. I haven’t changed my writing process: I just write the poems I would write anyway, and the publishers pretty much take them or leave them.

Image: Are you conscious of teaching children history, of passing down a record of the past?

MN: Yes, of course. I started writing lyric histories in writing about my family as an homage to my mother in a book called The Homeplace.

I see I’ve swerved a bit away from your question. I guess what I’m saying is that I am conscious of teaching people history.

The poem about the conjoined twins that you referred to earlier was written because I heard them mentioned during a program about the Reconstruction period holdings of the National Archives. That brief mention piqued my interest enough to make me set aside some time to do research about them.

There are so many interesting stories. I’m sorry I can’t write about all of them.

Jeanne Murray Walker’s most recent books are Helping the Morning: New and Selected Poetry(Word Farm) and The Geography of Memory: A Pilgrimage through Alzheimer’s (Hachette). She is a professor of English at the University of Delaware and teaches in the Seattle Pacific University MFA Program. Her website is www.JeanneMurrayWalker.com.