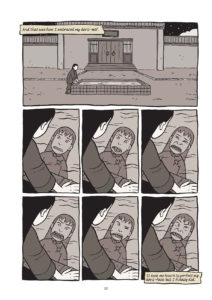 Gene Luen Yang is the MacArthur genius grant–winning author of graphic novels including Boxers and Saints and American Born Chinese. He also writes graphic novels for kids (the Secret Coders series) and for major comic book publishers (Avatar, The New Super-Man). He is profiled in Image issue #95.

Image: In Boxers and Saints, the two central characters are wonderful because they’re flawed—their flaws are part of what make them so interesting to read about. Do you think it’s hard to make an entirely good character interesting or likeable? Do you consciously avoid writing heroes who are too good?

Gene Luen Yang: First, thanks so much for reading my books and taking the time to have this exchange with me.

I get what you’re asking, though. American comic books started off with idealized hero after idealized hero. Superman’s the classic example. He always does the right thing, right? And in those early issues, at least, he never even gets tempted to do the wrong thing. It’s almost a tautology. Whatever Superman does is right, and whatever is right is what Superman does.

I don’t think flawless characters work for a modern audience. We are more cynical, in part because we have more information. When someone is presented as a moral paragon, we hold our collective breath and wait for the mask to fall. Sooner or later, social media is going to expose their clay feet. We only believe in a person’s heroism if we’re shown their flaws up front, so we can be confident there won’t be any surprises down the line.

I’m not sure if that’s a good thing or a bad thing. I guess I’d lean towards good. Truth is truth, right? And it seems to me that flaws and real, bones-deep goodness aren’t mutually exclusive. Grace is often expressed through brokenness.

Image: Boxers and Saints beautifully illustrates the complicated and ambivalent legacy of Christian missionary work in China—we see the full horror but also the full humanity of all the participants. How did you hear that history described in your own family and community? Did your feelings about that history change as you wrote the books?

GLY: Catholicism in my family does not date back to the Boxer Rebellion. My mother converted after she came to the United States in the late 1960s. She spent a part of her childhood in Hong Kong, where the Catholic schools were the cheapest. Her family was going through a difficult time financially, so that’s where she was sent.

She told me that after she came to America, walking into a Catholic church felt like going home, so she signed up for RCIA and began the process of joining the church.

I grew up in a Chinese Catholic community, and there were a few families where Catholicism went back to the time of the Boxer Rebellion and even before. As a kid, I thought Chinese culture and Catholicism went hand-in-hand. Whenever folks around me were talking about Jesus and God and prayer, they were doing it in Chinese.

There were hints of tension, though. There are actually two Catholic churches in China: an “underground” church that pledges fidelity to Rome and a “patriotic” church that’s approved by the state. We had an American priest who had spent his entire vocation working with Chinese people, and he was willing to maintain a connection with the patriotic church.

We also had a few Chinese Jesuits who had each spent a couple of decades in re-education camps because of their faith. They saw any contact with the patriotic church as a betrayal. I held all these priests in the highest regard. I believed, and still believe, that they were all good men. But I do remember overhearing whispered conversations among adults about their disagreements with each other—and these were not polite disagreements. They were intense, vehement disagreements.

I didn’t really get to know the history of Christian missionaries in China until I began researching for Boxers and Saints. There are some great books out there, but my favorite was The Origins of the Boxer Uprising by Joseph Esherick. I loved that book, though I was disappointed by one oversight.

The author analyzes why many Chinese converted to Christianity around the turn of the century. He talks a lot about the political and cultural factors. For instance, some converts, like a few of my characters in Boxers and Saints, were criminals who wanted to escape the Chinese justice system.

The author never gets into the spiritual factors, though. At least some of the conversions must have been responses to experiences of the numinous, right? I’m not a historian and I haven’t done any research on this. Really, all I have are stories that floated around my home church community.

And, of course, we can debate what a numinous experience actually is, what’s really happening in the brain, but when you are talking about Christianity among non-European people, portraying all converts as victims of brutality is as bad as denying that the missionaries were sometimes incredibly brutal. Both absolutes deny humanity. Non-western people can have profound, life-changing experiences within western religious settings.

I was trying to get at both sides in Boxers and Saints. That’s why there are two volumes.

This post is a web exclusive feature accompanying Image issue #95. To be continued tomorrow.