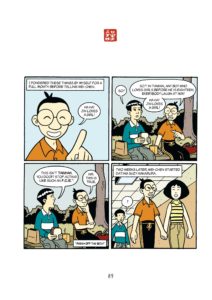 Gene Luen Yang is the MacArthur genius grant–winning author of graphic novels including Boxers and Saints and American Born Chinese. He also writes graphic novels for kids (the Secret Coders series) and for major comic book publishers (Avatar, The New Super-Man). He is profiled in Image issue #95.

Image: Your books have a strong thread of very fraught family relationships—rivalry, loyalty, disappointment—and I wondered where that comes from. Did you read the Bible a lot as a kid?

Gene Luen Yang: My mom bought me a kids’ Bible at our local grocery store when I was in second grade. It was printed on cheap newsprint, but there were pictures on every other page and it was full of stories that intrigued and confused me. I read it cover to cover.

That might be where all the fraught family relationships in my books are from. I’m not sure. They might also be from my own life experience. Family is hard. Human relationships are hard.

After I received an “adult” Bible for confirmation, my mom donated my kids’ Bible. I was so sad. For years, that adult Bible sat on my shelf unread. I didn’t pick it up until I was in college.

Image: You are a Catholic who writes novels. Do you see yourself as part of the tradition of Catholic prose novelists? I’m thinking of Graham Greene and Shusaku Endo in particular because some of their subject matter overlaps with yours, but also because of the way you write these flawed people who occasionally get to be instruments of grace. Or, what other writers have influenced you?

I haven’t read any of Graham Greene’s work. People keep telling me to read him but I haven’t yet. (I know, I know. Bad Catholic.) Shusaku Endo, however, has had a profound effect on me. Silence might be my favorite novel of all time. It was definitely in the back of my mind as I was working on Boxers and Saints.

I haven’t read as much Flannery O’Connor as I should, but my brain goes back to “A Good Man Is Hard to Find” again and again, like there’s some secret in there I’m on the edge of figuring out. I mean, there is, right?

Henri Nouwen is another writer who has had a strong influence on me. One of my college roommates loved Nouwen and some of that love bled into me. I haven’t read In The Name of Jesus in a couple decades, but those ideas are still in there.

Have you read Feathers by Jacqueline Woodson? That. Book. I don’t know if Jackie (we’re friends, so I get to call her that—just sayin’) would describe it as a book about faith, but that’s how I read it.

And you’re right. That same theme of grace through brokenness surfaces over and over. I find a lot of hope in that idea.

Image: A decade ago you wrote American-Born Chinese, about a boy with immigrant parents and his pain at not fitting in. Now you’re raising kids of your own. Are there things about the way they’re growing up that surprise you? Do you find yourself repeating things your own parents did and said? Is it too soon to try to say what, if anything, is distinctive about the experience of this third generation?

GLY: My wife and I have four kids. Our oldest just started high school and our youngest just started kindergarten. My oldest went to a K-8 that was predominantly Asian American. He’s now going to a high school that has a measure of diversity but is mostly white. I’m not sure how relevant American Born Chinese is to him, how much overlap there is between his experience and my own. It’s been hard for me to figure out, mostly because he answers all my questions with one-word grunts. Maybe I’ll know in a decade or so.

For whatever reason, I find it much easier to talk to other people’s teenage children. From what they tell me, many of the emotional realities behind American Born Chinese are still with us today. The immigrant experience is woven into the fabric of America. I just don’t see that changing, no matter what happens politically. And the immigrant experience is going to have an effect on my children’s lives because they’re Americans. Exactly what effect, I don’t know. But it’s definitely going to be there.