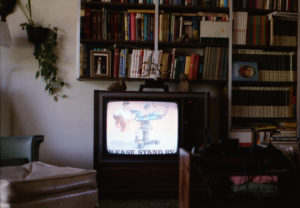 Several months ago, I found myself struggling with my hair—namely, snapping off my split ends in an obsessive manner, calling back to my teenage battles with trichotillomania. On some days, a half hour would pass before I realized I’d been zoning out and picking at my hair at the expense of folding laundry, writing, or engaging with my kids.

Months of incentives and redirection didn’t help. In order to reclaim my time and focus, I had to take drastic measures to remove the temptation altogether. I had to cut my hair short.

With no accessible hair to fuss over and, thanks be to God, no other major worries, my brain found itself looking for a place to go. It needed walls to bounce off of, something to obsess over. My sestina-writing project came at the perfect time.

A sestina is a form invented by the troubadour Arnaut Daniel in the twelfth century. Here’s the definition from the Poetry Foundation:

A complex French verse form, usually unrhymed, consisting of six stanzas of six lines each and a three-line envoy. The end words of the first stanza are repeated in a different order as end words in each of the subsequent five stanzas; the closing envoy contains all six words, two per line, placed in the middle and at the end of the three lines. The patterns of word repetition are as follows, with each number representing the final word of a line, and each row of numbers representing a stanza.

One of the best loved sestinas from the last century, and the first one I encountered as an undergraduate, is this understated masterpiece written by Elizabeth Bishop:

September rain falls on the house.
In the failing light, the old grandmother
sits in the kitchen with the child
beside the Little Marvel Stove,
reading the jokes from the almanac,
laughing and talking to hide her tears.

She thinks that her equinoctial tears
and the rain that beats on the roof of the house
were both foretold by the almanac,
but only known to a grandmother.
The iron kettle sings on the stove.
She cuts some bread and says to the child,

It’s time for tea now; but the child
is watching the teakettle’s small hard tears
dance like mad on the hot black stove,
the way the rain must dance on the house.
Tidying up, the old grandmother
hangs up the clever almanac

on its string. Birdlike, the almanac
hovers half open above the child,
hovers above the old grandmother
and her teacup full of dark brown tears.
She shivers and says she thinks the house
feels chilly, and puts more wood in the stove.

It was to be, says the Marvel Stove.
I know what I know, says the almanac.
With crayons the child draws a rigid house
and a winding pathway. Then the child
puts in a man with buttons like tears
and shows it proudly to the grandmother.

But secretly, while the grandmother
busies herself about the stove,
the little moons fall down like tears
from between the pages of the almanac
into the flower bed the child
has carefully placed in the front of the house.

Time to plant tears, says the almanac.
The grandmother sings to the marvelous stove
and the child draws another inscrutable house.

Before my recent sestina project, I’d written just a handful in my lifetime. With each completion, I’d stare at the finished product, amazed that I’d come up with anything, let alone a poem that made sense. But I’d never hunkered down to write just sestinas for a period of time. Over the course of a few weeks, I wrote, appropriately, six sestinas. Without a doubt, the poems gave my brain a place to go. My anxious synapses latched onto the spiraling pattern like barnacles on sea turtle.

When approaching sestinas, it’s all about the end words, or teleutons. How will the poet access those six words that will determine the shape and life of the poem? The six words that for all intents and purposes, become a prayer? I used various methods to see how the tone and process would change:

For my sixth sestina, I repeated #1, using whatever words had crept into my consciousness over the past few weeks.

Each method brought its own challenges (with #1, overall, being the “easiest” to write and #4 being the “hardest”). The result, however, was always the same: perseverating over a group of words—how they link in my life and consciousness, how they speak to one another in my spirit, and how they tell a story simply by being thrown together, like strangers stuck on an elevator.

Some words, like “hobby,” for example, which prompted me to research the Holly Hobbie from my childhood because I had completely run out of ideas, gave me no choice but to engage my challenge head-on by traveling to new places.

A theme that surfaced in most of the poems? Grace. Coming back to the same words seven times per poem forced me into making them work, finding meaning and purpose in their often irritating presence: You again? Already?

Life circumstances can dry you out, but they can also make grace bubble onto the cracked ground when you least expect it. Like those teleutons, you’re stuck with a thorn in the flesh, a relationship, a job, or even a traffic jam you never thought you wanted.

You can try to abandon life’s teleutons, and sometimes you need to. But other times you stay with them, continuing to return to them as you move within and around them, finding ways to make all things new.

“Sestina of Nazareth” by Tania Runyan

What do you want with us, Jesus of Nazareth?
The gospel-story demons spun like hamsters
in wheels until their prickly toes popped over
their heads. Then a spasm of grace
convulsed them out, and a man we’ll never know
shuddered bewilderedly under a woolen blanket.

I’ve come to believe in Prozac and weighted blankets
as my zap-healed! messengers from Nazareth,
and really, for all I know,
my daughter’s Russian dwarf hamster
burrowing into her teenage dreams is grace’s
biggest showstopper today. Or the popovers

caving before I could flip them from the special popover
pan. Even broken, their steam still rises, blanket
of flour and milk and butter like grace
on the tongue, like the body of Nazareth.
I’d said no, no. No gerbils or hamsters
ever again! No shavings or late-night scratching, no

wrigglers squishing their bodies under doors, knowing
they are captives here, shuddering and pooping over
our hands like–oh, hell–this hamster’s
adorable. My daughter grabs him, blankets
his tiny pelt with kisses like the woman at the Nazarene’s
feet wiping his blistered toes with her hair. Grace

is trivially lavish, a red-carpeted, Grace-
Kelly-danced-upon alley, as if we know
better than the giver, the smirking party planner of Nazarene
spreading out the donuts, brownies, and popovers
of daily miracles on a checkered blanket.
So many disappearing demons and reappearing hamsters

in this short life. Like a winterbound hamster,
I carry the nuts and seeds and cheap fillers of grace
in faith’s furry jowls. I make the blanket
statement we all repeat at 3am, that we know
it’ll all turn out in the end–blow or pop over
until we sleepwalk–drunk jaywalk–to crazy Nazartown.

I can blanket down, blame myself, or take a hamster
selfie and tag him as Jesus of Nazareth. Grace
expands any way you slice, butter, or pop it. All over.

Editor’s note: If you love Tania Runyan’s work as much as we do, consider joining her at the 2018 Glen Workshop in Santa Fe this summer. Learn more about her course, “Writer’s Block Workshop” here.