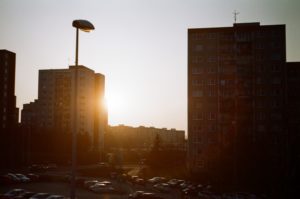 Wilkinson welcomes us into his poem with ease and familiarity, referencing “Sean” and “Jens” like we are all old friends chatting to kill time on our commute. The conversation begins with the mention of the “anaconda / they had found once / in Sean’s cattle pasture” and moves swiftly through visceral, associative memories: cleaning pigskins, performing autopsies, waiting in traffic only to see a naked “flower child” wandering along the road. Wilkinson’s poem is rife with dark, sensory flashes, met with casual consideration. These images root the poem in matter, matter like footballs, innards, brake lights, and a red bandana. Only at the end of the poem do we learn that these snatches of matter haven’t fully captivated the speaker; his thoughts wander back to the beginning of the morning, back to the ancient symbol of the snake. The anaconda subtly spans the poem, directing the stream of consciousness and providing the symbolic focal point. The snake often represents duality, and Wilkinson’s keen choice bookends the poem with a duality that elevates and reveals the coiling of life with death, violence with beauty, and truth with lies.

On the road before sunrise,
so none of us were citing
Homer, Keats, or Dickinson
during the drive to catch my flight.
Only after I’d asked did Sean
and Jens mention the anaconda
they had found once
in Sean’s cattle pasture.

From time to time
someone spotted the height
of egret whiteness
crossing daybreak’s blaze
or a runty marsh deer
sprung from her rushes
or a flock of wild turkeys
on the shoulder interrupted.

In heavy, unexpected traffic, Jens
talked of his old job at an abattoir,
how they cleaned and sent
the best pigskins
for making footballs.
Then Sean recalled how skillfully
his own son had eviscerated
their dead heifer for autopsy
a couple of weeks ago.

And as the lengthening string
of brake lights lingered,
Jens remembered a similar moment
some thirty years before
when a flower child, his hair
flowing from under
a red bandanna,
strode past lanes of stalled cars
as buck-naked as he pleased.

Though all of it passed over me
like sand over glass.
I wanted too much to know more
about a thing that could
swallow any of us whole,
as it had in Eden,
if my friends witnessed
some epiphany in the snake’s
ashen scales or those jeweled eyes,
whether his tongue was split
with a few dry morsels of truth
and many delicious lies.