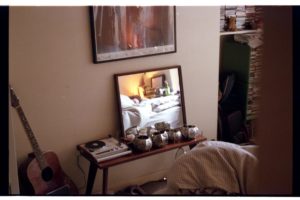 I don’t live a very active life, though observers might deduce that I am always late, leaping over railroad tracks in my early millennium Honda pilot to get to a pickup before my kids notice my absence.

It benefits me to preserve the appearance of a harried, overbooked mother of a large family, because it prevents well-meaning parish coordinators and parent-teacher organization officers from asking me to volunteer for things. And thus, it protects my beautiful midday window of total passivity, while the kids are at school.

Since this is the first year my youngest child has spent any time at school, I’ve had to do a little discernment about my purpose in life and how this time should be spent. For this year at least, I’ve decided to let discernment be my vocation—discernment of my muse—the fleet-footed, homeless Son of Man. “Foxes have dens, birds have nests. But the Son of Man has nowhere to lay his head” (Luke 9:58).

I recognize that this choice is a luxury. We don’t currently require an additional paycheck, a status that will likely change when my oldest begins college in a year. But for now, I think it would be a sin for me to ignore the precedence of my whole life preparing me to be a professional listener.

Though I have tried at times to suppress it, I stubbornly maintain a desire to write. There have been seasons of attempted novels, seasons of attempted memoirs, short stories, blog posts, and devotionals, but for now, I attempt to write songs because, for the first time in decades, my hands are free to hold an instrument.

Musicians are familiar with the concept of ear training, but most people practice it in various ways involuntarily. I have trained my ear to pull a bass line out of any piece of music, and to hear the spaces between notes. I’ve trained my ear to hear sounds of sincere distress when my children are playing nearby—over the sounds of replicated and amplified mock distress.

I’ve trained my ear to hear my own name, in public—how many times have I turned around only to find a woman calling her child who shares my name?

I hear every sound in my atmosphere on any given day, but what I listen to requires training. I’ve spent the better part Lent training what Saint Benedict calls, “the ear of my heart” to receive from God.

I have a tendency to be greedy for everything, absolutely everything, life has to offer: people, places, foods, talents, experiences. But since life is life, and I also have children, I’ve had to get used to unfinished business. Fulfillment is always only partial. I notice this in conversations: that I never get to say everything I hope to communicate, never have all the time I want to explore other people.

Relationships are slow to develop when you have small children, and you have to interrupt the deep conversations to change diapers or make sandwiches. I’m used to half-finished housework, the half-written novel, half-said prayer, half-lived dreams.

On Thursday nights, I play music with a band—lots of Grateful Dead/Jerry Garcia covers. Not long ago, I choked up playing the song “Sisters and Brothers”: “This world is not our home, we are only passing through….”

It’s not a song I particularly love playing, but there was something about inhabiting it for a moment as a musician, even while we were faking solos and messing it up, that provided a temporary moment of restfulness.

Somehow, the music could suspend restlessness and become a safe place to pause, even though Jesus says very clearly, “You will not rest.”

Music can create a Paradise moment, which is why it is so critical to prayer and liturgy. It’s a fleeting taste or experience of communion, a flash of Divine life that can whet the appetite for greater things.

There are so many substitutes. The Grateful Dead, for instance had a decent, love oriented, creative philosophy of life, even if they followed uncertain deities and did many drugs.

Drugs and alcohol so cheaply deliver a moment of fulfillment, or at least a pivot point at which someone sprawled on the concrete or barfing in the bushes, can say with all the clarity one possesses in that moment: It is finished.

The paradise moments are what I’m trying to discern this Lent—the fragments, the dimmed and divided Holy Ghost of God that makes it through the filters of my materialism and longing, to rest ever so briefly within that ear of my essential self.

I won’t be finished for a long while.