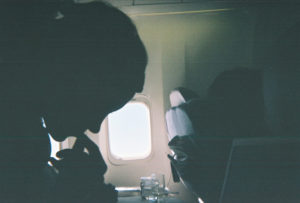 I took several short flights this month, the kind in which going through security takes longer than the flight itself and you wonder if you should have just driven. But what you can’t do behind the wheel, if you want to get to your destination intact, is write poetry. I challenged myself to write a villanelle on each flight and found the form quite conducive to bumping through the clouds.

Here’s the Poetry Foundation’s definition of a villanelle: “A French verse form consisting of five three-line stanzas and a final quatrain, with the first and third lines of the first stanza repeating alternately in the following stanzas. These two refrain lines form the final couplet in the quatrain.”

If you’ve read “Do Not Go Gentle into that Good Night” by Dylan Thomas, you’ve read a villanelle. And you understand the haunting power of the repeated lines and rhyme:

Do not go gentle into that good night,
Old age should burn and rave at close of day;
Rage, rage against the dying of the light.

Though wise men at their end know dark is right,
Because their words had forked no lightning they
Do not go gentle into that good night.

Good men, the last wave by, crying how bright
Their frail deeds might have danced in a green bay,
Rage, rage against the dying of the light.

Wild men who caught and sang the sun in flight,
And learn, too late, they grieved it on its way,
Do not go gentle into that good night.

Grave men, near death, who see with blinding sight
Blind eyes could blaze like meteors and be gay,
Rage, rage against the dying of the light.

And you, my father, there on the sad height,
Curse, bless, me now with your fierce tears, I pray.
Do not go gentle into that good night.
Rage, rage against the dying of the light.

At just nineteen lines, the villanelle is a short flight indeed, coming back onto itself not always so gently, like the flight that has to go east to Atlanta in order to get back west to Dallas because of who knows why.

On travel days, there are a lot of repeated refrains of takeoffs and landings, beeping boarding passes, and life vest demonstrations. And there are rhymes, too: the quick bites of bagels and stale pastries between gates that echo their carbohydrate heaviness. The faces of haggard parents and hurried business people that blend together from Milwaukee to Nashville to Cleveland.

But these flights (the longest was an hour and fifteen minutes) proved to be the perfect venue for writing in a fixed form. By giving myself a framework of the villanelle form within the framework of a takeoff and landing, I ventured in the security of knowing that no matter how unpleasant the journey, I had a good chance of making it to my destination.

Every landing was pretty rough (draft), but I landed indeed.

In my previous post, I discussed how sestinas—or, more specifically, the six repeated words therin—link my life and consciousness, always bringing me back to some form of grace as I seek meaning and purpose.

Villanelles, on the other hand, while still bringing me to unexpected places, operate on a different level during the writing process. Working with repeated lines rather than words, I find myself engaging in more immediate “headfirst” thinking, diving into conclusions at the outset, then seeing where those take me.

Put rather crudely, I find myself making meaning rather than finding my way into it, which is a reckless and often strangely whimsical place to be for someone who both craves epiphanies of faith and avoids taking herself too seriously.

And as one who has always favored “telling it slant” over catechizing in my poetry, I find the villanelle’s tendency to “rage, rage” at the reader, even when done beautifully, a little unnatural for my style. Which, of course, is exactly what I needed to freshen up the spiritual tenor of my work.

Over the course of a month, I wrote five and a half (don’t ask) villanelles, and four of them in flight. Because I challenged myself to write these drafts on short flights (one being only forty-seven minutes long), I had to come up with a plan.

Behold, my flight from Cleveland to Milwaukee on a cold Wednesday night.

“On the Tarmac” by Tania Runyan

The windsock flutters like a fish
suspended in a hazy bowl.
I close my eyes and vainly wish

that my mind, too, can dip and swish
freely from a steady pole.
The windsock flutters like a fish.

Running late, I dropped a dish,
let it hurtle through the towel.
I closed my eyes and vainly wished

not to be twenty-nine and rich,
but rippling, sunstruck, in my soul.
The windsock flutters like a fish.

The engines roar, the airplane lifts.
I grab the seat back for control,
close my eyes and vainly wish

that my temperament would switch—
ah—to butter melting on a roll
or a windsock fluttering like a fish.
I close my eyes. In vain, I wish.