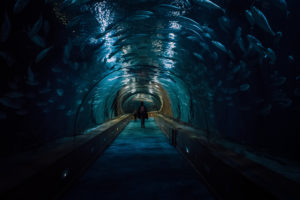 I found myself engaged in another maddening conversation with my four-year old daughter. We were discussing the aquarium we were going to visit the next day. She wrinkled her nose and pronounced that she wouldn’t go.

“Why?” I asked, more than a little impatient.

I assured her that we would keep her safe.

“Yes,” I said, “you are,” thinking of the tickets we’d already purchased and out-of-town friends we’d meet there.

She cried and flung herself onto the couch. “But the sharks! But the eels!”

I had no pity. My heart was a steel trap of already-made plans.

My daughter has a history of fixating on small worries in her life—every night there was a book or a toy I needed to take away, and so many questions about death and existentialism that I’m unprepared for. As she wades deeper into an awareness of life, I just try to get us through as best as I can.

And I really wanted to go to this damn aquarium.

I patted her back and told her we would discuss it the next day. She went to bed despondent. I discussed the predicament with my husband, but there was no getting around it. We would be going there in the morning, even if it killed us.

Before I went to bed, I read a bit of Anne Lamottt. Catching up on her essay collections, I just happened to read one she wrote on being an overly sensitive child.

“For Pete’s sake,” Anne’s parents would tell her as she told them her fears—of the scary masks on the wall, of the strange behavior of the adults at the drunken parties held in her home—“what an imagination! Get over it, honey.”

And so she shrunk into herself, and ever deeper into her sense of isolation. She writes:

None of the adults in my life ever once remembered to say “some people have thick skin and you don’t. Your heart is really open and that is going to cause pain, but that is an appropriate response to this world. The cost is high, but the blessing of being compassionate is beyond your wildest dreams.”

I was struck with a memory from my own childhood. When I was nine, my family went to a used car dealership. We had just come from a prolonged period of rootlessness—traveling the country in an RV for two months, being involved in short-term missions for six—and we were finally going to be settling down in Northern California.

I remember the colorful pendant flags blowing in the sun, the earnest salesman convincing my parents to spring for a beautiful dark-green Subaru. This car, however, was a bit out of our price range, and so my parents started discussing loans.

Due to all of our travels and unorthodox ways I was highly attuned to any money conversations, and worried about our homelessness and joblessness. I was afraid our family running out of money, but also of having too much and being tempted not to share. (I also worried about orphans in China, hungry children in Ethiopia, children without access to Bibles in Russia.)

My parents were shaking hands with the salesman when I started sobbing in the parking lot, underneath the great white tent.

“Don’t do it!” I cried, striving to be able to articulate my innermost feelings. “Don’t go into debt!” I wailed, aware of how much I feared being beholden to others, to a certain type of life.

The salesman was surely taken aback when my parents got down on my level and listened as I tried to explain my dread. And in the end, they walked away from that beautiful green car, sleek and low to the ground, buying instead a box-shaped, battered gold Chevy Astro.

That car, precisely within our economic means, smelled of old tuna fish and carried us to our next adventure. My parents told this story in later years, shaking their heads at my histrionics, at the incredulity of the situation.

But when I was nine, sitting in our new-to-us van, I felt the flush of safety that only comes when one has been heard. Like in the parables that Jesus loved to tell, I was already aware of the weeds of the world and how easy it was to get tangled in cars and houses and careers that choked out the original joys of the kingdom.

I remembered all this and I woke up the next morning and talked with my daughter.

We discussed the thickness of the glass at the aquarium; we came up with a contingency plan in case there were sharks and eels (her daddy would carry her quickly through the exhibit); she confided that a little boy at preschool told her that a shark could eat her up. Her eyes brightened at the mention of beluga whales and she took a deep breath and agreed to go.

We met up with our friends, who have a six-year-old daughter, and entered the aquarium together. There was a large tank in the center of the building, circular and full of aquatic life. I spotted a few small hammerhead sharks and bright-green electric eels; my husband and I eyed each other nervously.

My daughter sidled up to the glass and stared hard into the murky water. “Yeah,” she looked up at her friend and let a new word roll off her tongue, “creepy.”

Later on, in a different part of the aquarium, the kids tried on battered penguin costumes while I stared at the beluga whales, entranced by their lumbering beauty and tranquility. My daughter slowly flapped her arms and demanded I look at her; my little penguin, so determined to suss out what is good and true and what is not.

She is too sensitive for this world, just like so many of us.

Bless the gifts of soft hearts and thin skin; may we be like children who are the first in the kingdom of God.

This post originally appeared at Good Letters on March 18, 2015.

D.L. Mayfield lives and writes in Portland, OR with her husband and two small children. Mayfield likes to write about refugees, theology, and downward mobility, among other topics. Her book Assimilate or Go Home: Notes from a Failed Missionary on Rediscovering Faith was released in 2016 by HarperOne. Her website is dlmayfield.com.