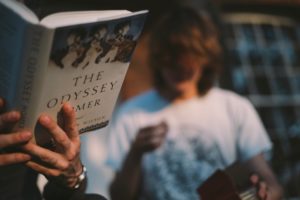 I happened to be in the midst of re-reading Homer’s Odyssey when the current issue of Image (#96) came in the mail. At the end of the issue are the rich reflections, by various poets, on poetry and worship. After sinking into them (even being drawn into deep prayer by Emmett Price’s powerful reflection on the hymn “Stand by Me”), I began to sense a new dimension in the Odyssey. As I let translator Robert Fitzgerald’s iambic pentameter weave the ancient story through my mind, Homer’s poem started to feel like liturgy.

Here’s what I mean—and I speak as a Roman Catholic, though what I’ll say applies to all the liturgical churches. As when experiencing the liturgy of Mass, while reading the Odyssey I feel moved along by a rhythm and language and set of meanings that are way beyond my sole self. I’m being moved, in each case, by a cultural construct originated millennia ago and carried on through the ages, and I’m drawn into it gratefully.

Now, one response to being carried along by a cultural heritage way beyond my little wink of a life might be to feel dwarfed by it, to feel insignificant. But my response is the opposite: I feel enlarged.

Just think what a burden it would be if we each had to construct by ourselves the meanings of our lives. Instead, we’re gifted with works of art that offer shape and rhythm and significance to all we individually are and do. (Liturgy is, to my mind, a work of art par excellence.)

In the Odyssey, as in liturgy, the gods are constantly called to mind: not only in rites dutifully performed, but also in the strong belief that they are ever-present, guiding human affairs. Athena is continually popping up at Odysseus’s side, though in a human disguise. Usually he can discern that it is she. I breathe easier whenever she appears, because I know she’ll guide Odysseus into morally good behavior. And not only guide him; assist him.

Don’t we believe the same of our God? And isn’t our liturgy designed to give thanks for this ever-present power of divine guidance?

One must stay alert, of course, to listen for God’s guidance. And willing to cooperate with it. For Odysseus this means, for instance, entering into the roles that Athena creates for him. When he finally reaches his homeland, Athena determines that he must remain unrecognized by the suitors who have taken over his manor and vulgarly wooed his wife in his ten-year absence. And so:

Speaking no more, she touched him with her wand,
shriveled the clear skin of his arms and legs,
made all his hair fall out, cast over him
the wrinkled hide of an old man, and bleared
both his eyes, that were so bright. Then she
clapped an old tunic, a foul cloak, upon him,
tattered, filthy, stained by greasy smoke,
and over that a mangy big buck skin.

But the gods’ will is that this disguise will serve more than one purpose. It enables everyone whom Odysseus encounters to show their moral stripes by the way they treat this disgusting-looking beggar. Odysseus’s faithful swineherd Eumaios passes the test. He welcomes the bedraggled stranger into his hut because, as he says, “all wanderers / and beggars come from Zeus.” (“Whatever you do to the least of these…”)

Not only this. Eumaios prepares a fine meal for the beggar, preparing it according to the prescribed ritual to honor the gods. After ordering his herdsmen to “bring in our best pig for a stranger’s dinner,” he slaughters it and then:

Eumaios, taking flesh from every quarter,
put lean strips on the fat of sacrifice,
floured each one with barley meal, and cast it
into the blaze. The rest they sliced and skewered,
roasted with care, then took it off the fire
and heaped it up on platters. Now their chief,
who knew best the amenities, rose to serve,
dividing all that meat in seven portions—
one to be set aside, with proper prayers,
for the wood nymphs and Hermes, Maia’s son;
the others for the company.

Eumaios gives the best cut of meat to the disguised Odysseus, who responds:

May you be dear to Zeus
as you are dear to me for this, Eumaios.

To which Eumaios replies:

Bless you, stranger, fall to and enjoy it
for what it is. Zeus grants us this or that,
or else refrains from granting, as he wills;
all things are in his power.

I don’t mean to suggest that our Christian beliefs are wholly congruent with the religious beliefs underpinning the Odyssey. Of course they aren’t. But as I read Homer’s poem day after day, I feel gratefully embraced by the gods, or (for me) God, who order the universe toward ultimate good. I feel personally sustained.

As I do by the liturgy of the Mass. “Where two or three (or three hundred) are gathered in my name.” “Lord, I am not worthy that you should enter under my roof,” and yet you enter. Odysseus has Athena ever at his side; I have Christ. Who’s to say that the Holy Spirit didn’t appear as Athena to Greek culture centuries before the angel said to Mary of Nazareth: “The Holy Spirit will come upon you, and the power of the Most High will overshadow you; therefore the child to be born will be holy; he will be called Son of God”?