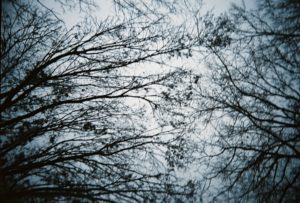 Paul Kingsnorth, an essayist and novelist who lives on a small homestead in Northern Ireland, joined me in a conversation yesterday about the need for silence and truth telling in the stories humans construct. We contine our exchange today.

Ragan Sutterfield for Image: In the face of the environmental crisis, which you described yesterday as spiritual, the question we ask is: What can we do? In your essay “Dark Ecology” you offer a response put another way: What would not be a waste of time? Your first suggestion is to “withdraw.”  What does that mean?

Paul Kingsnorth: This gets me into all sorts of trouble, or at least it used to, with activists. First of all, I think the solutions proposed by Paul Hawken, Bill McKibben, and other well meaning people who do good work, are just futile, to be honest. At some level I think they know the futility.

They say, “well it probably won’t work, but we have to try something,” and that energy drives them. I think it is completely impractical to imagine that we can create some global sustainable society for ten billion people in which everyone has Western-style human rights and consumerism and there’s equality and justice. Call me a cynic, but I don’t think it will happen. There’s already enough carbon in the atmosphere to cause untold chaos.

It seems to me that we end up with the kind of world that Ted Kaczynski predicted in his manifesto and what many sci-fi writers have predicted: we end up with this machine society where we have very little human freedom and we have total monitoring and controlling of almost everything and we have so many people that it is hard to have any relationship with anything that is non-human… It’s a kind of machine hell that we are building and I don’t want to live in that whether it is sustainable or not.

It’s fine to get involved in the daily practical work of changing politics and economics if you want to, but if you want to get to the bigger, deeper stuff, then running away from that and going to the edges and getting your hands dirty, and taking time to have a different relationship with places and with yourself is important.

When I was a younger writer I wanted to change the world, but now I’m more interested in the longer term questions of where we went wrong and where we might go instead, and that’s the work of a lifetime. I think Gary Snyder said we are involved in a 5,000 year journey of learning how to live well with the earth and we’ve just started after industrialization. If I live at the center I can’t do anything useful. I can’t do anything useful if I can’t see the stars and get my hands dirty sometimes.

Image: You’ve completed two novels in what I understand is to be a trilogy, beginning with The Wake and continuing with Beast, and now you’re working on another novel set a thousand years in the future. I read a review of Beast and the reviewer didn’t get the link between it and the sort of storytelling you call for in your essays. Talk about your trilogy and how it relates to your larger vision.

P.K.: Beast was deliberately written so as not to be explained. It did confuse a lot of reviewers, which was quite fun. Some people will read Beast and have no idea what is going on and others will read it and see what is happening. The people who seem to really get that book are those who understand the outline of a spiritual quest. People who don’t get it and have never considered any spiritual or mythical aspect of life just think its gobbledygook about a guy going mad.

The notion of the trilogy is to explore people’s relationship to place and to the mythic and religious aspect of life over a 2000 year period. The central characters (narrators) of each novel are related to each other, but don’t know that. They come from the same part of England, and they all have a relationship with places, with landscape itself, and with the history of those places which is active and not entirely under their control.

I’m trying to make the places themselves, and the voices that speak through the places, characters which intercede in the story and have relationships with the narrators to different degrees.

With The Wake that takes the form of the narrator’s relationship with the old gods of England and the very specific part of the country he comes from and his relationship with the land and his difficulty in leaving it. He sees himself as deeply a part of that land as any of the trees or any of the other creatures that live there and the novel traces what happens when he is ripped away from that place by an invading force.

Beast is a much more intimate quest. It is about a man looking for god, looking for his soul, looking for truth, something he’s not even sure of. He is almost found by a place, the spirit of the place, and what is says to him or what it wants from him.

The same themes will be carried into the book that I’m writing now which is set a thousand years in the future.

We have an economic and political model that promotes placelessness. It promotes mass movement of people and capital, urbanization, internal dislocution, taking people off the land, putting them into cities, and turning us into deracinated consumers who don’t really need to do anything other than press buttons and swipe cards to get anything we want.

And the whole system is about disconnecting ourselves from the rest of life. That’s what we are living through and those are the themes the novels are tackling. What does it mean to belong somewhere and what does it mean to take seriously the notion that the place you’re living knows you’re there; that the earth is alive and that you’re an expression of it?

Ragan Sutterfield is a writer and Episcopal Priest living in his native Arkansas. His most recent book is Wendell Berry and the Given Life.