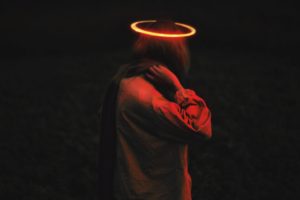 Hank’s trembling confession that he’d be killing God if he killed another inmate had charged the small jail visitation cell where I sat discussing the image of God with three men from the infirmary. I pulled out the last of three “icons” and passed it around. It was a color printout of the crumbling Sphinx in Egypt—its nose fallen off, all color worn away by sand and time.

“How have we, have you, become like this? If we were made images of God, works of art, how have we been defaced?” I asked.

I don’t remember what the three men said. Only how quickly they laid their own hands—hands that had done who knows what—over own their faces, when I’d suggested we pray for healing in this way. That God restore his image in us. A work of art restoration.

Hank spoke through his fingers. “I’m so sorry.”

Hearing this, John the middle-aged man who sat in the middle, hid his face in his red scrub shirt. It was apparent how afraid he had been living with Hank, and this repentance was a ceasefire. John fell apart. Hank reached out and held John’s arm, and John then wept behind his shirt. “I’m sorry to you, too,” Hank said, as if he was just now seeing his cellmate for the first time.

I wrapped up the prayer—asking God to restore our faces. That God’s glory might be seen in us once again.

Maybe such glory had already started to seep out of these men’s faces.

But a week later I would see a much fuller image of what such glory could look like.

I visited Hank one-on-one. It was through the glass. We spoke into heavy black phone receivers at our ears.

He said he’d been thinking about his calling, this man who knew he’d die in prison. He’d discovered, since our last encounter—or since his encounter with the makeup mirror icon—a value in his distorted life. It could be restored, he now suspected. He smiled. His wrinkles and ragged hair were the same, but he seemed tender, tired, and I might say glowing, like a mother just back from the hospital with a newborn.

“I think God’s calling me,” he said, “to go to prison, but not to be afraid. To go to that awful place and say to the worst men, ‘You can kill me. I don’t care. I’m a child molester and a murderer. And I’m here to tell you God can forgive everything. That God loves you.’”

He looked through the glass, saying it while looking into my eyes, but looking into the eyes of countless men in lockdown America. “‘God loves you. And I love you.’ I’ll tell them all.”

I’ve been reading about a love-crazy old monk who spent much of his life in caves, Saint Isaac of Syria. The old saint says the pinnacle of holiness is the humility that sees oneself as worse off than all others, and so surviving on mercy, leaks it all over other people. The way Hank was now exclaiming.

Before this visit the officer at the front desk had informed me that the professionals from Western State mental asylum had come that week. They’d met with Hank for a thorough evaluation, to determine if he was mentally competent to stand trial for his murder. He was not.

“I’ll offer to hold their hand, right there,” Hank continued, “and pray for them. If they say no, that’s ok. I’ll tell them still, ‘God loves you. So much.’” He shaped his hands around something one again, as he said this, so gently.

In the Russian Orthodox tradition, faith makes room not just for men and women to spend the end of their days in cells, in constant prayer, as monks and nuns, but also for the mentally abnormal. There’s a careful respect for the “holy fool.” I first learned about holy fools, like many Western readers, in the pages of Dostoevsky. They’re all over the place in his stories, even the leading “hero” in one novel. There’s an uneasiness around these weirdos who might be crazy in the mental illness way, an “idiot”—but who might also be “touched,” as we would say, strange in the way that holiness always is strange, weird and “off,” and not in tune with our normal ways of thinking.

I could picture Hank, the holy fool of the prison hallways in years to come: tearing up at yard while others jogged by doing their laps, telling his story over plastic trays in the mess hall, tough gangsters avoiding him or giving snickering high fives to him, this teary, wild-eyed old man saying he’s the worst of all sinners but God can forgive everything, and that he loves all of them and will even hold their hand to help them know this.

He might get killed after all. For fools, and the mercy of God, are not easily tolerated in such places.

Today’s post is continued from Thursday June 21 and originally appeared at Good Letters on March 26, 2015.