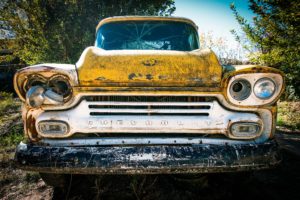 I think it’s good for me when my stereotypes of others are challenged.

Like this recent experience. I was taking a walk in my neighborhood and approached a parked Jeep from the rear. Covering the spare tire hung on the back was a huge American flag with the words “The Only One.” My instinctive response, given the horrors of the Trump administration, was to say to myself, “Thank God there’s only one of our country.”

Then my eyes fell on the Jeep’s bumper sticker: “Skip Prime Time—Read a Book.”

I felt instantly chastened. How elitist of me to assume that a proudly flag-waving American wouldn’t also enjoy reading books.

Another parked car that I walked past not long ago (I take a daily walk, so this is when I tend to see the world—or at least my neighborhood) had two stickers on the back bumper.

One had a photo of our planet from space, with the words “Love Your Mother.” An environmentalist message. The other had a photo of a smiling baby with the message “Choose Life: Your Mother Did.” An anti-abortion message. Again my stereotypes were shattered.

Here was “Mother” invoked for what I assumed were incompatible messages. Could a pro-life person also be an environmentalist? Evidently so.

OK, just one more. Another car I saw about six years ago. The car was a Prius, driven by a white man, and it was stopped at a traffic light as I walked past. With a shock, I noticed its bumper sticker: a photo of President Obama’s head, with the words “Somewhere in Kenya a Village is Missing its Idiot.”

What shocked me, even more than the crass racism, was that this racism was displayed on a Prius! Weren’t Prius owners all liberals?

Back to the American flag, which I stereotype shamelessly. If a house in my neighborhood has a big American flag hanging from the front porch, I assume the owners are fanatical Trumpian “patriots.”

So you can understand why I’m so taken by something that Nigerian novelist Chimamanda Ngozi Adichie said in her TED talk called “The Danger of a Single Story”:

“The problem with stereotypes is not that they are untrue, but that they are incomplete. They make one story become the only story.” Then she went on: “The consequence of the single story is that it robs people of dignity.”

And robs them also, I’d add, of their complexity. I wish I could have had a chat over coffee with that Prius driver with the racist bumper sticker. What would he have said about climate change? About undocumented immigrants? About abortion? I honestly don’t know. But I expect I’d be opened to him as someone with many different “stories.”

A friend of mine preached recently on John 15:9-17. With reference to Jesus’s exhorting the apostles to “love one another as I have loved you,” she remarked on how impossible this seems—because God loves everyone equally. How, she asked, with all our prejudices, can we love like this, like a God who excludes no one from the beloved community?

And she challenged us: “Perhaps we might ask ourselves whom do we still exclude? Who is it that we can’t imagine learning from? People of color? Women? Muslims? Refugees? Those who are poor? Disabled? Those of a different sexual orientation? Or opposing political views?”

We exclude people because, to return to Chimamanda Ngozi Adichie’s language, we have a “single story” about them. This single story, she adds, “makes our recognition of our equal humanity difficult. It emphasizes how we are different, rather than how we are similar.”

Focusing just on the bumper sticker mocking Obama, I’d feel different from (and superior to) the person placing it on his car. But when I see it on a Prius, I feel humbled. I’m forced to acknowledge the driver’s complexity — which I’m afraid I don’t myself have.

My political opinions all fall into a “progressive” clump. A single left-wing story. Of the list of frequently excluded groups in my friend’s sermon, people of “opposing political views” are those I’m guilty of excluding.

The bumper sticker on my Prius (if I owned one) would say: “Keep the Immigrants. Deport Trump.” How sadly predictable I am.