THEY STOPPED BINDING YOU a while ago, probably because they think you won’t try anything, that you’re too far gone now. You think they’re right. The only time they still use the blindfold is when they do their thing, when they make shallow cuts in your chest and upper arms and thighs, their laughter razor blades tumbling around inside empty oil drums. Of course it gets them off (you have to sit tied to the chair, listening to them rutting), but in your cooler moments you realize there’s also something ritualistic about it. Atavistic ceremony so that the sun will rise for them tomorrow.

She’s still jittery. Still so goddamn jittery, he says. Her large dark eyes in the rearview mirror gleam at you like stones in a river: cruelty, fear, confusion. Your own eyes plead with her again, are rebuffed.

Again you pray for destruction. If there is a God. The rash of tornadoes scouring Missouri, which the car radio chronicles, holds out awful death-bearing hope. You want one to drill down on the car and whisk you away like Dorothy to some dreamless obliviated Oz. But it’s a bright hot clear morning as you wheel south—he says all the way to Mexico—the only clouds in the sky pretty white affairs like stucco on aquatint. Nothing dark. Nothing to see but sunbaked green.

I swear that black car’s been follin us, she says, looking over her bare brown shoulder. Her pink muscle shirt has slipped, revealing the placid purple-black face of an angel tattoo on the wing of her shoulder. She notices you noticing it and her eyes fill up with absurd fear. Please, you mouth. She turns around quick and starts to spin the pistol around her finger agitatedly.

Quit that, he says. Stop being stupid.

I feel something after us.

He scoffs, Fuckin’ baby, and flicks his cigarette out the window. You track it as it zips past. Maybe it will light a fire that will burn everything away.

A thin steel mist rises from the ground, smoking in the saffron sun. Herons wade in green pools, striking at the reflected sky. Beautiful black cattle with tags in their ears graze in the fields, their tails going like lazy pendulums. You breathe in sharply: you can still use the word “beautiful.”

Whenever you stop to eat he calls it chowtime. Whenever you pull over to find a restroom he calls it draining the lizard. He calls gas push water. When you crossed the state line he said, Missouri loves company, and flashed a tobacco-stained smile at you in the mirror, as if you were old friends.

She continually loads reeking pinches of marijuana into a pipe, coughs out thick storms of smoke, trying to mellow out, and he swats at her hands and thighs, telling her it’s making her paranoid. I can’t deal with you when you’re like this, he says. He takes occasional sips from a jar of powerful-smelling liquid crammed between his legs. I keep tellin’ you: we’re in the clear.

You drive through tiny towns where everything battles with rust. Train tracks, heaps of gravel. Thick scrambles of trees. Gas stations where the attendants wear greasy coveralls. Metal sheds. Grain elevators. Buildings abandoned, houses boarded up. The city halls are the smallest, most forlorn-looking in the world. All the places have similar names: Ash Grove, Walnut Grove, Oak Grove. They boast businesses called Big Daddy’s Bait and Clair’s “C” Market. (He bought you a chicken sandwich at Clair’s “C” Market.) They are populated by girls with pathetic dye jobs and men dressed in ripped faded jeans and hideous bright T-shirts with eagles and pumas on them, men with gray blond beards and camouflage baseball caps, men who always have a condom in their wallets. You want to cry out to them but never manage. You’re too far gone by now. They’re right.

Around noon he says he wants to show her something and he pulls off the highway again and onto back roads khaki-colored with dust. Barbed wire stretched between untrimmed logs sets off pastures stippled with daisies. Hawks hover on thermals, tethered to the fields by hunger.

Where we goin’, Bowman? she asks.

Hell, you think. Must be.

My uncle was from round here, he says. He takes a sip and steadies the car on the road. His eyes are cloudy like a snake’s when it’s about to shed its skin. She lights one and he lets her.

You ride by sad, sagging abandoned houses beaten down by rain, snow, and sun, by broken barns with guts of darkness. The roads rise and fall in quick sharp hills that make your stomach whistle. Cattle crowd under trees and in ponds, paralyzed by the heat. You can still use the word “beautiful.” The sky has grown cloudy. Long fingers of light reach down to rake the earth.

Finally he pulls into a driveway, little more than a dirty gouge grown over with weeds, and stops the car. You pile out obediently and he escorts you both into the house, a dark, dilapidated ruin eructating mildew and cat piss. It looks like no one ever lived there.

It was different then? she asks. He mutters in a noncommittal way.

Once he had my sister here, he says. I wouldn’t, so he tells me, If you say word one I’ll slit your goddamn throat.

As you stand in the shadowy rotting house it starts to rain. The drops zoom through the broken roof like bullets.

He took her to the clinic and they flushed it out of her. If the woman there knew what it was, she never said a word.

What happened to her after? she asks.

A train, he says, and lights a cigarette.

The TV’s issued several weather alerts, but now an infomercial man, trying to scam people in the name of Christ, says, Sow your seed in Elihu Ministries.

When we release the seed that is in us, God showers down blessings. Put that seed…on your credit card.

Does the credit card have naked ladies on it? he jokes, grinning at you with Cheetos in his teeth.

They’ve given you a bed this time. From it you regard him blankly.

Shit. That was funny. Laugh or something. He pelts you with Cheetos and you turn away.

She steps out of the bathroom naked, still damp from a shower. You see that her breasts and stomach are covered in pale scars like shards of silver. She looks defiant in her nudity.

Put some goddamn clothes on, he says to her. This ain’t the Playboy Mansion.

Make love to me like you used to, Bowman.

I ain’t never made love to you.

You can’t look away from the pale runes on her body, and touch your own burning stomach.

Besides, he says, with this one watching?

She approaches him silently, talking with eyes of smoke and cloud. You catch her eyes briefly. An intention is there, pulling you in like a vortex, but you don’t understand it.

That’s different, he says. She is undeterred. He’s already begun to undress. Well, then, let me put my seed on you. He cackles as he flings his pants away.

But I want a baby, she says, climbing over him.

Earth ain’t no place for kids. I learned that a long time ago. His tongue goes to a long white scar. She shivers.

You get up and go outside and lean on the railing. Nowhere to go. After a while you hear them. It begins to rain, but you stay put, get drenched. Twice more you hear them. It begins to hail, hard grapes pelting the wretched earth, popping and rolling in the parking lot, pressing out an icy wine of wrath, but you don’t go in. Not until you’re sure they’ve finished. The stones bruise you. When you return, the room is dark but for the blue aura of the TV, of the same infomercial urging, Sow your seed and reap your future. You hear a train rushing in the distance, rattling the windows.

The room reeks. He lies curled against her chest, snoring over the scars that stand out clearly in the blue light, glistening like diamonds in her sweat. On his brawny white shoulder a red face grins beneath ram’s horns. She cradles his head in her arms and looks at you queerly. The same intent. You think she’s going to get the pistol and shoot you. It would be welcome. But her eyes go to the table. To the car keys.

Make a place, she says. You do it.

Can’t make me, he says in his sleep. Perhaps. One of her breasts has half swallowed his lips and cheek, a storm surge of flesh. He should go under. Can’t make me.

You do it, she says again.

You steer the car through the clattering of hail and refraction of tears. No one else would brave this; there’s not another car on the road. White stones knock on the windshield, wanting admittance. You can feel them under the tires.

She was you, once. When he wakes up and sees what she did, he’ll beat her, cut her, kill her. Nothing less. She’ll shatter along her scars. You can feel it in your own. You should go back, stop it, try. But what could answer such perfected cruelty? Earth ain’t no place for kids. You can see the wreck of his life before you on the road, but not your own.

From behind you comes a sound like the end of the world riding a freight train. No going back. The tornado whirls down in violent softness, filling the rearview mirror with the pursuant ruin for which you prayed. It will smash them both to dust, annulling and uniting her penance, his wrath, whatever it was that had happened to them before. Lightning beautifully scars the night. There’s a voice addressing you in the whirlwind. At the center, you know, is a motionless clarity. 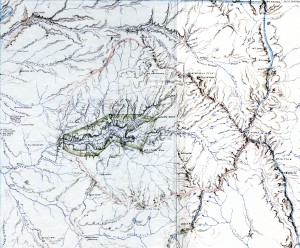 A Map of the Watershed