Image: How has your cultural background contributed to your work?

Sarah McMenimen: Half of my family is Native Hawaiian (Kaˉnaka Maoli) and the other half were European settlers who moved to Texas. Both were formed by colonial ranching and agriculture. My family on Hawai’i lives in an area between one of the oldest ranches in the US and Mauna Kea, a colonial and ancestral site. Living in places with asymmetrical relations of power takes negotiation. So I’ve always tried to work by addition and not subtraction. Addition suggests assemblage, a formal strategy I try to make use of. While the balance of power might seem obvious in ranching (e.g. who works on the ranch, and who owns it) there is still some leveling out. Everyone literally has to get dirty at some point.

Image: Are there spiritual or ethical questions you struggle with over and over?

SM: I’m especially concerned with how we live and learn with animals. As an animal behavior consultant, I use procedures to change how an animal acts, so the ethical questions are direct but complicated. Just because we can train an animal to do something, doesn’t mean we should. We ask related questions in art, but it doesn’t always feel as immediate.

The psychologist Susan Friedman addresses these issues in an exciting way, which reveals the established order as unnecessary. I think this is a collective task. She works with parrots and in the zoo world—another site I’d like to explore, as it has quite a bit of moral ambiguity and asymmetrical power structures. For me, working with canines involves rethinking punishment, coercion, and inherited social structures. Moving away from a punishment mindset, to me, is pretty radical. Humans are fluent punishers, and it changes our navigation in the world to let go of that. 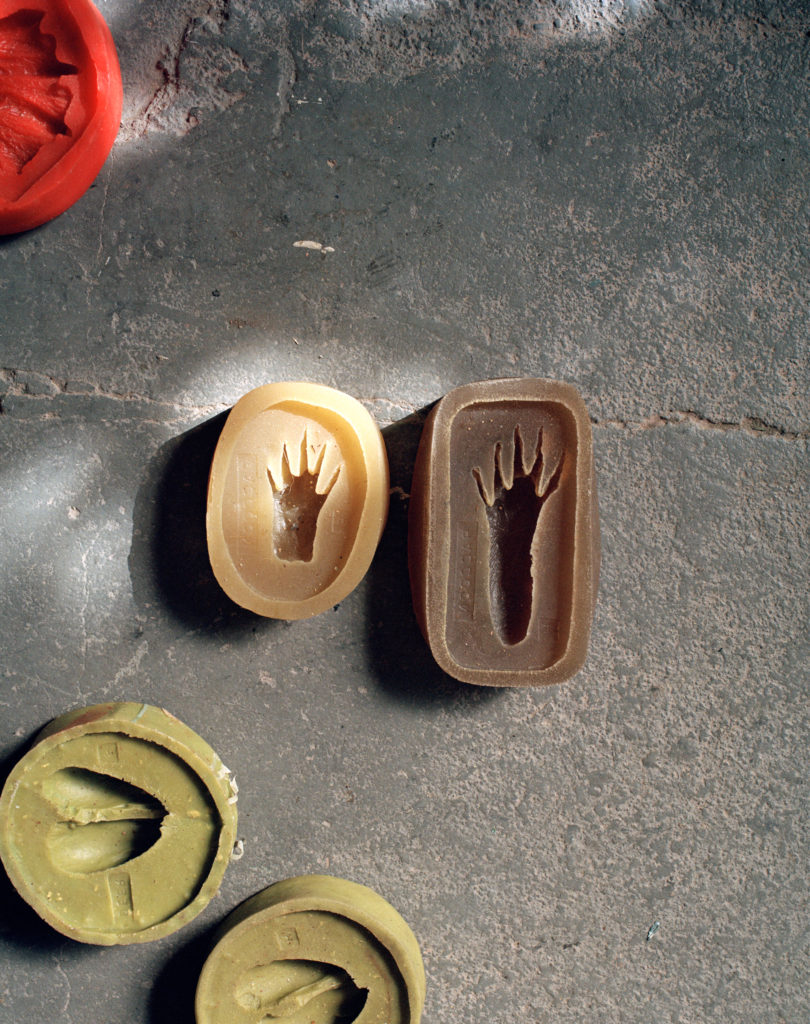 Image: What drew you to working with animals? And can other species be artists?

SM: I see now how, even from a young age, I was always shaped by non-human animal relationships. Animals don’t use signs or symbols; they mostly communicate through an index of information—scent, sound, movement. Attempting to think this way has changed me as a subject, and I’m constantly needing to hone my observation skills in order to be better at my profession in animal behavior.

I hesitate to say that animals are artists, because I think that role is linked to a kind of labor that is specifically human. But they have things to teach us about art. Think about animal play, for example. Play requires role reversal and deskilling, which seems like an important—though maybe undervalued—part of art-making.

Image: Your creative practice is informed by experiences like animal tracking, which is pretty unusual for an artist. What have these experiences taught you?

SM: Animals are a real thing and not merely a human abstraction. Animal tracking is empirical knowledge, so basically anyone in the world can participate. It’s also predominantly male. In hunting, for example, the overarching narrative has something to do with power or a very linear idea of evolution. As I see it, we are constantly co-evolving with animals, which might have a spiritual implication. 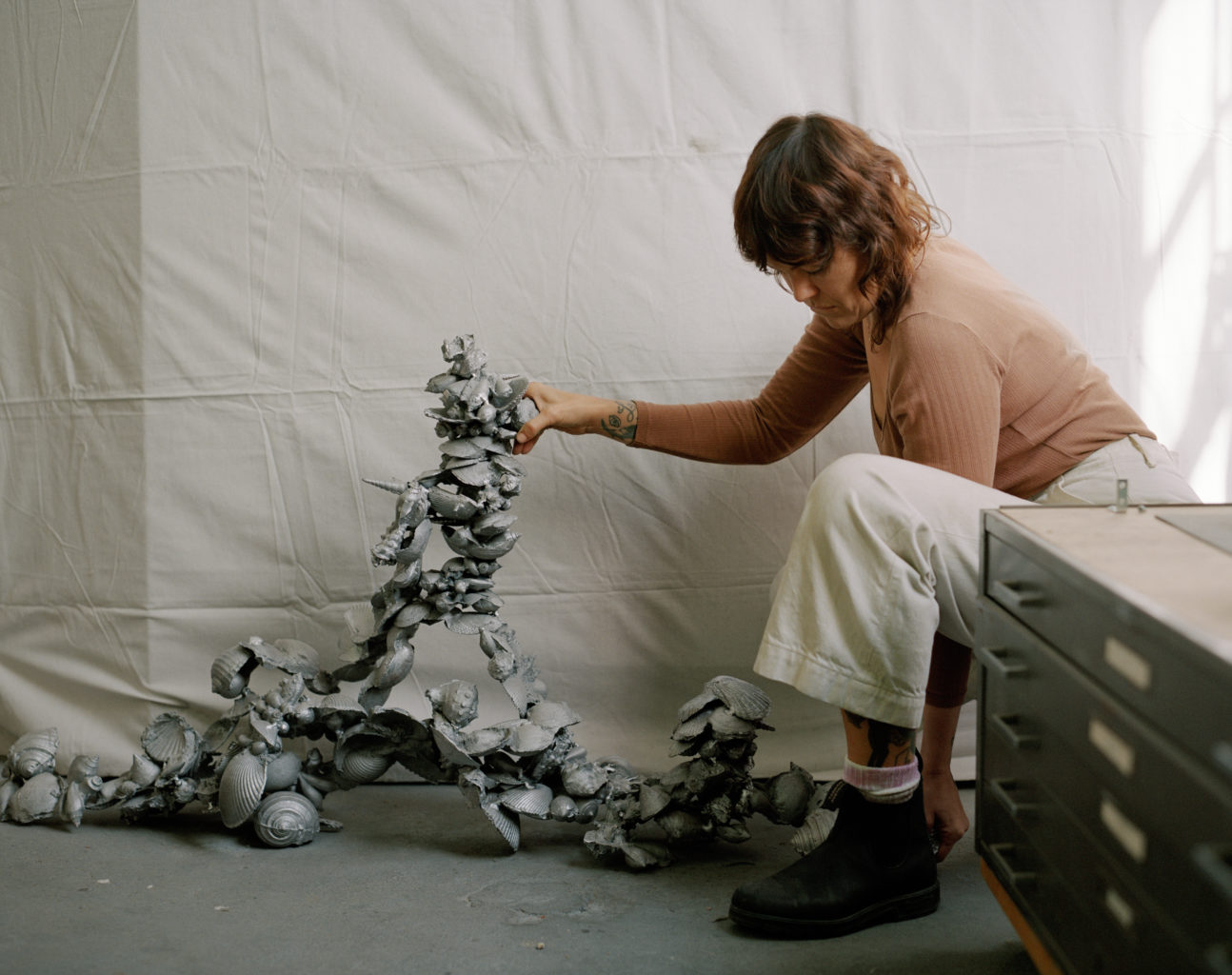 McMenimen in her studio with an in-process aluminum sculpture. Photo: Gillian Garcia.

Image: What do you think “environmental art” has got wrong and right? What new horizons do you see for how artists might engage ecology in the future?

SM: I’ve seen some projects that impact native flora and fauna in detrimental ways. I’m also skeptical of art that requires you to make a journey to see a large piece in an otherwise untouched landscape. It’s too similar to ideas of manifest destiny.

I’d like to see artists engage in collective futures for the environment (collective futures being a way of thinking that considers what a future looks like for the many, rather than the few in power). I don’t think that necessarily needs to happen outdoors or in a natural setting. A site like a zoo can be such a slippery, interesting site for art-making.

Image: What has been the most surprising response to your work?

SM: When people expect it to have a specific message. I’m committed to the experience of art as nonverbal, as an exercise in knowing that the current order of things is not necessary or preordained. We are always becoming done and redone. 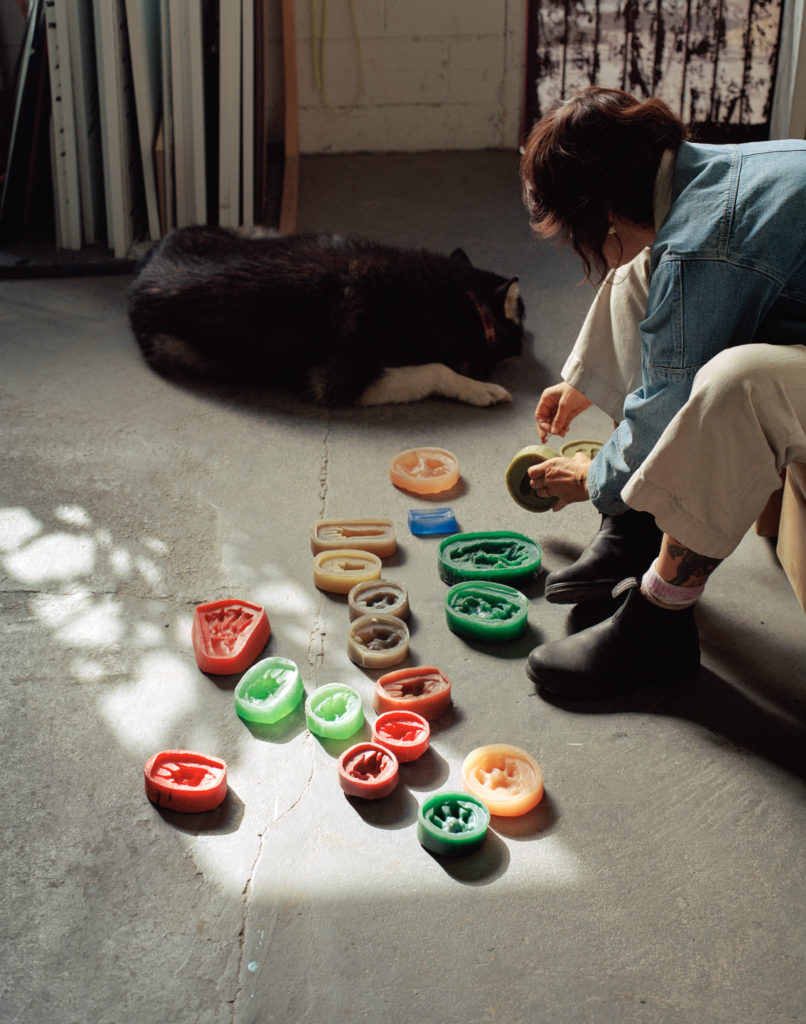 McMenimen in the studio with her dog.

Sarah McMenimen is an artist and animal trainer who blends material-based investigation with interspecies communication practices to prompt new ways of thinking about ecology. Born in Honolulu, she received an MFA from UCLA and attended Skowhegan School of Painting & Sculpture. www.sarahmcmenimen.com