Issue 89 features the work of graffiti and installation artist Mohammed Ali, whose murals appear in cities all over the world, from his native Birmingham to Melbourne, Dubai, and Kuala Lumpur. He also performs collaboratively with musicians and poets. In the accompanying essay, George Dardess describes the way Ali sees his work as part of a centuries-long tradition of popular art that asserts “human values otherwise obscured or eroded by ideological uses of images.”

Image: In his essay on your work, George Dardess writes about the importance for Muslims of working to strengthen the ummah, or community of Islam. Can you talk a little bit about what that means to you as an artist, or just as a person?

Mohammed Ali: I belong to many different communities—I enjoy wearing different hats. It’s part of who I am and I’m comfortable with hybrid identities. I’m a son, a husband, a father. I can be all of those without compromising any. I am also part of the Muslim ummah, part of a global family. I feel a sense of responsibility to continue the work of the great Muslims before my time. They have guided us and inspired us, shown us how to reconcile our faith with a complex modern world, shown us how our faith plays a part in building society for all. Be it Malcolm X, who eventually embraced [the entire Muslim community] regardless of skin color, or Muhammad Ali the boxer, who stood for the truth no matter how unpopular—I am proud to call these people part of the ummah. Building our ummah can only mean building a better world for all, regardless of faith.

Image: Some of your performance work happens in collaboration with poets. Can you tell us a little bit about what’s fruitful for you in the connections between spoken words, written words, and images?

MA: When I studied art as a teenager, I found it difficult to choose a medium to focus on. Was I going to be a painter, or a sound artist, or work in film? I pursued all of it and enjoyed exploring different media. Now, when I put on more theatrical events, where I can play with different media and immerse the viewer in the art forms—I feel there can be nothing more powerful. When you engage the audience with visuals, sounds, colors, all of it choreographed and sequenced, you have them eating out of your hand. It’s quite magical, bringing all the art forms and artists together.

Image: Though you’ve painted murals all over the globe, many of them are in Birmingham, where you grew up, and your work seems somehow grounded in that city. What was Birmingham like when you were growing up, and do you see your work as reflecting that particular city?

MA: Birmingham is a gritty city. It was once known as the “city of a thousand trades,” with a big manufacturing industry, which eventually drew new immigrants, including my late father in the 1960s. Why does an artist like me still reside in a city like this instead of moving on to London? Birmingham is where my father chose to live. It’s where I was born. It’s where he is buried, and where my children were born. This city made me who I am. The struggles to be accepted as a second-generation immigrant here shaped me. It gave me the strength, made me resilient. I feel a duty to stay put, to build for the future generations who will call this city home.

Image: You’ve founded an organization, Soul City Arts, that brings together artists, activists, and communities with the goal of transforming society. Can you tell us a little bit about some of the work Soul City Arts does, especially about how the arts can be transformative?

MA: I wholeheartedly believe in the arts as the most powerful tool for transformation. I have been exploring my own art for a while now, creating one-off forms of magic here and there, and that brought great results, but I wanted to build something more strategic, something longer term. After I’m gone and my art dies, I wanted a system in place that wasn’t just about my art, but a strategic approach that would build up hundreds of artists committed to transforming society in radical and inventive ways. Prejudice and inequality are not going anywhere anytime soon, and it’s our responsibility to begin to dealing with these issues, as nobody is going to do that for us. There’s no Malcolm X or Muhammad Ali to fight for us against hatred and injustice. It’s upon our shoulders now. Soul City Arts is a movement, a small but growing group of people who are here for the long haul. 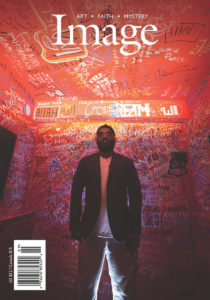 Image: Can you describe your Dreamcube installation in Kuala Lumpur? Most of your work is murals, but this is something different. Was that a collaborative project? How did people respond to it?

MA: Nothing beats painting an ugly brick wall on a busy street. My heart lies in the transformation of dull facades. There’s a magic in that. However, I wanted to explore how I could paint around something without a wall’s edges confining me. I began building cubes in public spaces and painting their outsides. I loved letting art burst outside the boundaries, letting it cross the edges and wrap right around the corner—as if I were battling the edges and I won.

The cubes became popular, and I loved observing people as they approached them, how they moved around them. My plan had worked! I felt the 2D surfaces were giving the viewer a very limited experience, where the only thing that moved was their eyeballs—up and down, left and right. Now people were walking around and around. Each corner would entice the viewer to walk around the edge to discover what was on the next side, and the art would travel across the corners seamlessly. There was a sense of harmony with the cubes as they became structures that people would circumambulate, like the cube structure, the Kasbah, in the holy city of Mecca.

But then something struck me. I overheard a young girl ask her father, “Dad, what’s inside the cube?” That was the beginning of the Dreamcube. I thought, why not take people inside of a cube and play with that? With the Dreamcube, I wanted to transport viewers into a different dimension, cut off from the outside world, to immerse them in color, sound, poetry, dramatic lighting, video, animation. And after this, I wanted them to respond, to pour out their hearts onto the walls. There are few public places where people can just write their thoughts. Society needs an outlet for people to just scribble, to leave their mark for others to see. It’s part of our story as human beings going back to rock carvings tens of thousands of years ago. I’ve often spoken about in my public lectures on the power of public art and the history of graffiti, and these ideas made their way into the Dreamcube. There were markers available, and I asked people to respond through audio prompts: a poet engages you and encourages you to write your innermost thoughts and visions, your dreams of the future, your aspirations, to let it pour out and cover the walls.

Eventually it was just simply beautiful. When you entered, you were literally swimming in the minds of all of these people, like you were floating inside their heads. You saw so many intimate thoughts scrawled onto every surface; it was like a temple of dreams. There is something powerful about writing down your visions or hopes; it takes them from abstract to tangible and real. I felt the Dreamcube empowered people to realize their visions; absorbing the dreams of others was simply infectious. At the start, the first visitors were unsure, but eventually as the comments built, you could not hold people back.

I stood outside the Dreamcube and asked people how they felt as they exited. They spoke about “feeling something they never ever had before,” pointing to their chests. Some people became emotional. Who would have thought a marker and a plain wall could instill such emotion?