The day comes when you are outgrown and then you are approaching the void, which seems to me to be the most desirable thing, the thing which contains the most meaning. —Carl Jung

From the age of fourteen to thirty-seven, I was a dedicated member of an evangelical fundamentalist global church movement. While I had not grown up within any form of organized religion—I was raised by nonreligious maternal grandparents—I joined this movement as a vulnerable teenager and remained wholly committed to its strict ideology for most of my formative years and into adulthood. As a thirty-seven-year-old, I underwent a traumatic reevaluation of my faith and left the movement. It was my newfound relationship with the camera—an apparatus presenting itself as a sealed casket, sequestered from surveillance—that unlocked deeply held secrets, facilitating a liberation of the unconscious. Drawing on the tenebrosity of Caravaggio and the half-light of George de La Tour, I found revelation under the cover of darkness. 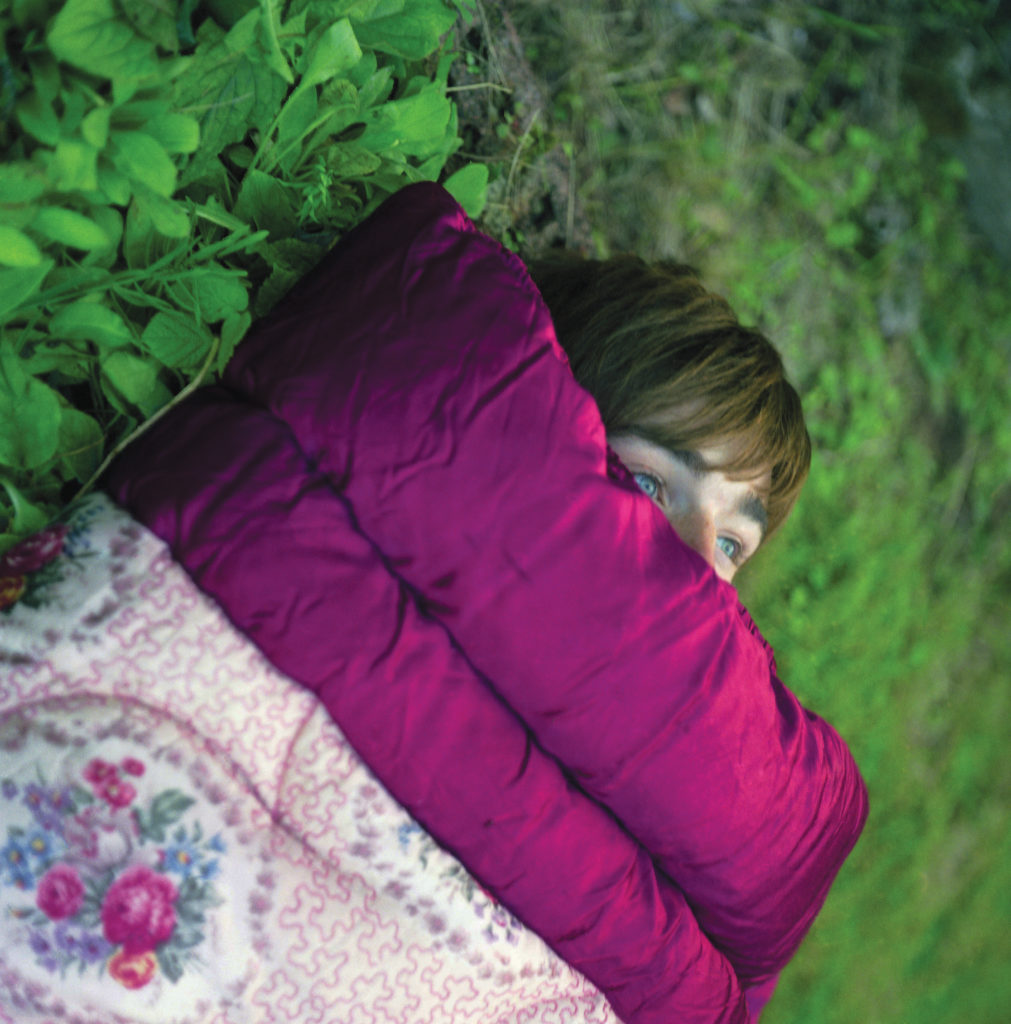 My search for spirituality in the wake of a fractured religious identity entailed welcoming what Jung calls “the shadow.” Photographing at dusk in a somber garden, I used the unnerving experience of encroaching darkness to facilitate a psychological mining process. Poets from antiquity onward have used the image of the locus amoenus, or “pleasant place,” a protected garden of comfort and delight. In my imagination, the locus amoenus is captivating in multiple senses, like the lush and fragrant garden where Calypso kept Odysseus cloistered on his voyage home. A sensual undercurrent stirs in this pastoral idyll, like Eden on the eve of the fall. 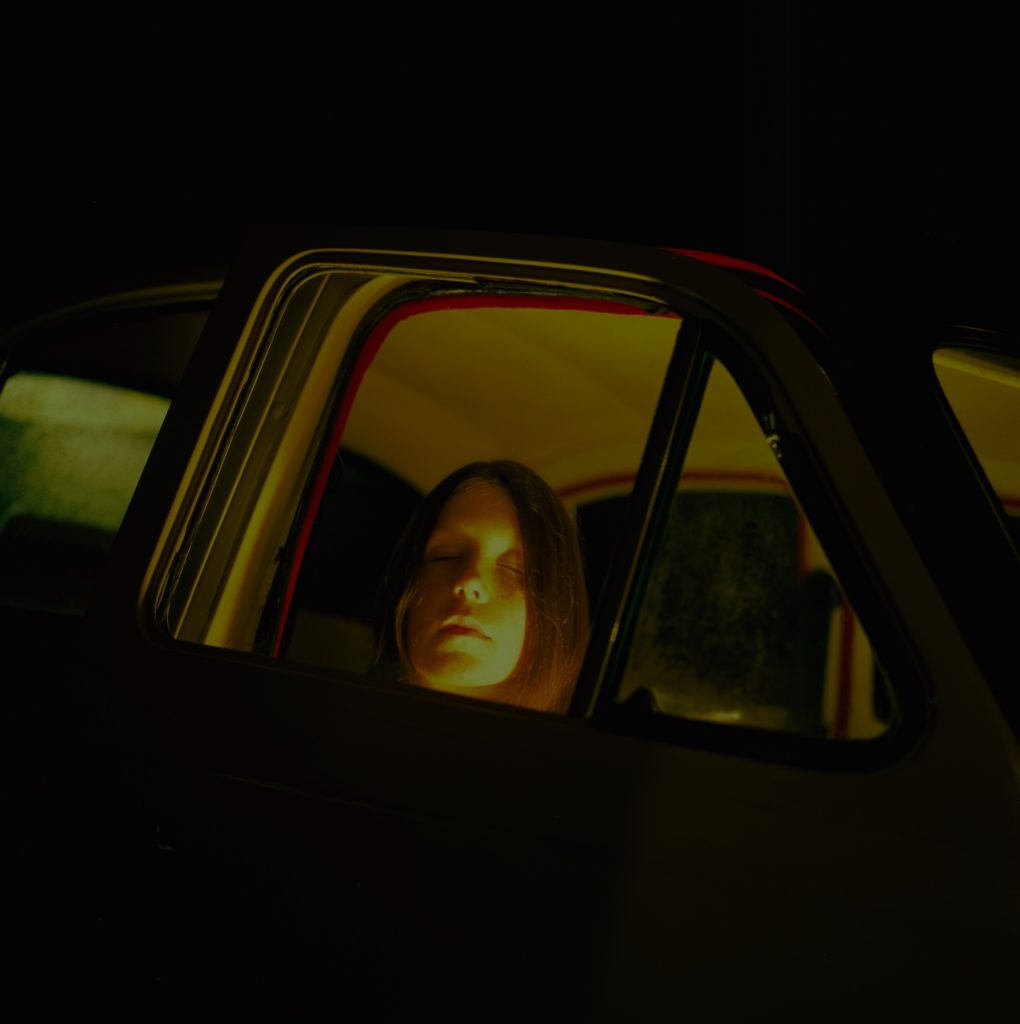 The formulation of Undersongs was fraught with misgivings for me. Speaking to the environment from which I had recently emerged, I wanted at all costs to avoid the dual risks of slander and proselytizing. What was the work about? How would I communicate its context? What was the right balance between obscurity and revelation? The artist Allan deSouza speaks to the tension between an artist’s deliberate obfuscation of meaning and a desire for democratic vision. Fears of a dogmatic, overbearing practice can arrest clarity of communication. However, he contends, “ambiguity fails to address that there might be something at stake that requires a more unambiguous response.” As my own work progresses, I realize that what is at stake, ultimately, is the duty to tell not just my own story but those of other, silenced voices. 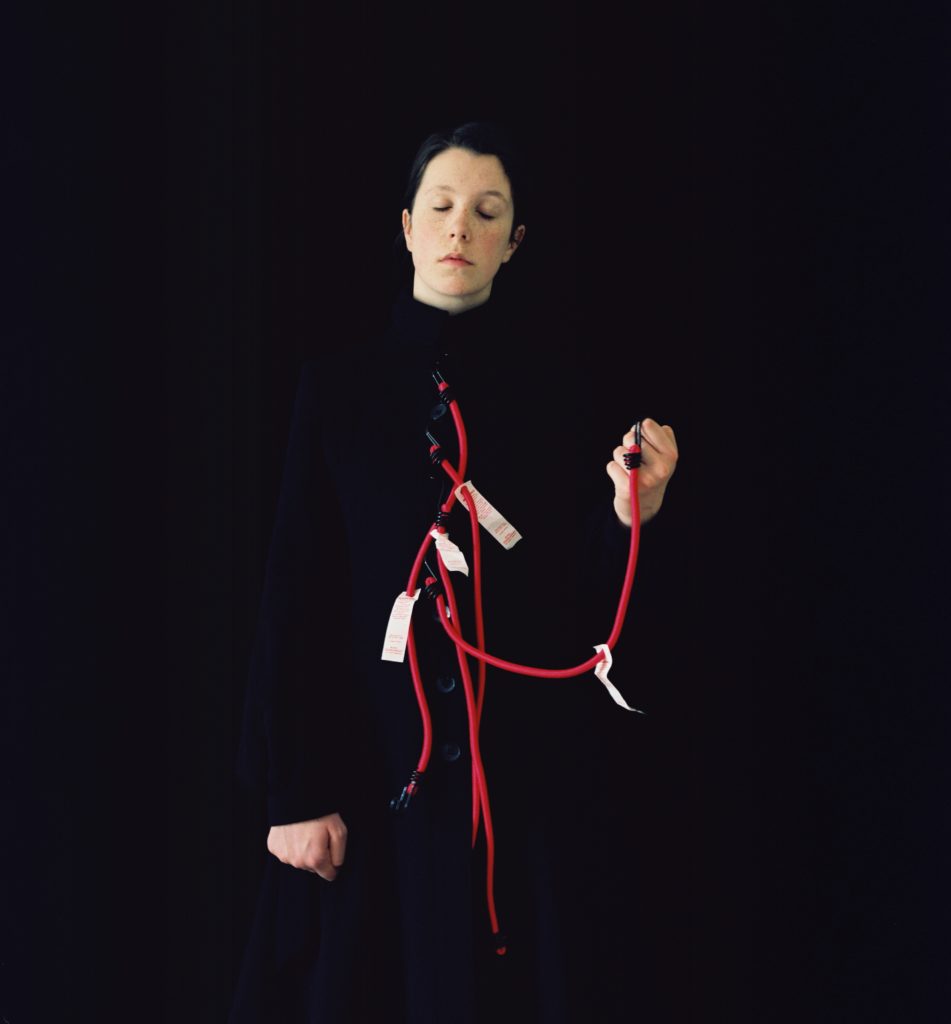 The Catchers is a series that uses both my own and others’ bodies as subjects. Placing figures in apposition to highly charged objects, I sought to communicate both distress and release, emotions that had been stringently controlled and mediated in my evangelical community. This was a body in confinement, one whose existence had been sublimated. Deployed as protester, my camera became a welcome comrade as I examined themes of ideological manipulation and control. It was a dangerous business and not wholly comfortable. For a long while, my youngest daughter and I worked together. No face resonated as much as hers, and it was she who helped me to tell my story. 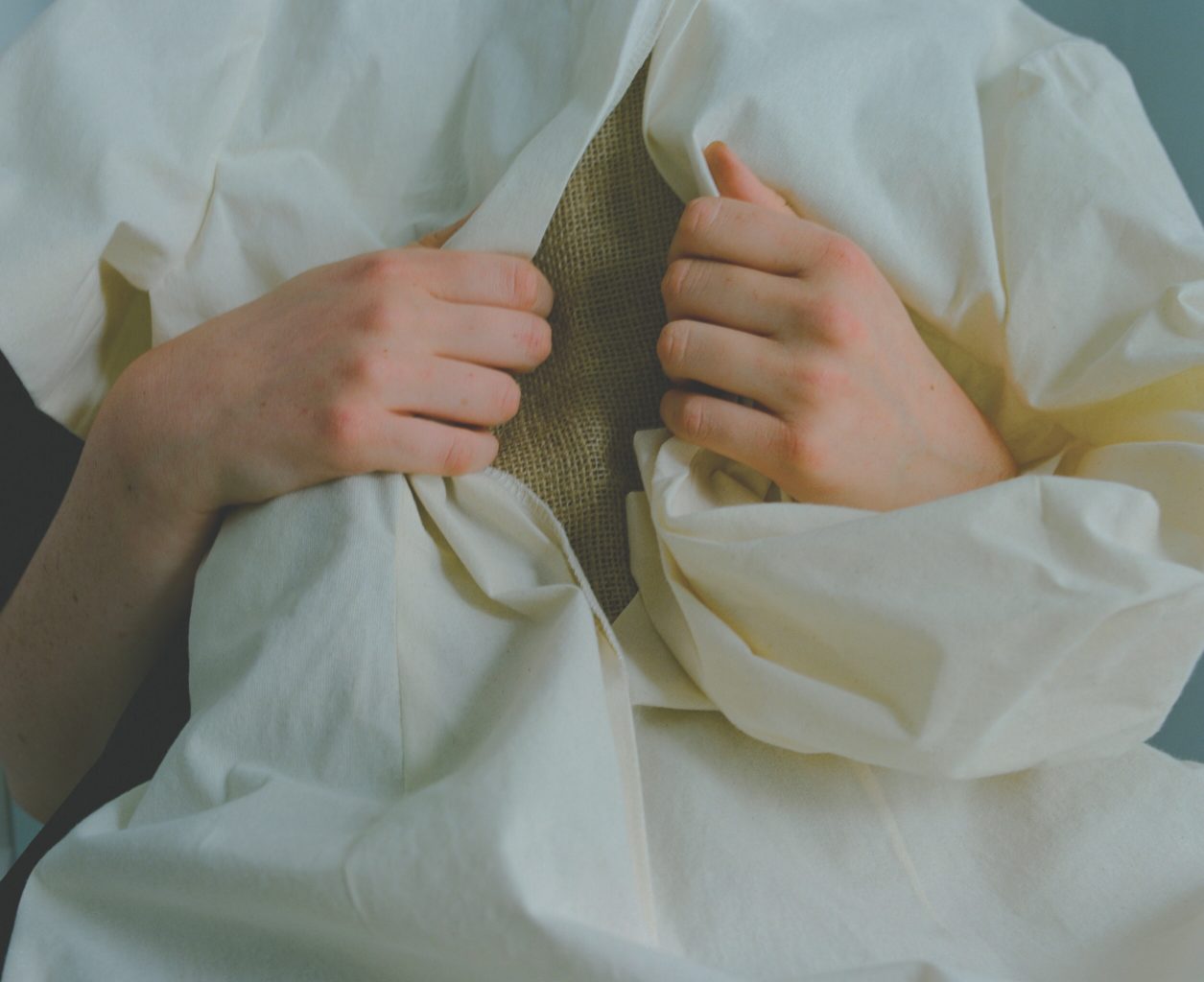 The hair shirt, or cilice, was a penitential garment woven from animal hair. This fabric’s use was strangely twofold. As tent material, its impermeability provided protection from intemperate weather, yet when worn next to the skin, often alongside twigs and sharp wire, it became a form of abasement. In this work, I open the question of whether such forms of self-abnegation are truly gateways to holiness. Marta becomes my protagonist, seeking out another mode of reality. 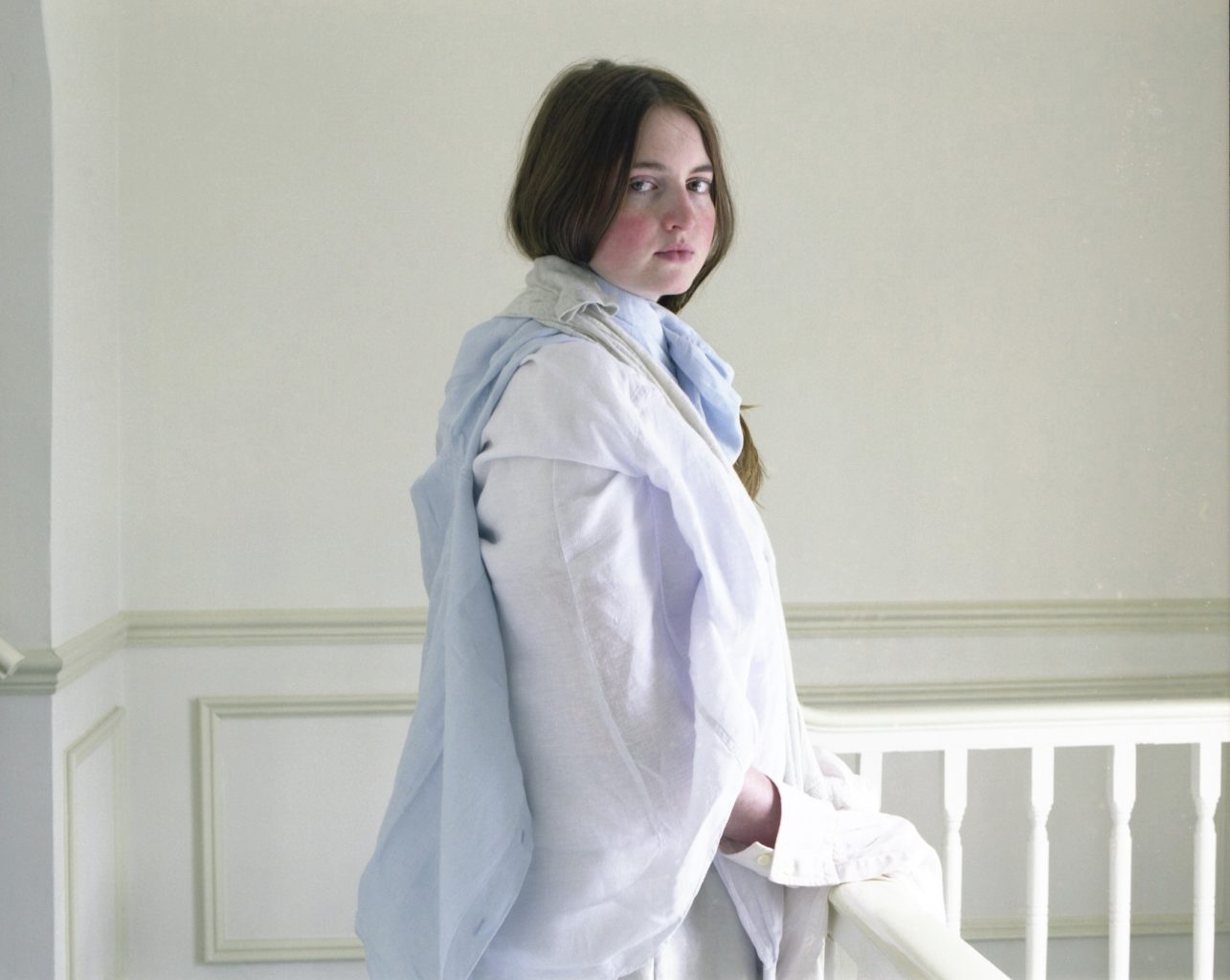 Photography is a curious melding of the mechanical and the metaphysical. At its inception, excitement over this new technology was far reaching: it offered a heady mix of the scientific and the spiritual. Enthralled late-nineteenth-century audiences greeted pictorial representations of ectoplasm spilling from the mouths of twisted bodies and ghost-like apparitions as evidence of a spiritual vision that reached beyond the three-dimensional world. What I lost in my exit from a fundamentalist faith movement, I found inside the closed chamber of my camera. Acting as a space of unfiltered communion, disassociated from former experiences of the sacred, the camera let me continue my explorations of the numinous in new forms. 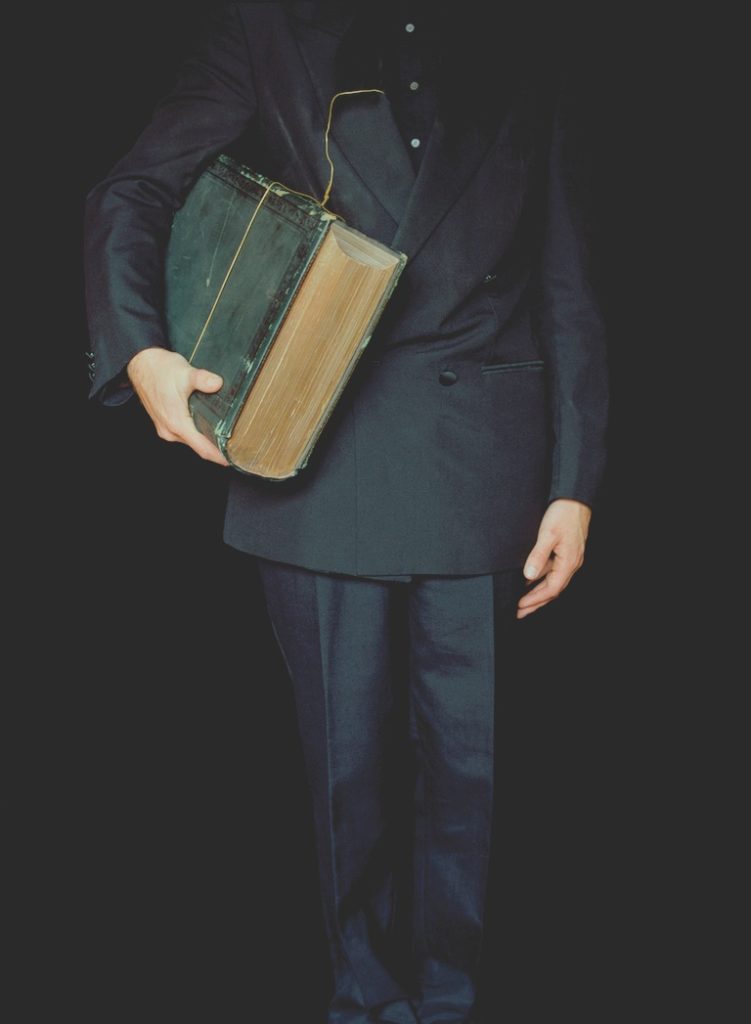 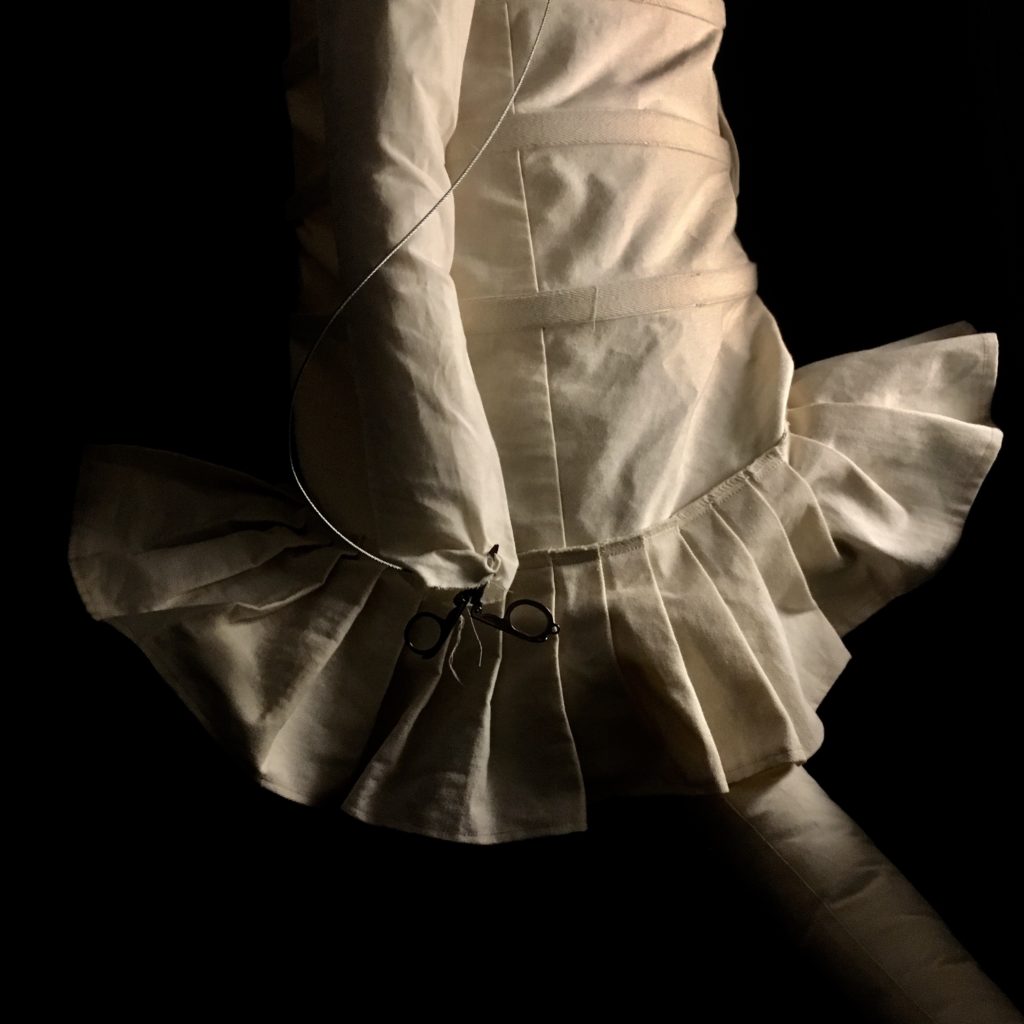 The male figure stands in half light. Upright. To attention. When we made this photograph, my friend and I were both aware of its weight, its density. And it was a burden for us both. The female figure speaks to a sutured wound, deeply embedded, yet capable of being revealed by the tug of a thread. 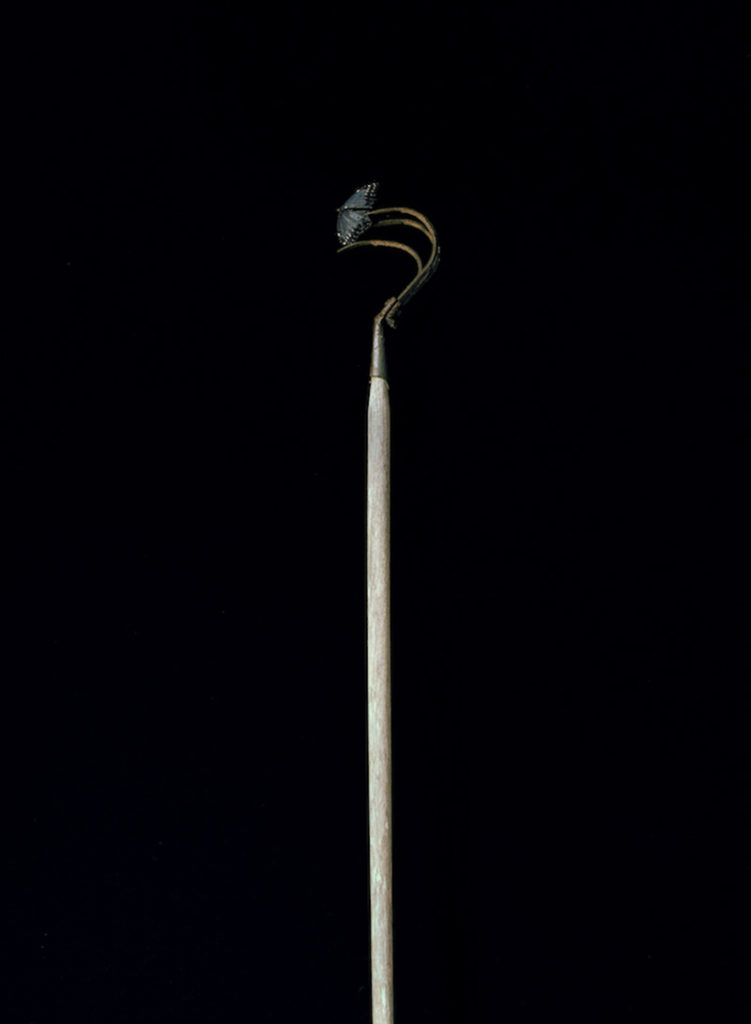 With over a decade separating me from the paradoxical experience of comfort and confinement within a tight-knit faith community, I approach both artistic practice and spirituality from a place of psychological liminality. Staring down into the ground glass of my camera lens offers a certain resolution. But can it reveal the transcendent? Can it ameliorate loss?

Sherry Turkle, in Evocative Objects: Things We Think With, describes bricolage as “a style of working in which one manipulates a closed set of materials to develop new thoughts.” And yet the bricoleur knows she does not produce fixed forms. She does not deconstruct the familiar to reconstruct yet another immovable structure.

Thus, the butterfly/cultivator photograph remains the most difficult to tolerate. What may not emerge from this juxtaposition—of delicate insect and jagged tool—is permanent freedom of movement. The wings of the butterfly, with their fine-spun scales and fragile veins, can be damaged beyond repair. 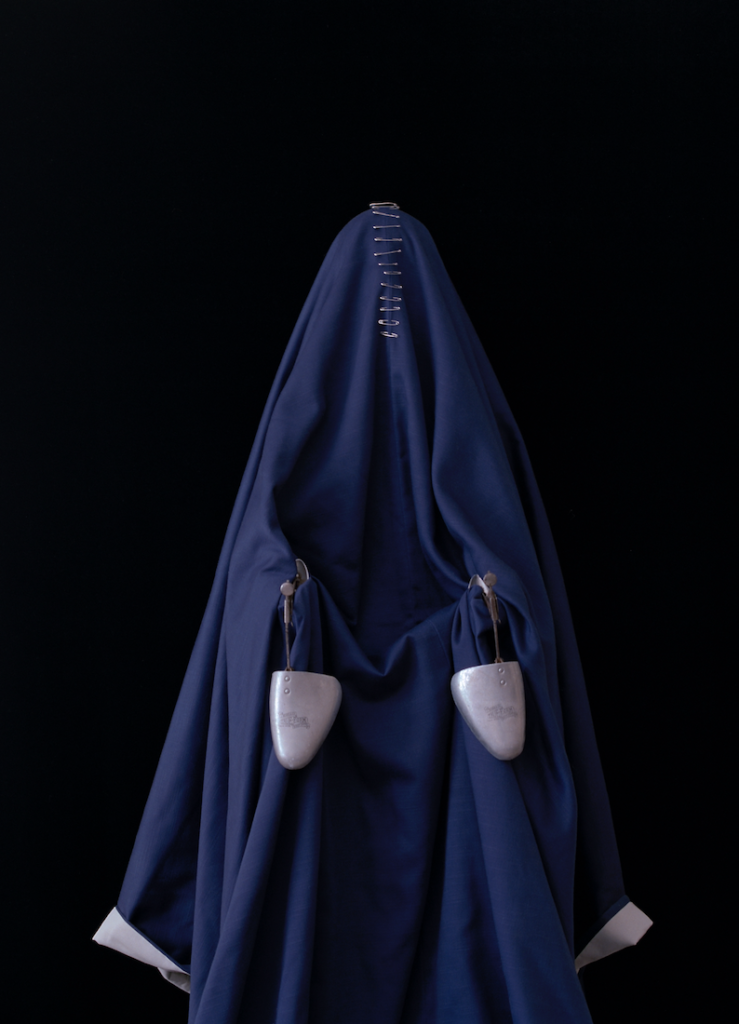 Louise Fago-Ruskin is an artist, writer, and lecturer in photography and critical and contextual studies at Plymouth College of Art in Devon, England. Her work has been exhibited at the Hyères Festival of Fashion and Photography, the Arles Photography Open Salon, Parallax at La Galleria in London, and Galerie Sakura in Paris.