The fatal thing about these acted poems was that they continually added to and extended themselves, growing to tens of thousands of verses, so that ultimately the time in them was the actual time; somewhat as if one were to make a globe on the scale of the earth.

I HAD BEEN TWENTY-FIVE YEARS OLD when I left my country and a career in the Israeli air force and came to America to pursue my childhood dream of becoming an architect. Little did I know that I would raise three boys here and come to call this place home, or that my love for poetry, the influence of the Hebrew language, and my experience as a helicopter navigator would shape my creative life.

What is the secret of this journey? Perhaps it is the line itself, the beginning of both aerial navigation on a map and the drawing of an architectural plan. Or perhaps it is the structure of words and letters of the ancient language, which can be moved about like building blocks to create new meaning. Or is it the memory of forms and colors of the land below, or simply the desire to fly? 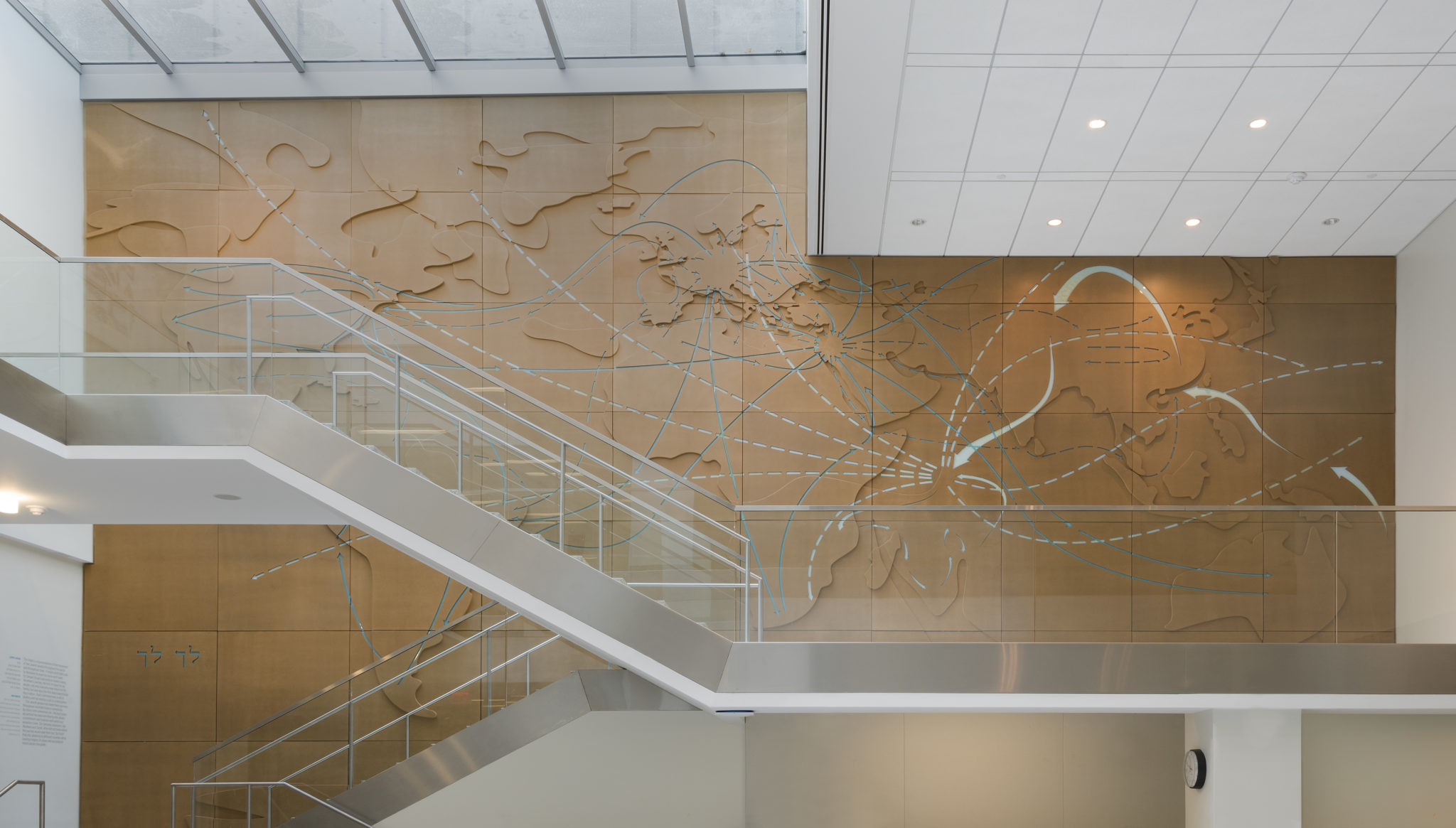 Twelve years ago, I was one of a group of parents responsible for the construction of a new building for the Abraham Joshua Heschel School in New York City. While walking my kids to school in the mornings, I would often recite the words of the great rabbi and scholar of Jewish theology for whom their school was named: “Above all, remember that you must build your life as if it were a work of art.” Inspired by this mantra, I asked to design and construct two parts of the building: the art wall of the entrance lobby and the beit knesset (or synagogue), the main praying space for the community.

The lobby at the Heschel School was conceived not as a transitional space to pass through, but rather as a place to linger and connect—a place of engagement for both children and adults, where extracurricular and informal activities become an integral part of learning. As such, the lobby is a generous double-height space. Light flows in from the east, where the early childhood kids can look down from their third-floor protected outdoor playground, and the west, where the main entry is located.

The lobby’s southern wall comprises a map, its design based on the Hebrew phrase lech lecha from the book of Genesis, with which God commanded Abraham to leave his home in Mesopotamia and travel to the land of Canaan to form a new nation. The common English translation, “Go forth,” is very different from the literal Hebrew. Lech means “go,” and lecha, “to you.” This deceptively simple phrase has numerous wrinkles. What does it mean to go to oneself? To fulfill one’s destiny? To go where one truly belongs? Or to go where one will become oneself? Jewish tradition has often emphasized the internal, psychological dimensions of God’s command, which involves Abraham “collecting himself” as he undertakes a triple separation—from his country, his homeland, and his father’s house.

While making the map, as I reflected on the separations that have been part of my own journey, I realized that learning can be understood in a similar way, on multiple scales, as a journey away from familiar ideas and situations into a new, uncertain territory. When we learn, we traverse space conceptually and emotionally as well as geographically and culturally. 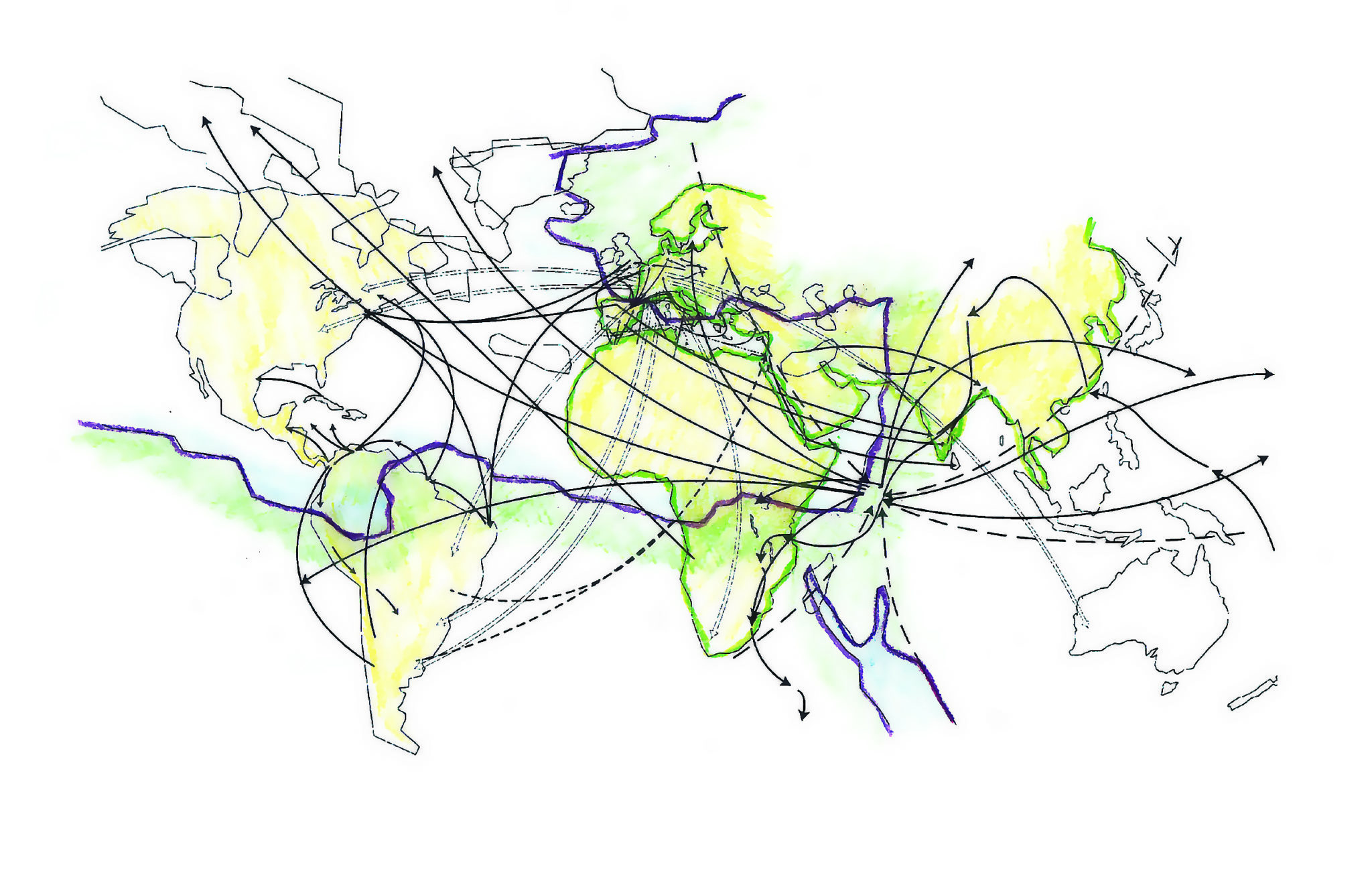 The wall, constructed as a grid of sixty-four panels, shows two overlaid maps on different scales—one of the Middle East and Mediterranean Basin, one of the whole world. The panels are inscribed with the journeys of the Jews from the sojourn of Abraham up to our present day. The first layer, from the times of biblical antiquity, depicts the journeys from Abraham until the destruction of the second temple in Jerusalem in 70 AD and the exile that followed. The journeys are drawn in light blue. The second layer, from 70 AD to our time, describes the shifting tides of Jewish immigrations over the last two thousand years. These journeys, which took Jews to all corners of the globe, are drawn in dark blue. In both layers, journeys to the land of Canaan, the Promised Land, are marked with solid lines, while journeys out of Canaan—whether voluntary or forced—are dashed lines.

Together, the overlaid maps create a new, abstract image documenting the life of the Jewish people. Emerging from the journey of Abraham, from a single family to a nation, the map is a reminder of the multiple meanings of both the idea of a journey and of the Promised Land. The journeys on the map are a blueprint for a turbulent history of desire and survival, real life and dreams, faith and longing for new paths. 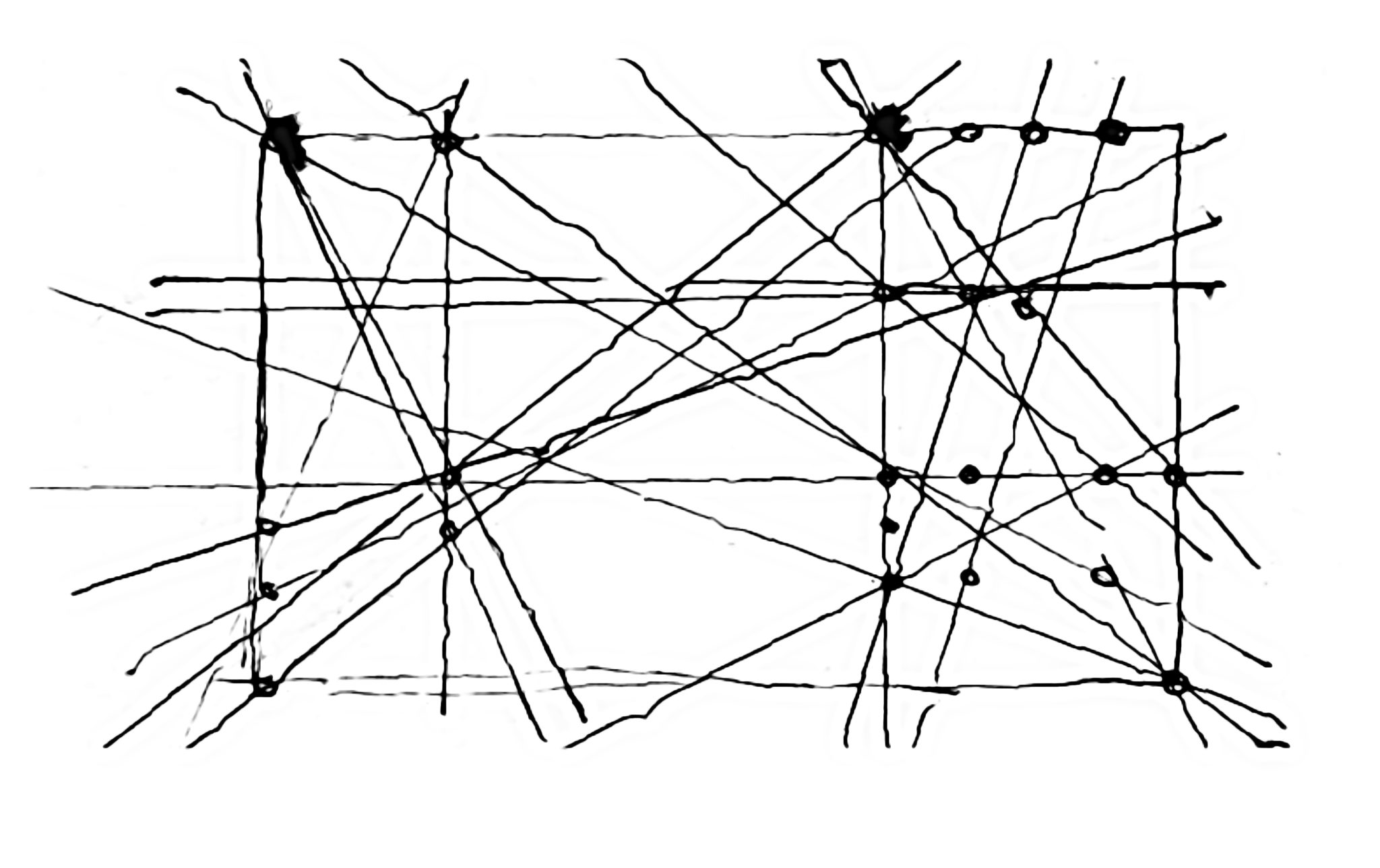 There I was, flying again, my map unfolded, suspended between a blanket of stars and the lights of the city beneath me. The silent, dark desert below, the cradle of the moon above, the whispering night wind, all spelled home to me.

Eighteen years earlier, I’d been a student at the Cooper Union in New York City. During a visit back to my parents’ house in Omer in southern Israel, I had discovered a map of the Promised Land in an archaeology book. It was drawn by the eleventh-century French rabbi known as Rashi, one of the most imaginative Bible interpreters in history. He never visited Israel, but instead based his map on a sentence from chapter 34 of the Book of Numbers, which describes the boundaries of the Negev, the southern part of the Promised Land, and the journey the Israelites took through the desert to settle there.

Rashi’s map, drawn in bright red, is an abstract schematization of the places and the journey, rendered in the proportions of the golden ratio. It reminded me of a Mondrian painting. It also looked remarkably similar to plans drawn by one of my favorite architects, Giuseppe Terragni, for an unrealized museum and library honoring the poet Dante. Working in Como, Italy, in the 1930s, Terragni based his plans for the “Danteum” on the structure of the Divine Comedy and its interpretation of symbolic numbers.

Investigating Rashi’s map, I quickly realized that while the Promised Land was drawn as the only square, the Israelites’ actual destination—the Negev—was absent, though it could perhaps be outlined by drawing diagonal lines between the places the Israelites passed through on their journey. This idea of a physical place defined by the paths of its inhabitants—which could be manifested by mentally folding a map—became the foundation for my design of the beit knesset, itself a sacred space. The new folds I imagined became for me a metaphor for the hidden, indefinable relationships the space would hold—the informal, unexpected connections that are so vital to the forming of a community. The lines on the folded map were a blueprint of the community’s roots, but they also held the secret of its potential to evolve. 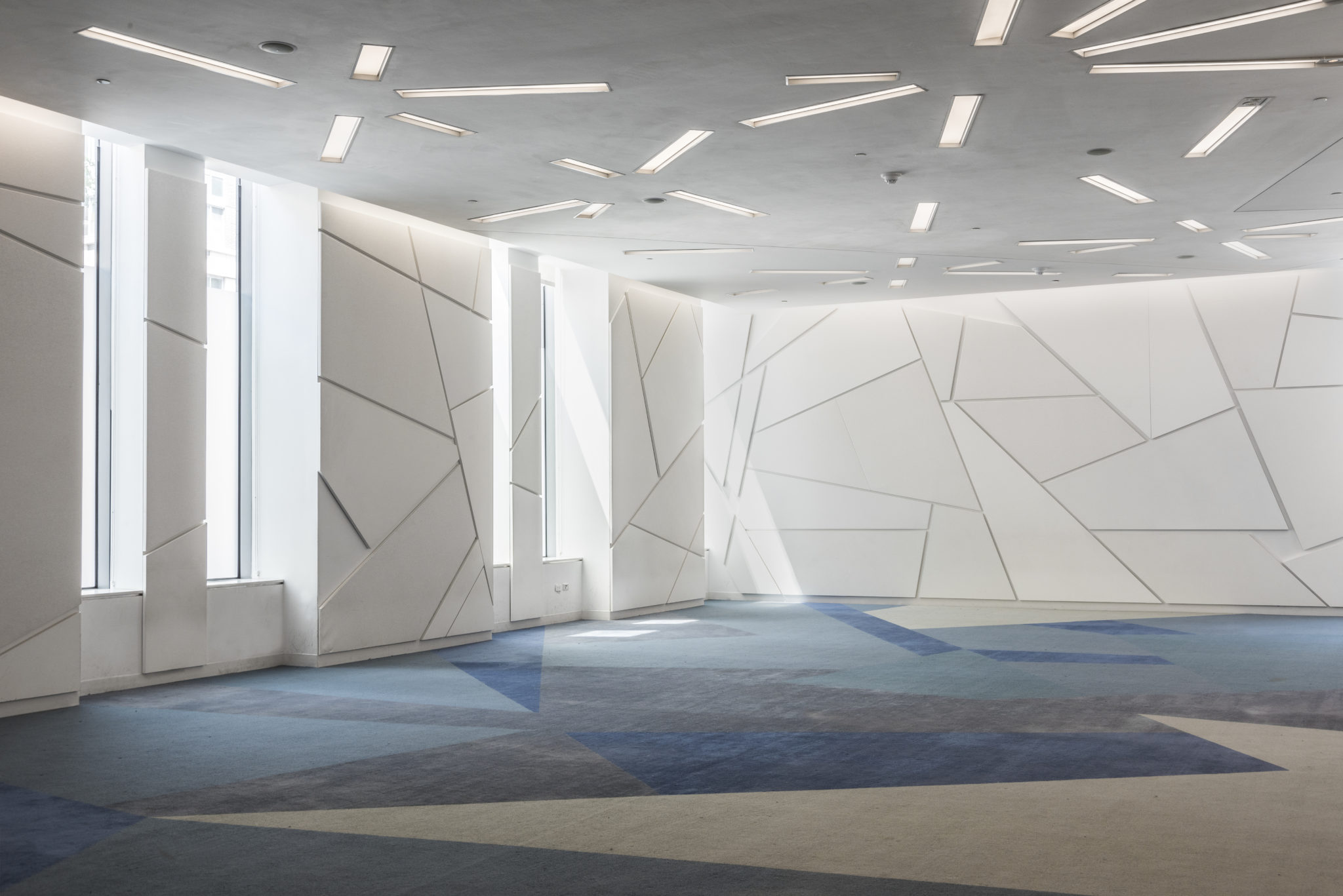 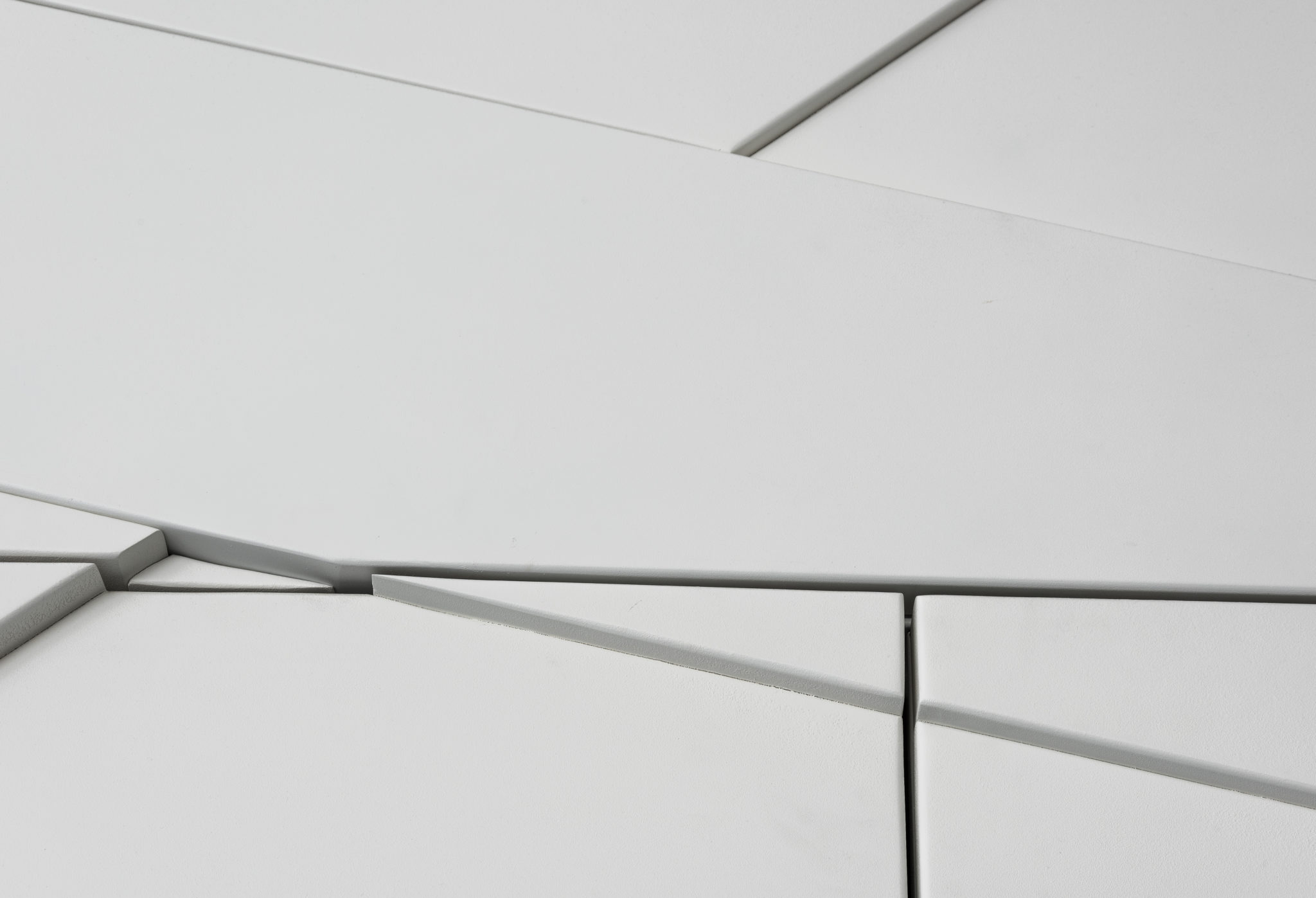 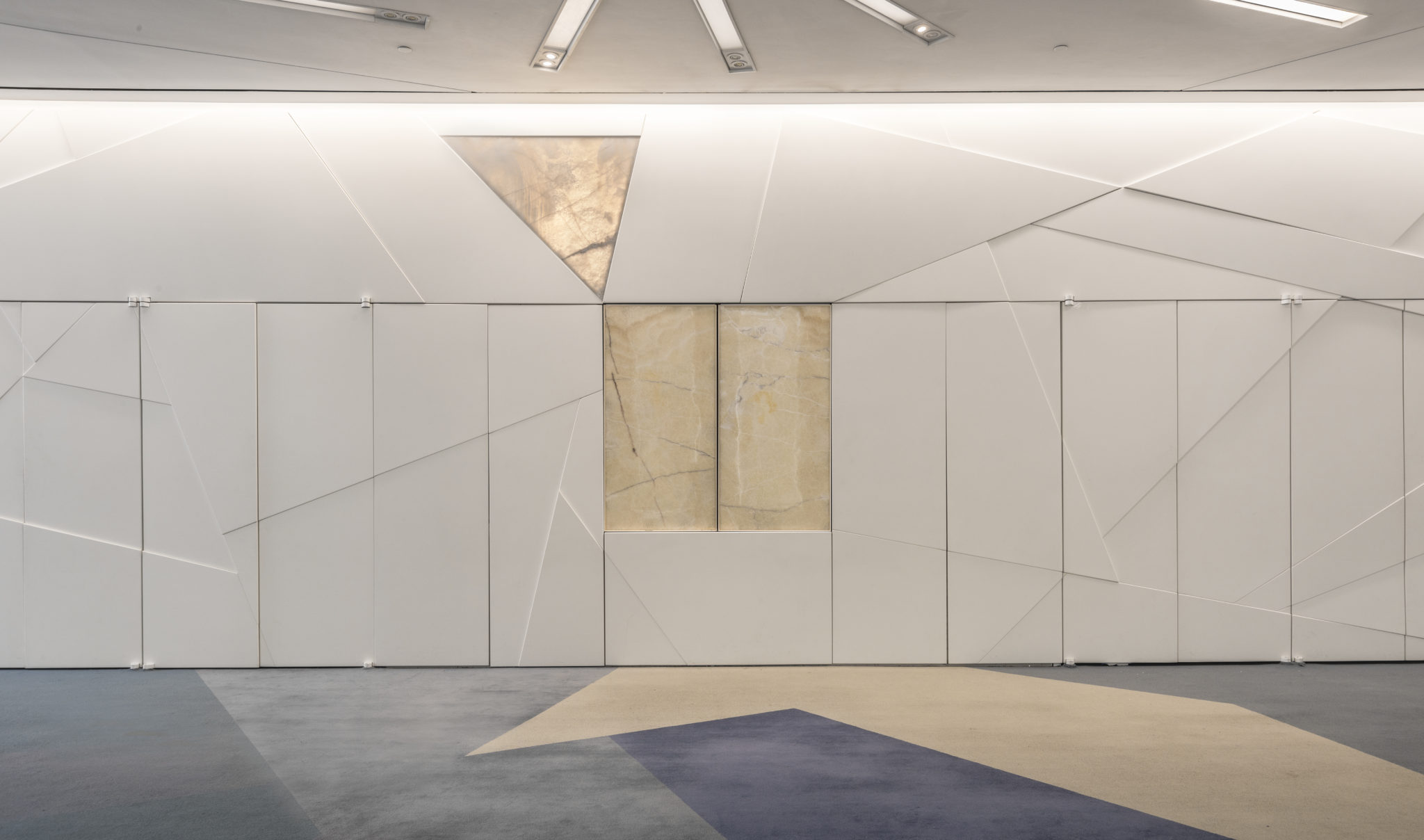 Three of the room’s walls are composed of panels of four different materials: fabric, acoustical tile, painted fiberboard, and metal. Since the room also serves as a music classroom, these materials provide the required acoustics. The colorful geometric forms on the carpet are also derived from the forms of the folded map, and the lighting pattern on the ceiling follows the intersections that created those folds. The fourth wall, the one facing east toward Jerusalem, is three-dimensional, made of folded white metal panels that vary in depth. At its center, two slabs of translucent onyx stone form the doors of the ark containing the scrolls of the Torah, the essential element of the room.

The ark, the only flat element of the east wall, is also the only square in the room. It is inspired by the square Rashi used to represent the Land of Canaan. As the symbolic locus of Jewish identity in the diaspora for generations, the ark in every synagogue in effect transports the memory of the Holy Land, planting it in new lands. I came to see the ark in this space as a kind of well at the heart of an imaginary landscape, the symbolic source of life, and the folds in the wall as streams. This metaphoric landscape is a constant reminder of the longing for the physical Holy Land, perhaps best described by the Israeli poet Avot Yeshurun in “The Theory of Longing”:

The school was opened in September 2012, and in March 2013 the room was inaugurated with the bar mitzvah celebration of my second son, Itamar. All of us sat facing east. We sang “What a Wonderful World” and read about God meeting Moses.

As Itamar donned his prayer shawl, we learned from a poet that a tallit has stripes because “stripes come from infinity and to infinity they go like airport runways where angels land and take off.” Wrapped in his tallit in the light of dusk, Itamar carried the holy book around the room. The people were singing. The lines on the walls came alive. On the eastern wall, the square doors of the ark were open, and for a moment, my whole world was inside.

Ran Oron is an Israeli-born architect and artist currently living and working in New York City. He is founder of the architecture studio ROART.