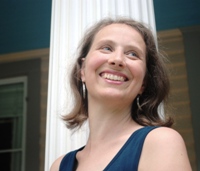 Anya Silver’s poetry belongs to the ancient tradition of meditation on the name of God—not as a way of containing and owning God, but as a way of entering into communion. Her work is pervaded by a longing for the divine that is at once specifically located in small, ordinary things, and deeply mystical. Alive to the rhythms of both nature and liturgy, she sees the possibility of transcendence everywhere, not only in the Torah and the sacraments, but in insects, the pealing of bells, tree boughs, pastry, and the human spine. Her smart, lucid, sometimes playful language and her gorgeous but unlabored images win the reader to her way of seeing; that is, to an openness to finding beauty in unexpected places. Her voice is straightforward, her poems refreshingly intelligible and unapologetically pleasing, even pretty, but her proposal is profoundly mysterious and even a little frightening: For her, and for us when we are with her, everything in the world has the potential to offer a kind of image for prayer—and that therefore prayer is possible everywhere and in everything.

Some of Silver’s work is featured in Image issue 60 and issue 66. Read a poem by Silver here.

Anya Silver has published one book of poetry, The Ninety-Third Name of God (Louisiana State University Press); a chapbook, Saints of Autumn (Redbone Chapbooks); and a book of literary criticism, Victorian Literature and the Anorexic Body (Cambridge University Press). She was born in Swarthmore, Pennsylvania and was educated at Haverford College and Emory University. She teaches in the English Department of Mercer University and lives in Macon, Georgia, with her husband, Andrew, and son.

My first collection of poetry, The Ninety-Third Name of God, has just been published by the Louisiana State University Press. I am currently working on completing my second collection, tentatively entitled Strange Myrrh, after a sermon by the 14th century mystic Johannes Tauler. After several years of remission, I was recently diagnosed with a recurrence of inflammatory breast cancer. Treating cancer requires an enormous investment of time–hours every week spent in waiting rooms and receiving infusions—that inevitably distract from the craft of writing. However, cancer has also provided me with what Emily Dickinson called “a flood subject.” Poems about cancer keep coming to me even when unbidden, wanting to be written. Having cancer has become a vocation, albeit one that I would have preferred not to accept: I feel a special calling to write about physical (and mental) afflictions in a society that worships the whole, the healthy, the young. I often think of Adam Zagajewski’s poem “Try to Praise the Mutilated World” as encapsulating what I attempt to do in my work: to express my love for this baffling, infuriating, miraculous world and, by extension, its Creator.