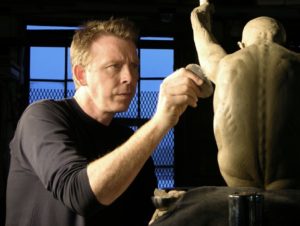 David Robinson’s precarious sculptures confront us with the human figure in extremis. Carrying heavy loads, suspended in mid-air, wobbling along beams, pulling themselves over obstacles, desperate not to fall, his sinewy bronze nudes serve to remind us of our own contingency. But these are not images of futility or despair. The figures are beautiful, and in that their labor attains an unarguable dignity—even when it consists in striving under absurdly impossible circumstances. Around here, we see the whole thing as a metaphor for running a literary magazine, and so David Robinson is one of our household saints.

David Robinson demonstrates a great command of media and skill as a figurative sculptor. His sculptures embody a modernistic approach to a very classical domain in art—the nude. Expressed through his noteworthy skill, Robinson’s deep reverence for imagery and symbolism allows the viewer to participate in the allegorical through contemporary form.

These striking sculptures incorporate materials ranging from traditional bronze, iron, steel and silver to polymer-gypsum, cement and hydrostone and range from intimate to overwhelming in scale. While Robinson’s work is primarily figurative, he often adds psychological and mythological elements to his subjects through the use of strings, cables, and precarious perches, which both connect and dissociate his figures from their environment and further describe their inherent tension. Robinson’s sculptures explore dichotomies such as gravity and flight, religion and secularism and individuality and mass culture. Through his artistry, he is able to bridge these massive discordances into single poetic gestures.

David Robinson studied Fine Art at The Central Technical Institute and Vancouver Community College. In 1987 he attended the Ontario College of Art and earned his Graduate Honours in Sculpture. Robinson has exhibited nationally and internationally. He has been commissioned to produce a multitude of large-scale public and private works. Robinson’s sculptures have been collected by many high profile corporate and private collections, such as Concordia University, CA, Four Seasons Hotel, BC, Hotel Arts, AB, Notre Dame College, ON, and Rosewood Hotel Georgia, BC. He lives and works in Vancouver.

In addition to the ongoing making, exhibiting and commissioning of artworks for private collectors and gallerists, I’m also currently working on a number of large-scale, commissioned public art projects. Two of these include: a sculptural installation for the Gordon and Leslie Diamond Health Care Centre in Vancouver BC, and a public art commission in Fort McMurray, Alberta.

The Diamond Health Care Centre project is titled Windward Calm. Having recently spent some time at the Vancouver General Hospital as a cardiac surgery patient, I found myself in a weekly orbit of appointments around this impressive healthcare facility. Within its lofty glass atrium one is soon aware of fellow patients and the shared experience of waiting… The memento mori /memento vitae of major surgery and a long convalescence triggered in me a desire to produce an artwork for the benefit of my fellow patient travelers in that place. As with all of my larger works, there is a conversation between the structure of the building and the sculpture. A lone female figure kinetically suspended aloft within the shell of a small sailing craft, the piece invokes the flux of storm and calm that are so much a part of the human experience there:

This work, Windward Calm, calls into service the motif of breath—the latin term for which is spiritus. The indwelling spirit of this place is that of care; humane and organic… its living breath is the spirit of human care without which it is all just cold machinery. … these two vessels, body and soul, aloft in countervailing vortices of gravity and of grace.  The slow turning, rise and fall; breath as wind, as spirit, as the rising and falling, bodily incantation to the divine within us.  We lean into the wind and find ourselves navigating realms unknown and older than the living oceans.

The Fort McMurray public art project is called Reflections on the River. Framed against a stunning sunset view of the Athabasca River, this work includes a broad plate of Corten steel rising 20 feet out of the ground, cut and curved as the meandering oxbows of the wandering water it mirrors. Both canoe and figure are sculpted in an open lattice of metalwork—intended not as opaque historical depiction, but as open aesthetic reflection. Though the typical language of monumental public sculpture is often focused on memorializing some particular personae or event, this work seeks instead that greater distance from which we might see not a human but humanity—not a river, but the cultural connectivity of rivers.

As with any large undertaking, these works involve the interaction and participation of many others, oftentimes a large team including architects, designers, engineers, funders, consultants and fabricators. It occurs to me that these many and layered interactions are not so different from the sculptor’s craft itself. From wood to wire to clay to bronze, concrete and steel—this myriad alchemy of interactions in matter are a reasonably good analog to the countless collaborations and negotiations as we journey from vision to manifestation. Remaining vibrantly engaged and invested in the process, my hope is that these artworks will bring some benefit to the lives of those they encounter. 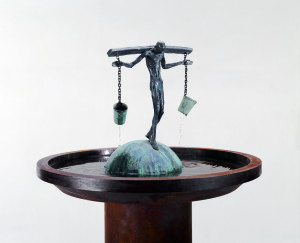 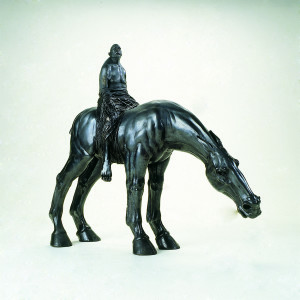 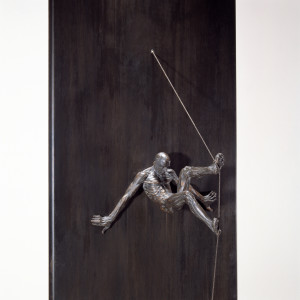 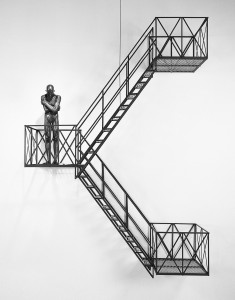 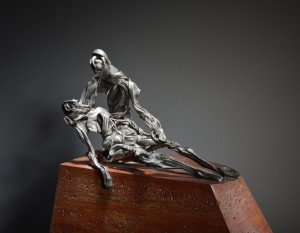 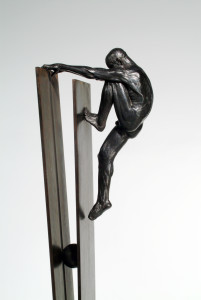 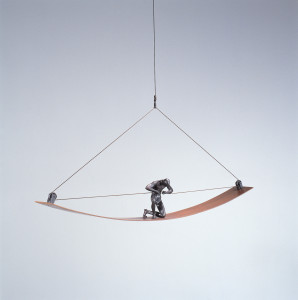