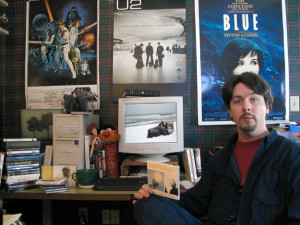 Jeffrey Overstreet is a trespasser. He’s constantly moving outside of the borders of what church and culture deem to be ironclad, eternal categories (sacred vs. profane, high culture vs. popular culture)—and he has a knack for bringing people along with him. His passport? The imagination. In his writing on film, he has used the mighty megaphone of Christianity Today to challenge its readers to take a more mature, holistic approach to film. His film criticism doesn’t count swear words or anatomical parts; rather, it speaks of beauty, paradox, and what it means to be human. Overstreet has pursued this vocation with such integrity and forcefulness that the secular media have picked up on it—precisely because he dares to trespass against the arbitrary categories of what is deemed “religious” and what is considered “public.” He brings this spirit of freedom to all that he does, from his many illuminating posts on various online message boards to his writing for Seattle Pacific University ‘s publications to his newest venture: fantasy novels. Even there he’s crossing boundaries, bringing a more literary sensibility to a genre that’s often mere swords and sorcery. When you trespass with Jeffrey Overstreet, you don’t have to ask for forgiveness.

Some of Overstreet’s work is featured in Image issue 42, issue 60, and issue 78. Read an excerpt by Overstreet here.

Jeffrey works at Seattle Pacific University and lives in Shoreline, Washington, with his wife Anne Maureen Doe Overstreet. Evenings and weekends, you’ll find them in area coffee shops and walking along Richmond Beach, dreaming up whatever they’re going to write next.

Jeffrey Overstreet never kept diaries as a child — instead, he chronicled everything he read, watched, and listened to in homemade magazines about his life. At the same time, he wrote stacks of adventure stories, and proceeded to critique their weaknesses mercilessly in his “periodicals.” Thus, from the age of eight on into adulthood, he had one foot planted in creativity and the other in criticism.

After earning a B.A. from Seattle Pacific University in English Literature in 1994, he began publishing film and music reviews in a magazine called The Crossing, a publication he edited for Promontory Artists Association.

This led to the development of LookingCloser.org, a widely-read Web site of his reflections on film, music, literature, and concerns regarding faith and art. Since 2001, he has written “Film Forum,” a weekly movie column for the award-winning ChristianityTodayMovies.com. His reviews and filmmaker-interviews are frequently published at that Web site, and also in Paste Magazine and Seattle Pacific University’s Response magazine. In 2004, he wrote about the future of film for Image, and was the subject of a cover-story feature in The Seattle Times’ Sunday magazine Pacific Northwest. Jeffrey frequently discusses movies on radio talk shows in Washington , Oregon , and Wisconsin, and he has recently presented a seminar to area churches and SPU entitled “How to Chew Your Movies.”

It has been an extraordinary year; I am boggled by unexpected blessings. WaterBrook Press, a division of Random House, will publish my first fantasy novel, Auralia’s Colors, in 2007, and a sequel soon after.

A glutton for punishment, I’ve also written a non-fiction book, a “moviegoer’s travel journal,” in which I examine great films that have been overlooked, and share anecdotes from my conversations with filmmakers and moviegoers. It’s called Through a Screen Darkly: Looking Closer at Beauty, Truth, and Evil at the Movies. Regal Books will publish it in early 2007.

Auralia’s Colors is a fantasy novel written for readers teen to adult. It’s the story of a young artist, a girl from the wilderness who introduces her mysterious work into a society that restricts the use of color. Her work is so marvelous and daring, it calls into question the governors’ methods of control. To make matters worse, when the king inquires about her origins, Auralia responds with specific references to a mythical figure that the governors have labeled as taboo. This enthralls the people of the kingdom and infuriates the king. But the prince, Cal-raven, is intrigued, setting the stage for a conflict that brings devastating consequences. What results is a reflection of the way human beings abuse their gifts and resources in order to gain control over each other, and how art can teach, humble, challenge, and remind us of our proper place in a higher, grander design.

Thanks to recent Hollywood blockbusters and a certain British children’s writer, fantasy is a thriving industry. Nevertheless, even as book sales soar, the success of fantasy films has had a detrimental effect on the genre. Most published fantasy is focused on fast-paced action, dramatic sorcery, and fantastical beasts. As a writer and a reader, I am primarily interested in the pauses between the outbursts of action…quieter moments often ignored and forgotten in adventure storytelling. The books I loved as a child were as much about the beauty of language as they were about thrills. There was a rhythm and rhyme in their style. I strive to write in that tradition. After all, good storytelling reflects God’s grand design not only in plot and metaphor, but in its aesthetic excellence and musicality as well. I aim to contribute to a tradition established by Tolkien, Lewis, and L’Engle, and I still have much to learn from them.

In the meantime, I’ll continue writing about movies at LookingCloser.org, ChristianityTodayMovies.com, Seattle Pacific University’s Response, and Paste Magazine, as well as contributing to an upcoming compendium of film reviews by various Christian film critics.

I would not have these privileges and opportunities if it were not for my wife Anne, for her benevolence, patience, generosity, and editing; my parents, Larry and Lois, who raised me in a mountain range made of library books; my brother Jason, for listening to my earliest novels; my Uncle Paul, who first took me to see “Star Wars”; my agent Don Pape, for his support and enthusiasm; Shannon Hill and the good people of WaterBrook Press, for recognizing Auralia’s potential; Alex Field and his colleagues at Regal Books for appreciating the power of movies; Marsha Marks, the woman who literally dropped out of the sky and gave me a golden ticket; Linda Wagner, my guardian angel; and others who have been relentlessly encouraging — the Milton Center @ Image journal, Ted Olsen and Mark Moring of Christianity Today, Greg Wolfe of Image, Danny Walter, Beth Harris, John and Margaret Edgell, Peyton Burkhart, Pastor Michael Kelly, Nathan and Sarah Partain, Steve Lansingh, Jennifer Gilnett, Steven Greydanus, Peter Chattaway, Fritz Liedtke, and four life-changing teachers Michael Demkowicz, David Robinson, Luke Reinsma, and Rose Reynoldson. To name a few.