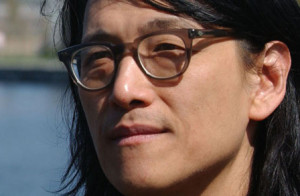 Since his first poetry collection, Rose, was published in 1986, Li-Young Lee has produced an acclaimed body of work that is equally lyrical, personal, and spiritual. Much of his work reflects the dance between the powerful influence of his father, a Taoist convert to Christianity who became a minister, and his own, more mystical expression of his inherited faith. Graceful and approachable, his poems seem simple at first, but become dizzyingly profound. They draw imagery largely from the Bible and the story of Lee’s own family, who immigrated to Pennsylvania from Indonesia by way of Hong Kong and Japan. Lee’s approach to Christianity is unorthodox but deeply reverent. In an interview in Image issue 86, he describes the way the practice of poetry allows us to see that “Everything is saturated with God.” His poem “Folding a Five-Pointed Star….” from the same issue reflects his central belief that the incarnate, suffering God is hidden everywhere: “And the sorrow we bear together is none of ours. / Maybe it’s Yours, God. / For living so near to Your creatures….” The poem was chosen by Edward Hirsch for Best American Poetry 2016.

Read our interview with Li-Young Lee here, and read his poems from Image issue 86 here, here, and here. Lee will teach a poetry workshop this summer at the Glen Workshop.

I was born in 1957 in Jakarta, Indonesia to Chinese parents.  After suffering violent persecution due to anti-Chinese sentiment, we escaped the country and eventually found refuge in the United States of America.  I presently reside in Chicago, Illinois, with my wife and two sons.

I am presently working to finish a chapbook manuscript entitled “The Word From His Song,” due out from BOA Editions, Ltd. in a month or so, as well as the manuscript to a full-length collection of poems entitled “The Undressing,” to be published by W.W. Norton in the near future.