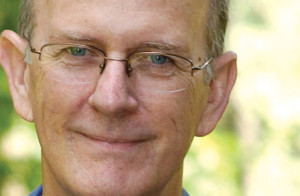 Mark Jarman probably wouldn’t think of himself this way, but he is a courageous man. And courage is a rare commodity at any time, and especially so in the small, competitive world of American literary culture. As a champion of the formalist tradition in poetry and as a writer unafraid to place religious faith and doubt at the center of his work, Jarman has put himself at odds with many of the prevailing trends of our time. Yet for all this, his poetry does not propagandize, preach, or promote an agenda. His poetic diction and form tread the fine line between the artist’s control of language and thought and the uncontrollable realities of doubt, fear, and desire. His work is intelligent without being pedantic. The language is direct. Here is a poet who, unlike J. Alfred Prufrock, is willing to ask the Overwhelming Question.

Jarman’s awards include a Joseph Henry Jackson Away for his poetry in 1974, three NEA grants in Poetry in 1977, 1983, and 1992, and a fellowship in poetry from the John Simon Guggenheim Memorial Foundation for 1991-1992. His book The Black Riviera won the 1991 Poets’ Prize. Questions for Ecclesiastes was a finalist for the 1997 Nation Book Critics Circle Awards in poetry and won the 1998 Lenore Marshall Poetry Prize from the Academy of American Poets and The Nation magazine.

His poetry and essays have been published widely in such periodicals and journals as The American Poetry Review, The Gettysburg Review, The Hudson Review, The New Yorker, Poetry, and The Southern Review. During the 1980s, he and Robert McDowell founded, edited, and published the controversial magazine The Reaper. The Reaper Essays (Story Line, 1996) collects the essays they wrote together for the magazine.

“It is impossible to finesse the muse. But the projects I have completed include two books of my essays and reviews, both forthcoming this year: The Secret of Poetry from Story Line Press and Body and Soul from the University of Michigan’s Poets on Poetry series. I have also finished a book of prose poems based very loosely on the letters of St. Paul. The book’s working title is Epistles, and it should be heading to the publisher soon. Meanwhile the year ahead holds work on a memoir concerning the time I spent in Scotland as a child. And if the muse can be tempted, new poems.”