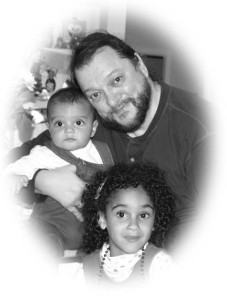 Nicholas Samaras reminds us of the British sculptor who fills empty rooms with plaster (or some liquid that turns solid) and then exhibits the shapes of the empty space. Instead of seeing the boundaries and edges of things we see the space between—the space in which we live and move and have our being. Poems by Nicholas Samaras are like that. They see and say what lies between us but which so often is invisible to our eyes and hearts. Samaras gives shape and volume to silence, to pain, to holiness—the hidden things that haunt the visible world yet make it possible. A recent poem of his is a perfect exemplum of this. It’s called “The Vocabulary We Could Not Use” and we wish we had published it. The poem is about grief and the inadequacy of language. And yet it proves that poetic circumlocution can often tell us more about the world—and ourselves—than any straight-on statement could ever do. Read the poetry of Nick Samaras and experience the space between us as a palpable form, humming with grief…and grace.

Some of Samaras’s work is featured in Image issue 39 and he offers online classes at the Glen Online.

Nicholas Samaras’ background is multinational and multicultural. Of Greek-American and European parentage, he was born on Rudyard Kipling’s estate (“Wimpole Park ”) in Cambridgeshire, England, raised there and on the island of Patmos, Greece (the island where St. John composed the book of Revelation). His first book of poetry, Hands of the Saddlemaker received the Yale Series of Younger Poets Award. His individual poems have been featured in The New Yorker, The New York Times, The Paris Review, Poetry, The New Republic, Kenyon Review, etc. He earned his doctorate from the University of Denver. Mr. Samaras now lives with his family in Tampa, where he teaches at the University of South Florida in the new Creative Writing Masters’ Program. In the summer of 2005, he taught in Florence, Italy.

From the summer of 2004 to January of 2005, I wrote a complete book of poetry for the Slovakian poet and translator of German poetry, Svetozar Daniel Simko, who passed away July 8th, 2004. The journey of the writing took me from New York City to Germany, to Salzburg, Austria, to Greece, to Patmos, to Rhodes, to the Holy Mountain of Athos, to the Czech Republic, and all the way back to America again. Since that writing, I have spent time polishing and revising the book, and now feel it is ready to approach a publisher. Two of the poems were published quickly in the New England Review, and the others are ready to be sent out for consideration. I find it rare for an entire book to be written about one individual but, in that focus, I found the world and found a way to keep a brother alive. In the ensuing months, I have been teaching Simko’s poetry to my students at the University of South Florida, and they have been radicalized, which gratifies me and verifies what I always knew about Daniel Simko’s stellar poetry. Currently, I am in a fever-pitch of writing new works: I am half-way through with the writing of a textbook of poetry; I am working on a memoir of a year that was life-changing for both myself and America; and I am working two full-time jobs in order to make one salary. With the life and example of my best friend, Daniel Simko, I am forced to be mindful of every breathing second. We come so briefly to this place. I am driven now to pay attention to every second, to be with my family, to see my children grow, to be grateful for every moment I can stop and think and pray and pay attention to the world. The autumn is now here. Each evening, my wife and I sit with our children as they recite their prayers before sleeping, and kiss the icons and each other goodnight. Each day I drive Anastasia to her second grade, I stop and pay attention to her singing, pay attention to the white ibises and to the pale moon in the morning sky.