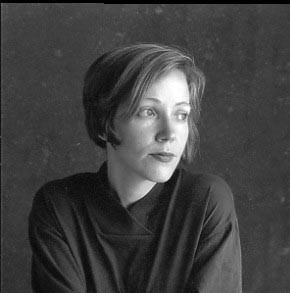 Patty Wickman is a painter who creates haunting scenes—and we mean haunting in the old-fashioned sense: suffused with awe and transcendent mystery. She combines pictorial realism with two related concerns: close observation of human psychology and an abiding sense that psychology must be complemented by something else, something that can only be called spirituality.

Some of Wickman’s work is featured in Image issue 25. Read more about Patty Wickman and other Image artists here.

Read reviews of Patty Wickman’s most recent shows from the L.A Times, the L.A. Weekly, and ArtScene.

“In November and December of 2001, I exhibited a body of work at Hunsaker/Schlesinger Fine Art in Santa Monica, California, part of an on-going investigation of representation and pictorial narrative. Specific to this new work was the act of revelation, a theme that loosely linked the three large-scale paintings and related drawings and paintings in the exhibition. That which was revealed lay outside the painting, or was in the process of occurring, or being comprehended, within the painting. The structure and facture of the paintings themselves underscored this theme: the preliminary drawing and underpainting was revealed or obscured to varying degrees, emphasizing various aspects of content. Much of the preliminary research for the work was rooted in biblical literature and the variety of literary devices employed therein, from the poetry of the Psalms to the use of parable in the Gospels. These paintings sought to establish a relationship and dialogue between biblical literature and contemporary culture. Additional pictorial and conceptual sources were gathered from a variety of found images, ranging from art historical imagery to magazines, postcards, and newspaper clippings. The final pictorial sources for the paintings were derived from photographs that I staged and produced. Much of the work included in the Santa Monica exhibition will be also be featured in a solo show at the Carol and Robert Bush Art Center at St. Norbert College in De Pere, Wisconsin, in March of 2002. In addition, one of the large paintings from the exhibition, Summons, will be included in a group exhibition curated by Michael Duncan at the San Jose Museum of Art in November of 2002. New, smaller pieces will also be part of a group painting exhibition at Hunsaker/Schlesinger in the summer of 2002.”