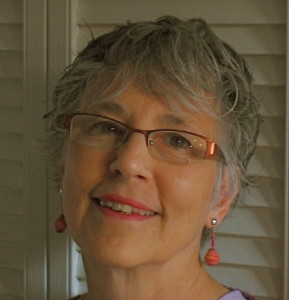 For most people nowadays, literary critics are suspect: they’ve deconstructed so much that we’re not sure we want to be in the same room with them. Peggy Rosenthal is different. She’s got all the classic hallmarks of a great critic: lucid and enthusiastic, she sends you back to the original material armed with passion and knowledge. Both as an anthologist and as an interpreter of modern poetry that embodies some sort of spiritual search or struggle, Rosenthal has introduced readers to an enormously rich body of work. And her insights into the literary and religious meaning of that work are graceful and memorable. That’s why we’re delighted that Peggy will be teaching a seminar on poetry and spirituality at this year’s Glen Workshop.

Some of Rosenthal’s work is featured in Image issue 32, issue 55, issue 65, and issue 77. She is also a contributor to Image‘s Good Letters Blog. Read a book review by Rosenthal here.

Peggy Rosenthal is co-director, with David Impastato, of the nationwide arts ministry, Poetry Retreats, through which they offer workshops and retreats on using poetry for prayer, meditation, and spiritual enrichment. For more information, send an e-mail to: poetryretreats@juno.com She is also the Advisory Board of Imago Dei: Friends of Christianity and the Arts, an organization dedicated to cultivating relations between Christianity and the arts. For more information on Imago Dei, please click here.

Though Peggy began her career in academics with a doctorate in literature, after her baptism into the Roman Catholic church in 1983 she became increasingly interested in fostering literature—and especially poetry—as a spiritual resource. Her reflection guide Praying the Gosples thorough Poetry: Lent to Easter meditates on ten contemporary poems that offer a fresh angle on several beloved Gospel passages. Previously she wrote The Poet’s Jesus, a survey of how Jesus has been treated in mostly twentieth centruy world poetry, and co-edited an anthology of poems keyed to Gospel passages, Divine Inspiration; The Life of Jesus in World Poetry. Peggy’s essays and spiritual reflections have also appeared in Image, Corss Currents, Commonwealth, Christian Century, and America. Reviews of her writing praise her “profound sensitivity for things spiritual and literary” and “reader-friendly” style.

In everything I do these days, I’m trying to help people attend to “the words under the words,” as Naomi Shihab Nye puts it in a poem of that title. Poetry nurtures my soul because it draws me toward that silence where God speaks to us, beneath our society’s clamor. In the current climate of fear-driven violence, we desperately need to hear what God might be trying to say to us. The book I’ve just published with St. Anthony Messenger Press, entitled Praying through Poetry: Hope For Violent Times, gathers ten contemporary poems by people like Adam Zagajewski, Jane Hirshfield, and Scott Cairns, and reflects on how their words can draw us toward the hope which God promises.

As I suggested in “Why We Need the Arts in Times of War,” (Image #32), all the arts can heal and give hope to our souls. So I’m also collaborating now with a range of artistis (in dance, theater, music, and visual art) in a book sponsored by Imago Dei: Friends of Christianity and the Arts, which is designed to foster arts ministry in a very practical way.

Finally, as the dangerous climate in our country is pulling me into an activism that goes against my nature (I’d rather curl up at home with a new book of poems), I’m identifying with Denise Levertov and other poets who have agonized over how they should witness to healing and hope in their work and thier lives. So I’m thinking of writing a reflective essay on “Poetry and Politics.”