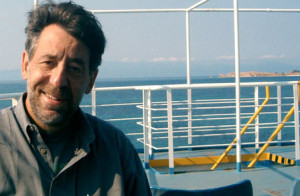 “I am working, as usual, on a new collection of poems. The current pile still seems too incoherent to suggest a clear direction. I have, however, entertained some guesses about how these poems might meet up—the central uniting trope of Byzantium, recovered from Mr. Yeats and, ideally, recuperated so as to serve theological as well as aesthetic concerns. The poems so far have been helpful, as well, in helping me articulate my other current project: a group of related essays which, if all goes well, may result in something very like the ‘sacramental poetics’ I kept hoping someone else might come up with. There is, as well, a novel-in-progress, which has spent a good deal of time on a back burner, but which has moved from 80 pages to 92 pages during the past year. Given that it’s taken me about nine years to get even that far, I’m guessing it’ll be a while before Which Tribe? Which River? sees either completion or the light of day.”